Call it Feng Shui, Chi, Balance, harmony or simply symmetry–
however you wish to view it or to name it, it is me and I am it.
I don’t know if I came preprogrammed this way or not,
but I am a very symmetrically oriented person.
Equally weighted and equally balanced.
None of this asymmetrical business for me.

And so it goes when I work on my own art.

I have always loved working with watercolors…
I like working with people, birds, nests, eggs, and you name it.
However, all my life I have felt that I have really wanted / needed to create
some type of opus, some sort of monumental tribute to God.

Why is that you ask?

Well, I think people who have talents and gifts—
well, they just don’t plop out of the sky.
A gift is just that—a gift…and it is something someone has given to someone else.
God has given me much, so what little I can give back…
well I’ve wanted to do it with a visual piece of art.

I’ve spent a lifetime looking at the Italian Renaissance masters,
passing later on to the Northern Renaissance…
with then the Germans and Dutch masters.
Powerful artists, who not only mastered body and mass,
but captured the epitome of emotion.
I can find myself in tears, full of emotion, while staring at various pieces.
I love the works of the Italian Caravaggio (see post What is an Icon).
Caravaggio’s Conversion of St Paul, or as it is actually known,
The Conversion on the Way to Damascus… is but one such piece.

The space is tight; the figures juxtaposed with precarious lines of placement
and the use of light, crucial light—
oh Caravaggio’s use of light…
Critics argue about the use of space with the horse,
Paul /Saul, the groomsman, too many legs, not enough focus on Paul, etc.
I must disagree with the “critics” as I find it powerful.
Very powerful!

It is my belief that because this is a tremendous moment in time and
that it is somewhat crammed into a tight space as the horse seems to precariously
control his mighty weight so as to not step on Paul…
who is splayed out on the ground beneath him,
as a sword is dropped to the ground, just as the stricken figure of Paul/ Saul
lies now defenseless having been struck blind…
It is because of all of this and more that seems to make this big moment even bigger.
It’s a millimoment in time that is captured… and it works—or at least works for me.
It makes me feel overwhelmed and leads me to believe that I am witnessing something that is
shattering time.
Oh those Italians——always masters of emotion——
the wonderful excess of such.

However as far as an artist who captures raw emotion with such vivid use,
there is none more so, to me, than the German Matthias Grünwald.
Who you ask?
A German, not an Italian?
All I ever talk about is my love affair with all things Italian and here I am suddenly
coming out with a secret German love?!
Yes.
I confess, a secret German love.

Unfortunately there is not much to the history books regarding Matthias.
He is a bit of an enigma.
His last name is really not his real last name.
As it seems a 17th century biographer inadvertently added Grünwald.
It is believed his name was actually Matthias Gothardt Neithardt.
He was born in Würzburg in 1480 but even that comes under question.
Who he studied under, who studied under him, all remains but a mystery.

The one thing that is not a mystery is Grünwald’s use of emotion.
We must remember that the artists of Grünwald’s time operated in a time even before
the printed word.
Images were everything;
they spoke volumes to the viewer—–their works, their paintings,
were the You Tubes of the day.
And yes, I like art that evokes emotion, passion and feelings–
why stare at something that speaks of nothing?

It is Grünwald’s Isenheim Altarpiece that, for me, evokes that tremendous emotion.
(again see the post “What is an Icon” as I’m taking from that post a tad) 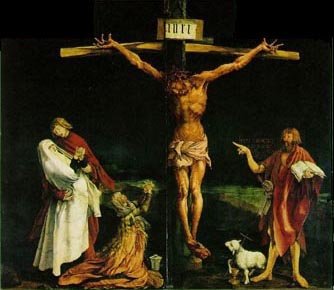 This is one of my most favorite images of the crucifixion,
as it shows not a languid image of an intact pretty European body of Christ seemingly
floating against a cross, but rather in contrast,
it shows in graphic, vivid detail the results of a deadly beating,
a body nailed, pierced, abused, now dead body in full rigor mortis—-
the altarpiece was commissioned for a hospital in Colmar (now France but originally in Germany)
for patients with various skin afflictions (most likely plague and leprosy and St Elmo’s fire).
Hope in suffering—
resurrection form death…
Glory and victory over sin.

It is believed that Matthias may have been a plague victim and perhaps he had seen the
Black Death up close and very personally…
leading to his apparent visual knowledge of the human body in the midst of the mystery
known as death.
It is also his vision of what transpires after that death which is also worthy of attention.

It is from my appreciation of Matthias, and other artists,
who can so realistically capture the emotional dramas of human life and death,
as well as the mystical beauty often found in illuminated manuscripts,
that has lead me on my own journey of exploration of such mysterious moments
in time through my use of the visual arts.

I started working on my “spiritual” pieces about 12 years ago.
They began with the idea of the cross, ancient medieval texts,
the use of biblical languages such as Hebrew, Latin, Greek, and Aramaic,
as well as the use of mysterious mystical images as teaching tools.

The latest piece is a Triptych—
hence my love and need for balance and the symbolism as captured most
respectfully in this piece for the blessed Trinity.
It is not complete.
This whole “retirement” issue threw me for a bit of a loop and the groove of my diligent
quest has been slightly sidetracked.
There is a monastery in Hulbert, Oklahoma, Our Lady of Clear Creek Abbey that I wish to
eventually donate the piece to—
they are a group of Benedictine monks,
originating out of Notre-Dame de Fontgombault,
a French Abbey, which belongs to the Solesmes Congregation.
I will write a later post about St. Benedict and the Rule of Benedict—–
a wonderful standard in which to conduct ones life.
I will also showcase the monks of Clear Creek Abbey.
http://clearcreekmonks.org/

I thought that during Holy Week,
it would be fitting that I share my love of God’s idea of symmetry
(Trinity/ Triptych/tri/three) with you, my viewing friends.

3 comments on “My secret German love”

Leave a Reply to Julie (aka Cookie) Cancel reply