White is not a mere absence of color; it is a shining and affirmative thing, as fierce as red, as definite as black. God paints in many colors; but He never paints so gorgeously, I had almost said so gaudily, as when He paints in white. G. K. Chesterton 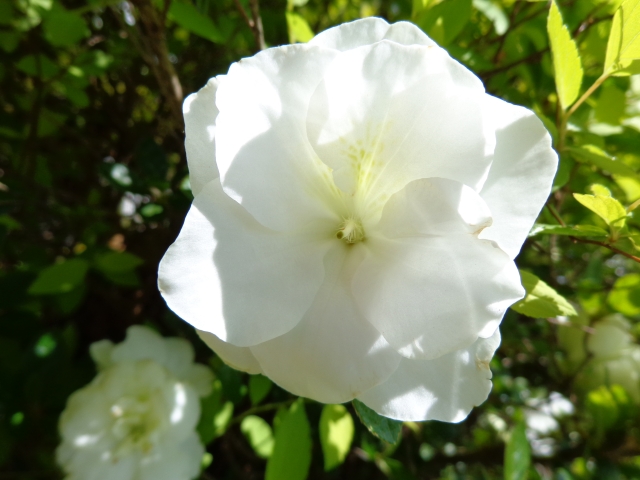 I love having plants/ bushes that have white blooms in the yard. I don’t know if it’s because they are neat and clean when viewed, elegant and noble, or tend to make the biggest statement—“here I am, I may be merely white but I am the excess of all light!”—As an art teacher I would always explain to my kids that black, white and grey were not colors but actually conditions of light. Black would be the absence of light, grey a tone and white would be the excess of all light.

Discussing color theory is a course unto itself and tied very closely to science–physics, chemistry, you name it. It can be complicated, and I think, quite interesting, but I always needed to keep it neat and simple as my kids were more interested in painting rather than about understanding how the colors they chose worked .

One day we’ll talk about color, you and I, as I dearly love the history of color and paint–how certain colors were made–blue being a most expensive color for artists such as Michelangelo as it was made from grinding the semi precious stones, Lapis Lazuli to a paste and adding a binder. Many colors were made from insects, bones, and unfortunately lead. Those who ran the early local paint shops were often in mortal danger from the inhaling of fumes, the handling and mixing of molten metals, and dangerous chemical reactions. It was not a profession of longevity.

Today we may simply appreciate the pretty white blooms we see in the garden, those images that we so eagerly capture with a photograph. I, myself, enjoy allowing my imagination to wander back in time to those who once tried capturing the same sort of image, who had no cameras– and as to how those artists, who throughout time, did so with at a bit of a risk, but none so great as to those who made the paint……. we’ve come a long way…