“Almost every country tavern has a martin box on the upper part of its sign-board; and I have observed that the handsomer the box, the better does the inn generally prove to be.”
John James Audubon (1831)

The Purple Martin is the largest swallow in North America, and in the eastern United States it is almost completely dependent on human-made birdhouses for nest sites.
taken form Tennessee’s Watchable Wildlife

(no, that is not a martin but rather a disgruntled bluebird / Julie Cook / 2014) 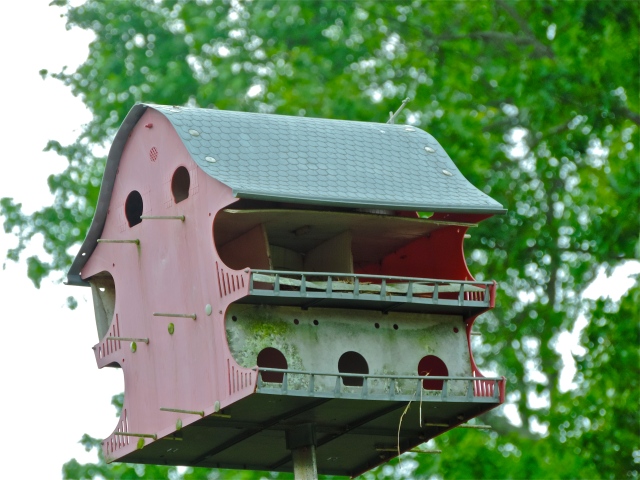 I’ll be the first to admit, the martin house out back, the one on that telescopic pole, has seen better days. Even the Bluebird seems a bit perturbed. The house has been up now for almost 15 years. It has weathered snow, ice, tornados, hail, lightening. . .you name it, if Mother Nature dished it out, the house has withstood it–from torrent and drought, year after year. It has even seen its fare share of usurpers—the occasional squatter who has decided to stake a claim of residence—much to the martin’s chagrin.

I decided it was high time I find a replacement.
I went online and found what looked to be our exact house.
I could order a $44 kit. I wouldn’t need to order a new pole as I’m hoping the old one will still make do.
Imagine my joy as the mailman delivered a rather large box this afternoon.
I unpacked the box, pulling out my kit.

Oooo made in the USA–even better.
The instructions claim a quick and painless assembly—however the instruction sheet is as large as a newspaper section which opens up to a full page spread times 4. What’s so hard about snapping together a plastic bird house?
Hummmmmm

I began snapping, popping and poking pieces first a part, then together.
OK, I think I’ve now got the hang of this!
Piece of cake. 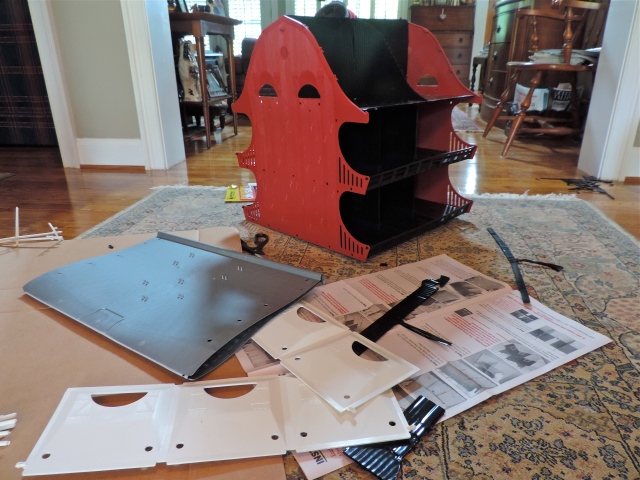 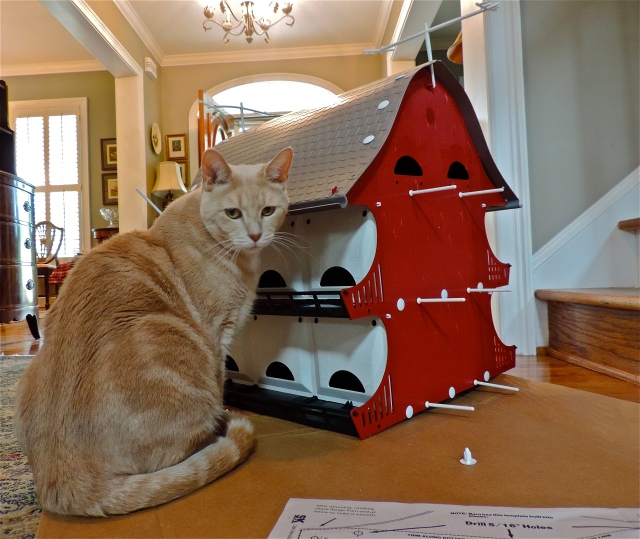 Percy does not exactly help the cause by chewing on the perches.
Not to mention that I have to quickly gather up the small punched out parts as he reminds me more of a puppy wanting to chew on everything.

Now as soon as it quits raining, I’ll remove the old house, replacing it with this sleek new abode. This will be the envy of every Martin family within miles!
Martins are the best bug catchers available besides bats. And whereas I don’t have up any bat boxes, the martin house will have to do.
I’ll keep you posted. . .