The Sages prophesied that even after the Temple’s destruction, the Divine Presence would never leave the Western Wall, and that the Wall will never be destroyed. The Wall is endowed with everlasting sanctity, as the Talmud says: “And I will make your sanctuaries desolate” (Leviticus 26:31) – this means that the sanctuaries retain their sanctity even when they are desolate.
excerpt taken from aish.com ‘Six Reasons why the Wall is Holy’

“Dispersed as the Jews are, they still form one nation, foreign to the land they live in.”
Thomas Jefferson

“It is obvious that the war which Hitler and his accomplices waged was a war not only against Jewish men, women, and children, but also against Jewish religion, Jewish culture, Jewish tradition, therefore Jewish memory.”
― Elie Wiesel, Night 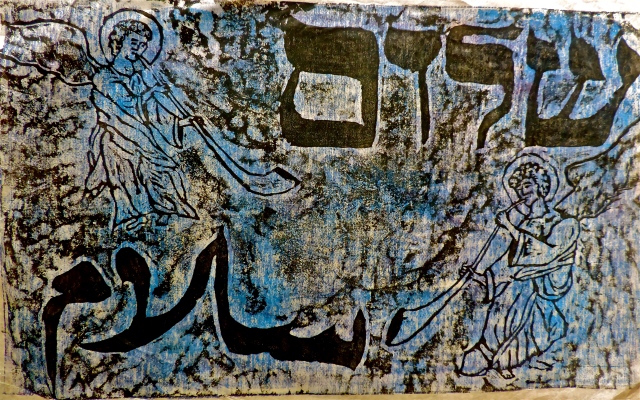 Most people might list wanting to climb some famous mountain, or running in a grueling marathon or competing in an arduous triathlon. Others may yearn to travel to foreign lands seeing such things as the Pyramids, the Taj Mahal or diving in the ocean to see the Great Barrier Reef. Some may wish to meet famous and influential people, witness a monumental sporting event or attempt some death defying feat. . .no matter what, where or who. . .there is no doubt, for all of us, some sort of check list stored in the recesses of our minds.

Most of the items on the list remain just that, an item on an unseen and non-tangible sheet of paper perched in ones inner being–wistful thoughts of fancy that come and go as quickly as one cares to daydream.

Most of my thoughts are not the typical items on a do or die list, as I’ve never been very typical. I have always wanted to travel to the southern end of the Sinai Peninsula, traveling to the ancient monastery of St Catherine’s, in order to view the world’s oldest Icons. Within the collection at this monastery, which is almost as old as the Christian religion, are some of the earliest known “painted” images (or as the Orthodox explain, “written” images) of Jesus.

Sadly given the tensions and unrest in Egypt, travel to the Sinai is highly discouraged for Americans, particularly Christian and Jewish Americans.

I’d also like to learn Hebrew, Greek and Aramaic as these ancient languages are lynch pins to clearly understanding the inception of and growth of Christianity. Yet, sadly, learning languages does not come easy to this brain of mine.

Now why would a nice southern girl, who was raised under the hand of the Church of England as my father use to liken the Episcopal church to, want to travel to a tumultuous area of the world in order to see a crumbling holy Jewish site? Wishing, no doubt, to shove some little folded piece of paper into one of the myriad of nooks along the ancient Temple wall.

It should be noted that to have faith and to believe in something that is not tangible is never easy.
To have faith and to believe in an unseen God and of His unseen Son and of His unseen Spirit, is not for the faint of heart. Such faith often yields to the gnashing of teeth and in deed to true wailing. So often we want so desperately to have some sort of sign or acknowledgement that the things we claim, proclaim and praise are rock solid REAL.

We all have pieces of the doubting apostle Thomas running about in our minds and hearts:
But Thomas, one of the twelve, called Didymus, was not with them when Jesus came. So the other disciples were saying to him, “We have seen the Lord!” But he said to them, “Unless I see in His hands the imprint of the nails, and put my finger into the place of the nails, and put my hand into His side, I will not believe.”
After eight days His disciples were again inside, and Thomas with them. Jesus came, the doors having been shut, and stood in their midst and said, “Peace be with you.” Then He said to Thomas, “Reach here with your finger, and see My hands; and reach here your hand and put it into My side; and do not be unbelieving, but believing.” Thomas answered and said to Him, “My Lord and my God!” Jesus said to him, “Because you have seen Me, have you believed? Blessed are they who did not see, and yet believed.”

So yes, I confess, I have a yearning to reach out in order to hold and be held. Who hasn’t ever imagined the God of Abraham, Isaac and Jacob reaching out for us, to envelope us in His arms. Who has never imagined themselves as that woman who, in the crowd, reached out to touch merely the hem of Jesus’ tunic–falling at His feet and clinging to his legs as a lost child!?

How many people in the midst of anguish and tearful prayers have not wanted to see the Lord their God running down the walkway in order to take them in His arms, soothing and comforting the pain, suffering and sorrow?

Somehow I feel as if standing before the Wall, stretching my arms out as possibly wide as I could, while leaning my forehead against the rough stone would be a kin to hugging God. As the Wall is considered to be Holy–as in Holy that within the walls of the Temple once rested the Holy of Holies. Other than the burning bush, other than the tomb, other than Golgotha, how more tangible is there on this earth?

Which brings me to my last posed question or thought—that being the question of the Jews.
Christianity has wrestled with this question since the day of the Crucifixion.
There has been a love hate relationship between God’s chosen people and the followers of Christ for over 2000 years.
So much alike and yet so very different.
We have blamed one another and yet defended one another.
One is the child by Divine Proclamation—while the other one is the child by adopted Grace

I for one have never had a difficult time sorting out our relationship—that between Jew and Christian.
I do not feel as if I am better than, wiser than, holier than my Jewish brethren because I made the conscious decision of following Jesus. To believe in His divinity as God’s Son–the resurrected Messiah, has made me an adopted Child by Grace.
I am not Jewish yet my Savior lived for 33 years as a very devout Jew. I have a deep respect for that very fact and for Jews to this day.

I do not blame the Jews, as unfortunately many Christians have throughout the history of Christianity, for the death of Christ. We, humankind, Jew and non Jew, all had a hand at that fateful day—just as we still do on a continuing day in and day out basis of sin. And yet, it is to the very death and Resurrection that we, humankind, are offered true life.

The life the followers of Christ are promised is not of this world—as this world, with its sorrow, difficulties, anguish, pain, suffering, unfairness, injustice, so forth and so on, is not our true home. All of us, Jew and non Jew, are freely offered this life, yet it comes down to merely a matter of choice.
To follow, or not to follow.

The price of following is our very life–as we must surrender the life of self, picking up our cross and following the Commandants of the Almighty God and the teachings of His Son.
The offer remains open to all humankind.
Those who choose to follow are no better than any of the others to whom this “gift” is offered, they are saved but no better than–as we all fall short.

I will leave you today with the wisdom of Dietrich Bonhoeffer. The young German Lutheran pastor and theologian who was murdered by hanging on direct order of Adolf Hitler at Flossenbürg Concentration Camp April 9, 1945:

The Open Question Of Christ
God’s yes and God’s no to history, as they are known in the incarnation and crucifixion of Jesus Christ, bring into every historical moment an eternal, unrelenting tension. History does not become the transitory bearer of eternal values. It is instead through the life and death of Jesus Christ that history first becomes temporal. It is precisely in its temporality that history is affirmed by God. The quest for a historical heritage is thus not the timeless quest for the eternally valid values of the past. Rather human beings placed in history are themselves accountable here for the present, as it is accepted by God in Christ. . . .The Historical Jesus is the continuity of our history. But because Jesus Christ was the promised messiah of the Israelite-Jewish people, the line of our ancestors goes back beyond the appearance of Jesus Christ and into the people of Israel. Western history is, in accordance with God’s will, indissolubly bound to the people of Israel, not only genetically but in genuine, constant encounter. The Jew Keeps the Christ question open. . . .An expulsion of the Jews from the West must bring with it the expulsion of Christ, for Jesus Christ was a Jew.
Taken form the writings of Dietrich Bonhoeffer: Barcelona, Berlin, Amerika 1928-1927