“American cities are like badger holes, ringed with trash–all of them–surrounded by piles of wrecked and rusting automobiles, and almost smothered in rubbish. Everything we use comes in boxes, cartons, bins, the so-called packaging we love so much. The mountain of things we throw away are much greater than the things we use.”
― John Steinbeck, Travels with Charley: In Search of America

“One man’s trash is another man’s treasure”
Unknown

” A person does not hear sound only through the ears; he hears sound through every pore of his body. It permeates the entire being, and according to its particular influence either slows or quickens the rhythm of the blood circulation; it either wakens or soothes the nervous system. It arouses a person to greater passions or it calms him by bringing him peace. According to the sound and its influence a certain effect is produced. Sound becomes visible in the form of radiance. This shows that the same energy which goes into the form of sound before being visible is absorbed by the physical body. In that way the physical body recuperates and becomes charged with new magnetism.”
Hazrat Inayat Khan, Mysticism of Sound

As a veteran high school art teacher, I was constantly familiar with the ebb and flow of budgets.
In the lean years of the Economy–be it local, state, National, or all of the above–Educational systems would attempt their hand at creativity when it came to maintaining and offering a quality curriculum.

With losses in revenue, be they local, state or federal, activities and courses which were considered “non essential” to the learning process were always up for discussion as the yearly conversations would drift toward funding and budgets. Those programs being the initial proverbial lambs led to the slaughter of the chopping blocks were most often the Arts, Foreign Language, as well as Health and Physical Education.

One thing I always told my kids was that it has been and always will be the Arts— be it music, performance or visual, which have always given man his humanness—hence these being considered “The Humanities of Academia.

It is the Arts which makes us, man, civilized.

I could go on all day espousing the benefits of keeping the Arts in our schools. I could jump on my orator’s soap box, speaking to man’s responsibility when it comes to the Arts, as in understanding that there are parameters to creativity which are to be explored as well as respected—but I will allow a recent story as seen on 60 Minutes to speak for me and of the innate and essential relationship man has to the need for creativity–in this case, the making of music.

Sunday evening, the televised news “magazine” broadcast a story that had originally aired earlier in the television year. A story that I had originally missed.
It was the story of unspeakable poverty.
The wastefulness of man.
The creativity of Man.
As well as a story of the healing power found in both the creative process as well as in the making of music.
Hope in a sea of hopelessness.

Once again it was the correspondent Bob Simon who shared the story of Paraguay’s unimaginable poverty and of the hope which rises up from the massive trash heaps–hope for the children who call Cateura, Paraguay home.

The story opens with shots of the acres and miles of trash which this small South American town has unimaginably grown up around. A city which emerged literally from the trash. Cateura is not far from the capital city of Asuncion and is the dumping ground for much of Paraguay.

As the camera panned the landscape, there was nothing but trash for as far as the eye could see. The buzzing sound of a legion of flies, off set by the sound of hundreds of birds, all looking to capitalize on some morsel from this sea of waste, was nerve racking.

And then I, the viewer, notice them—there amongst the mountains of garbage were hundreds of people, young and old, who were rooting throughout the trash, as say a pig might root through garbage, in search of anything salvageable to resell—be it plastic, glass, rubber, metal—anything that could be resold.

It is almost incomprehensible that people live in Cateura.

And then the camera takes the viewer to a school with the unmistakable sound of orchestral music, albeit a bit out of tune, rising up from the dirty open courtyard. Suddenly we realize that the musical instruments the children are playing are not typical of what one would find in a school’s collection of instrument. These instruments give new meaning to the concept of “homemade”.

These unlikely instruments were born from the creative thought of an environmental technician, Favio Chavez, who having come to Cateura, was amazed observing that the children of Cateura not only lived amongst the sea of trash, but they played here as well, just as other children world wide would play.

Next, meet Don Colá Gomez. Señor Gomez is a carpenter as well as a “trash digger” –but Señor Gomez digs not only for items of resale value, but he digs for something much more valuable. He digs and scavenges for items he can transform into musical instruments.

I was amazed watching Señor Gomez cutting and shaping scrapes of metal and plastics, fashioning them into violins, guitars, cellos, clarinets, flutes, drums, etc. The tuning pins could be a broken wooden rod, a dirty and discarded hair brush. The strings stripped from pieces of plastics. Drums from x-ray plates, clarinets from old rusted pipes. A factory made violin would cost more than the average home in Cateura. Ingenuity truly having to be the mother of invention in Señor Gomez’s workshop.

The children gather in the dirty school yard each Saturday to learn to play an instrument. The older children, those who have already been playing for a while, teach the younger children. Favio Chavez explains to the reporter that “music teaches the kids respect and responsibility, not common commodities in the gang-ridden streets of Cateura.”

I imagine that the music making of which Señor Chaves explains is something much greater than that of teaching children various attributes of character but rather that the music and the orchestra is a life line for these children—connecting them to the very core of human dignity.

Señor Chavez is actually taking the children of Caturea’s orchestra on tour. There is even a documentary being put together about this ragtag orchestra “Landfill Harmonic” complete with a rather viral trailer available on YouTube.

I will leave you with the words of Mirian Rios, one of the children’s grandmother. . . “I would say it’s a blessing from God. People used to humiliate us and call us “trash pickers.” Today they are more civilized, they call us the “recyclers.” So I feel that this is a reward from God. That our children who come from this place….can play beautiful music in this way

May we all learn to play such beautiful music 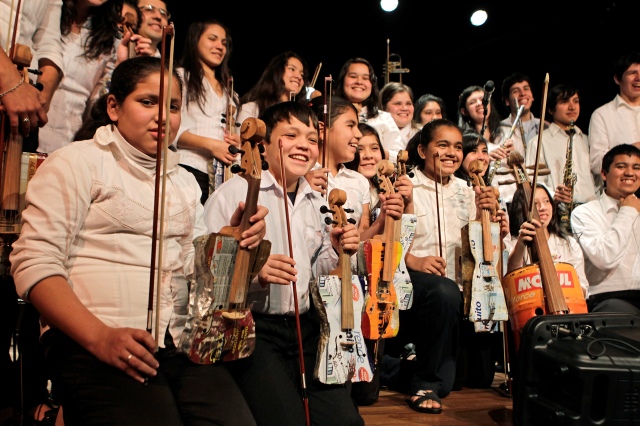