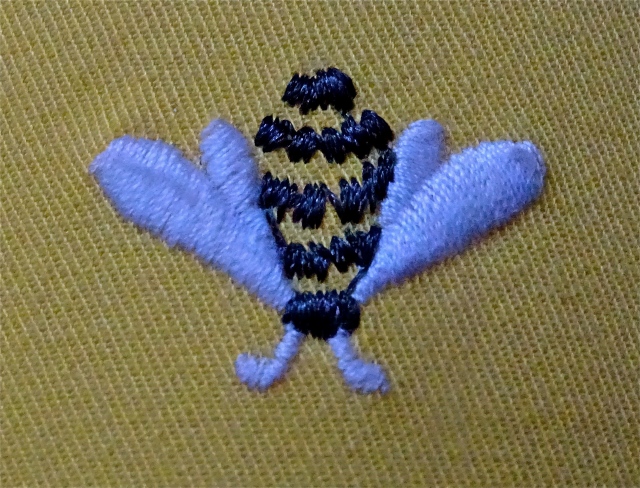 Looking in the closet, deciding what to wear, I opt for the yellow pants with the embroidered bees.
In honor of Dad.
You should know Georgia Tech’s mascot is a yellow jacket.
Yellow Jacket. . .Bee. . .
Comme ci, Comme ça

Every state has its own hyped up in-state college rivalry.
You know, those colleges within each state which vie for bragging rights from one another–with such being anything from the highest recruited freshman class to the nicest campus, the best football team, the best basketball team, the best gymnastics team, the best debate team, the top research facility. . .yada, yada, yada. . .as the list goes on and on.

Here in the South we simply call it “good old fashioned hate”
Someone wrote a book about such using that very title so I’m assuming that’s what we call it.
Here in Georgia that love / hate relationship exists between The University of Georgia and The Georgia Institute of Technology, better known as Georgia Tech, or simply Tech.

I come from a long line of Georgia Tech graduates. . .
My brother, my dad, my uncle, my grandfather, my cousins, even my son took a few course at Tech.
I on the other hand earned my degree from The University of Georgia, otherwise known as Georgia or simply UGA.

People often ask about my family’s rivalry but it’s never a problem. . . not until each fateful fall Saturday in late November when The Georgia Tech Yellow Jackets meet The University of Georgia Bulldogs on the gridiron—-then there’s a problem. My Uncle would get so upset, he couldn’t bear to watch the game or even listen to it on the radio—simply too stressful.

My deep sense of rivalry satisfaction however, comes in knowing that a man who graduated from both Emory University and Georgia Tech, who claims allegiance to a yellow jacket nation, actually had to endure paying for his daughter to attend college at his much hated arch nemesis.
Enough said.

As I sat in the waiting room, the nurse stepped out to change the channel of music.
U2 was currently singing yet she told me that they needed to change the tempo as Bono was just a little too lively for my dad. I know Dad didn’t complain, probably wasn’t even paying attention, but I let her change it nonetheless.
Eva Cassidy began singing a somber and melodic Fields of Gold.
“This is to make me feel better?!” I mused to myself.
The nurse immediately noted my “bee” pants saying how cute they were.
I explained I wear them for dad.
We then chat about that whole Georgia / Georgia Tech thing. . .

Looking over at Dad, I notice that he just looks so, well. . .old.
Small and tiny, shrinking.
His clothes seem to swallow him these days.
His hair, what hair remains, sits most days a bit disheveled on his mostly bald head.
His glasses, too big for his now tiny face, are always dusty, clouding his rummy eyes.
He’s pale and frail.
Usually listing to the right as he walks. . .make that, shuffles.
We made small talk. . .or actually I attempted to make small talk as Dad rarely initiates conversation.
I asked a few short questions in order to fill the quiet of the waiting room, albeit for Bono’s singing.
“I don’t know” was Dad’s reply, “you know my short term memory isn’t good.”
“I just looked at him, feeling sad, as he began staring forward with his chin dropped in his hand as his arm was propped up on his knee.
As they call him back to see the doctor, telling me they’ll come for me when he’s finished, I lose myself in my thoughts as the song Mad World begins to play. . .
All around me are familiar faces
Worn out places,
worn out faces. . .

Not making me feel better at all. . .

The nurse finally calls me back.
I walk in as Dad is sitting in a chair looking rather small.
I take a seat by him on the doctor’s stool.
“Oh you’re wearing bee pants. . .”
“Yes Dad, just for you” I proudly smile.
He beams a smile of satisfaction.
He becomes fretful about a new prescription the doctor had told him about but I reassure him that we’ll find out more when the doctor comes back in to go over the lab results.

Dad’s hemoglobin is low. It’s been low.
Meaning he’s anemic.
There are symptoms and signs. . .
Dad is most likely bleeding internally, most likely intestinal.
Last visit they shot him full of Vitamin B-12.
Added lots of D and changed up some of the prescriptions.
He seems much better than last visit.
Not as pale, not as wobbly, not as poorly.
At 87 with one so frail, a colonoscopy is asking a lot.
As the doctor had explained to me on our last visit. . .”say he has a colonoscopy and say they find cancer—what do you do?” The odds wouldn’t be in Dad’s favor with surgery. And what of treatment? What of chemo or something even more aggressive. . .would he, could he survive?
We all agreed, with Dad leading the charge, we will wait and see. . .monitor.
Sounds good. . .

It’s a quick ride home as he is only a Point A to Point B sort of individual. .
no diversions whatsoever!!
He tells me multiple times that he’s worried about Gloria as she’s constantly hurting and frustrated that her hands aren’t as apt to do what she wants them to do. I tell him that I hope the doctor can prescribe something for the arthritis.
He smacks his lips.
In fact the entire time we’ve been in the car, he’s licking his lips or rather moving his tongue over the top of his mouth. . . you know, the way you do when your mouth is dry and you’re trying to work up enough saliva to make it unsticky. . .but the sound is one that is enough to drive a person crazy.
I realize that his mouth is most likely dry from all of his prescription and I make a mental note to say something to the doctor on our next trip back in a couple of weeks.

There was a time I’d have gone nuts over the endless smacking sound and of the constant litany of the same worried question after worried question. My patience with Dad has not always been great.
He tends to be very obsessive compulsive. Especially in regard to my brother. I won’t go into that whole story—suffice it knowing that he committed suicide years ago and dad has a very unhealthy conscious decision in choosing not to heal.
He is a dog with a bone, refusing to let go. . .
For years he refused counseling, always preferring to wallow.
I had a hard time with Dad and all of that.

Yet thankfully time and age have a funny way of sorting things out.
Dad, unbeknownst to himself, is continually teaching me about the important things in life . . .with the kicker being that I’m finally open and appreciative to such.
Funny how that works.
And the most amazing thing of it all. . .
is that a diehard yellow jacket hating Bulldog can proudly wear a pair of yellow bee pants. . .
just for Dad. . .
Good old fashioned hate steeped in love. . .

8 comments on “Good old fashioned hate, with an extra dose of love”