“So it is more useful to watch a man in times of peril,
and in adversity to discern what kind of man he is;
for then at last words of truth are drawn from the depths of his heart,
and the mask is torn off, reality remains.”
― Titus Lucretius Carus 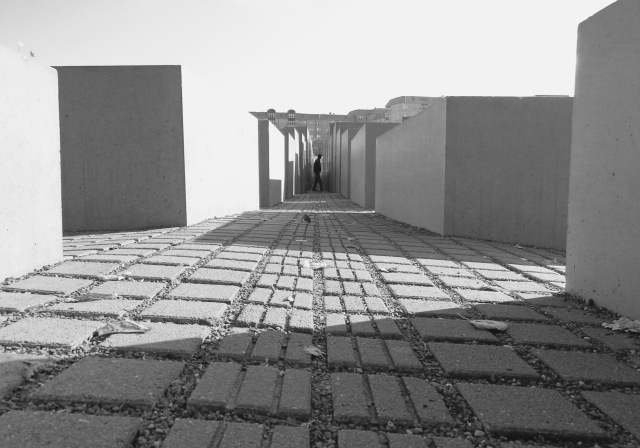 (a small section of the Holocaust Memorial in Berlin, Germany / Julie Cook / 2012)

We don’t much care for peril or that which is perilous.

Yet our world, our society, our civilization is consumed by peril.
Yet we prefer not to think about this.

We prefer to be distracted.
Distracted by that which is…
bright and colorful,
soft and sweet,
happy and nice…
and for some even dull and dark…
anything to take our minds off of all that is now in peril.

Because who wants to sit around pondering peril and perilous…
when one can look at a shiny baubles, happy videos about kittens and puppies
or lose oneself to reality TV—nothing better than watching the lives of random folks
on television fall apart, or lose massive amounts of weight or dance their socks off….

You get the picture…

With so much peril all around us, it’s no wonder the hits and likes of
the puppy’s and kitten’s videos are skyrocketing.

I like to read but sadly time is not always my friend allowing me to do so.
I have a book that I purchased a while back but have made a point recently to grab it
when running out the door to rush dad to this or that procedure and doctor.

I have been troubled over recent current events in this country where folks, mostly younger folks, have taken to labeling various political minded individuals as Hitler.
No one in this country comes anywhere close to possessing any sort of similarities to Adolf Hitler.
It is flippant but even more egregious to label anyone as Hitler.
It insults the 6 million individuals who were murdered in his concentration camps–not counting the countless numbers of soldiers and civilians killed during the course of the war…it cheapens and lessens each one of their tragedies.

But most folks today don’t really understand the total enormity of what Hitler’s ideology, atrocities to mankind, and reign of terror did not only to the people of the greater world almost 80 years ago, but what his deluded visions continue to do to us today…

For most of us today this is all merely fodder for the history books…
a bad blip on the radar of the past.

Maybe our generation who has been taxed, as has been the generations before us, with reminding current as well as future generations of the enormity of all that was in those dark days of World War II are not doing our job.
Maybe reminding others of past perils and of the similarities to today’s perils is simply too much, too challenging—- so therefore ignoring it has become the better option….

Opening the backdoors to incoming troubles.

Words uttered in 1940, the words of Helmuth von Moltke, a German lawyer involved in the resistance, ring as true today as they did all those many years ago…
“totalitarian war destroys spiritual values. One feels that everywhere. If it destroyed material values, the people, whose thinking is mostly limited by their perceptions, would know how and against what to defend themselves. As it is, the inner destruction has no correlative in the perceived world of things, of matter. So they fail to grasp the process and the possible means of countering or or renewing themselves.”

Our spiritual lives are currently in peril…shall our means of countering such be also lost, in turn allowing for a new sinisterness to fill the vacuum?
Extremism and radicalization loves to fill in where the spirituality of mankind has faded…

Those brave men and woman who worked silently and secretly to oppose Hitler and the Nazi regime, those who risked everything in order to stop, who even attempted to assassinate the ensuing madness, had to consider not only removing Hitler but what to do in the void following his removal.
That is, should they have succeeded in that removal.

As they were keenly aware of what could fill the vacuum should Hitler be disposed or eliminated.
For chaos often begets chaos….

Father Ludwig Kaas, an exiled German priest turned abettor for the resistance, noted that “the elimination of the furor Germanicus of Hitlerism will leave particularly among the young and restless generation a spiritual vacuum which will have somehow to be filled if another explosion is to be avoided”
As an alternative order-principle, the Vatican proposed European unification. An economic federation, Kass argue, would prevent anarchy, exacerbated patriotism, aggression and war
(Church of Spies p94)

The similarities of then and today are eerily mirrored.

Rather than Hitlerism, Nazism, the Nationalist Socialist Worker’s Party of then, today it is ISIS, the Islamic State, and an extremist Islamic Caliphate. Many of the young men and even woman who leave families in order to go join this barbaric rising regime are most often the restless of their generation.
They are those who are lost, bored, disenfranchised, angry, even oddly hopeful…

Many of the young terrorists who were responsible for the attacks in Paris and later those in Belgium had been no stranger to the local authorities as they had been versed in petty crime, local drug dealing, unemployed, foreign nationals..lost, living on the fringe of a country not their own.
There have been a few however who had been educated, integrated and accepted, yet felt a calling back to something buried deep within their core…

Have we forgotten that there are further generations worth fighting for?

Maybe we need to think about, taking a closer look at this perilous world of ours, and consider what we need to do in order to make things less perilous…..for not only ourselves but for our future hope…

He has delivered us from such a deadly peril, and he will deliver us again. On him we have set our hope that he will continue to deliver us, 11 as you help us by your prayers. Then many will give thanks on our behalf for the gracious favor granted us in answer to the prayers of many.
2 Corinthians 1:10-11