O, Star of wonder, star of night
Star of royal beauty bright
Westward leading, still proceeding,
Guide us to thy perfect light.
Lyrics from the Christmas Carol
“We Three Kings of Orient Are…” 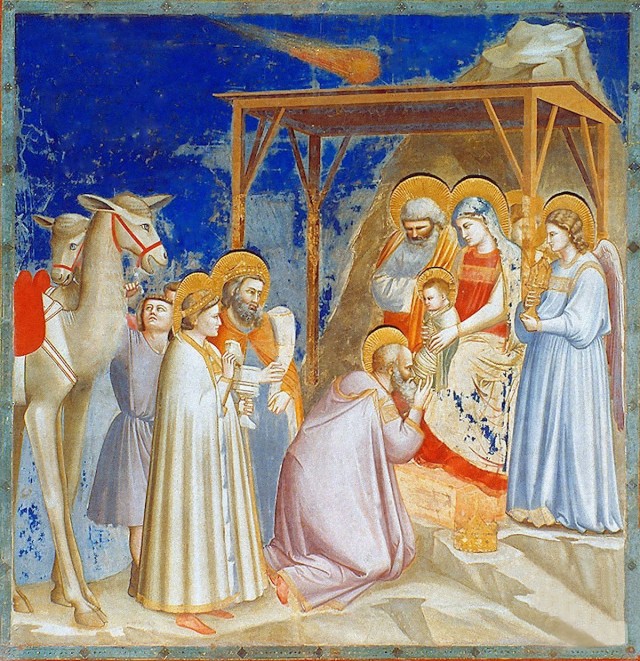 (image of the Adoration of the Magi by Giotto / Cappella Scrovegni / Padova. Pad ova, Italy / 1305)

“Not everyone sees the star”

Observes Christoph Blumhardt in his Advent reflection The Wisemen’s Star.

If everyone had seen the star,
would not all of ancient Palestine been turned upside down from such
an extraordinary sighting of a brilliant light illuminating the eastern sky?

Has not history shown us that the sighting, and subsequent gathering,
was not intended as a major crowd massing phenomenon…

but rather a more intimate affair…

Gathered were a host of angels, a handful of shepherds, three wisemen,
along with a sundry menagerie.

But rather a quiet tender affair…
Intimate,
private,
personal…
and closely gathered.

The birth of a child…

Yet not just any child…

Blumhardt surmises that “it is necessary to have an upright, sincere heart.
Whoever is not filled with longing but is only inspired by egoism,
only interested in his own salvation, with no feeling for sighing creation—
he will not see a star even when it is there; he does not see the glory of the Lord.

So we must ask ourselves….
as we enter this new season of waiting….

Will we see the star?

Are we filled with desire and longing?

Is our heart sincere?

For if that is indeed so, that our hearts are indeed ready…both longing and looking…
we must remember not to be late,
for we have been invited to an amazingly intimate affair.

After hearing the king, they went their way; and the star, which they had seen in the east, went on before them until it came and stood over the place where the Child was. When they saw the star, they rejoiced exceedingly with great joy.
Matthew 2:9-10