“Yesterday, December 7th, 1941 — a date which will live in infamy —
the United States of America was suddenly and deliberately attacked by naval and air forces
of the Empire of Japan.

The United States was at peace with that nation and,
at the solicitation of Japan, was still in conversation with its government
and its emperor looking toward the maintenance of peace in the Pacific….”

(image of the USS Arizona after it was bombed)

75 years later…we still carry a heaviness on this December day.

During the course of World War II, there were many atrocities, unspeakable brutalities
and a loss of life that is nearly impossible to wrap one’s head around.

For whatever reason, I do not feel as if this generation grasps the full significance of the
tremendous impact WWII has played in the history of mankind…
nor do I feel that they particularly seem to care.

The loss of life was staggering.
It is estimated that 80 million people lost their lives during the course of the war,
between 3% and 4% of the world’s population at the time…

Add to that those lives of the many more who were dramatically wounded or whose
family’s survived loss and destruction…those who were affected and are considered to be secondary casualties…
Those such numbers are simply left to our fading memories.

The USS Arizona, one of the 8 battleships bombed that fateful December day,
lies as a silent haunting specter on the floor of Pearl Harbor
as she is the lasting tomb of 1,548 servicemen…those whose bodies were never recovered.
A visual tomb which rests just below the surface of the sea.

But my thoughts however today are not merely with those individuals who lost their
lives that fateful December day 75 years ago, but rather my thoughts
gravitate to the collective family of all Servicemen and woman
who have continued putting themselves in harm’s way for those of us who
simply go about living our lives, day to day, as if nothing has ever been different.

I think of a young entitled football player who opts out of sharing in his country’s
national anthem prior to his taking the field of play…
to participate in a game in which he earns millions of dollars.
A game he can play in safety because there are Service men and woman
making certain that he is free to opt out of his country’s national
anthem and to simply play a game.

Lives put on the line every day, as well as countless lives lost,
all for a young man to be able to
make millions of dollars while playing a footbal game…

The balance of those two thoughts will never equal one another.

And it was just yesterday that I finally sent an item home
to it’s rightful serviceman’s family…
45 years after the fact.

A single stainless steel bracelet worn by a young Georgia elementary school girl…
worn as a reminder and a tiny link to a man who was living, and had lived,
for 7 years in captivity, held by the North Vietnamese in a land that
seemed to be lifetime away.

Three years ago, as a Fourth of July tribute, I wrote a post about the POW bracelet that
I wore so very long ago.

It is a post that I still occasionally receive comments on to this day…
by those individuals who also wore Lt. Col. James Young’s POW bracelet

Lt.Col Young was taken prisoner in 1966.
At the time his daughter Denise was just an infant.
For almost 8 years her father was simply a name and a face in family photographs…
because she had no recollection of the man who was currently in a prison camp
thousands of miles away in a remote Asian country.

Not until 1973, when most of our prisoners were released with the signing of the
agreement to end the war, would Denise be formally introduced to her father.

Denise met her dad for the very first time when she was 8.
Eight birthdays and eight Christmases came and went before Denise was to meet her dad.
A man who was not the same man who left his infant daughter in the arms of his wife
as he went to fight a strange war on a foreign land.

Those of you who know me know that I do not participate in social media.
It has always been my thought that if God wanted someone to see or read my blog,
He would bring that person my way….

He did just that this past summer.

Out of the blue in June, on Father’s day actually, I received a comment on the post
I’d written about Lt Col. James Young…
the comment however was not by someone, who like me had worn his bracelet during those dark days of the war, but rather the comment came from his youngest daughter, Denise.

There was even a comment that I had made to others who had reached out to me
about wearing the bracelet that I had hoped that one day one of his daughters
would see the post and then I could actually send them the bracelet.

And on Father’s day of 2016, almost 45 years after the day I took off that bracelet,
a now grown daughter received word that piece of her dad,
who had passed away years earlier,
was still very much in the minds and hearts of many other individuals across this nation.

As life has a way of getting in the way, it wasn’t until this past weekend that I finally
retrieved the bracelet out of the safety deposit box,
packed it up and sent it across the country to an anxious daughter. 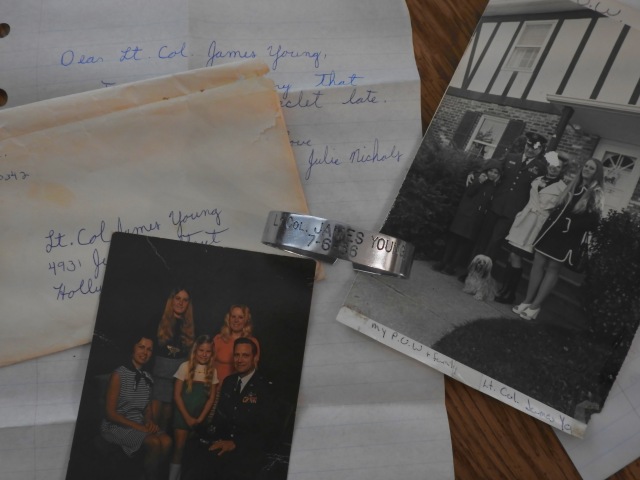 I could never give back to Denise those nearly 8 years she lived without her dad.
Nor could I have offered her help during those unimaginable days of adjustment that a
family endured at the return of a long lost member…
a time of reacquaintance and simply getting to know one another again…
or in the case of Denise, getting to know for the first time…

Nobody can give any of that back to a family of a Service member.

And so I thank Denise, her family, and her father, Lt Col. James Young,
for the sacrifices they made for not only this Nation as a whole,
but to me and all the other individuals out there who make this county who and what she is…
even to those young entitled individuals who simply don’t get this whole mindset of sacrifice….

Love each other as I have loved you.
Greater love has no one than this: to lay down one’s life for one’s friends.
John 15:12-13