Food for the body is not enough.
There must be food for the soul.
Dorothy Day

At first you think you are merely looking into a flower.
A bloom from a rose of sharon plant.
But upon further inspection, there happens to be a bumble bee deep inside, covered in sticky pollen. 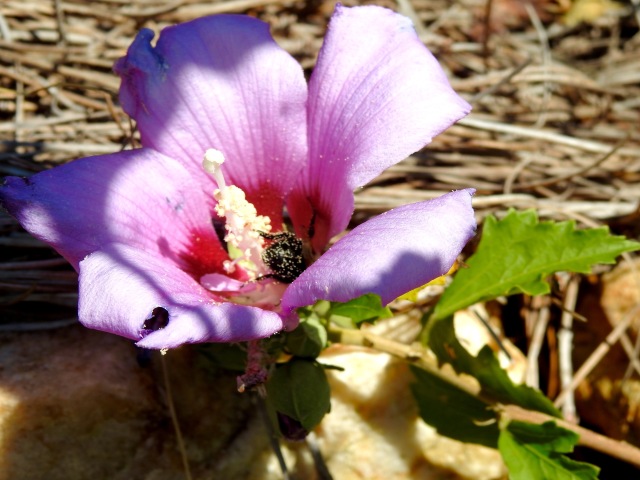 And not only was there one pollen covered bumble bee, there were several…

It was as if the bees simply couldn’t get enough.
They were gorging on nectar while becoming completely covered in sticky pollen.
So much so that many of the bees had become lethargic.
So overtly satiated, that they were almost catatonic…
and yet they kept on with their quest of consumption…

Happily miserable with themselves.

And who among us has not gone after something equally tantalizing with a
similar gusto and vigor?
Gobbling up our fill until we can barely move, able to go no further…
as we are full, engorged and yet unable to push back, calling it quits…
Pressing on until we actually make ourselves sick…

Yet what if we sought God with a similar desire?
With an unabashed hunger…
seeking to fill the bottomless void of our hearts?
As we eventually bask, being happily full and
deeply satiated, in all that is of Him….

But if we have food and clothing, we will be content with that.
Those who want to get rich fall into temptation and a trap and
into many foolish and harmful desires that plunge people into
ruin and destruction.
For the love of money is a root of all kinds of evil.
Some people, eager for money,
have wandered from the faith and pierced themselves with many griefs.

But you, man of God,
flee from all this, and pursue righteousness, godliness, faith, love,
endurance and gentleness.
Fight the good fight of the faith.
Take hold of the eternal life to which you were called when you made
your good confession in the presence of many witnesses.
In the sight of God, who gives life to everything, and of Christ Jesus,
who while testifying before Pontius Pilate made the good confession,
I charge you to keep this command without spot or blame until the
appearing of our Lord Jesus Christ,
which God will bring about in his own time—God,
the blessed and only Ruler, the King of kings and Lord of lords,
who alone is immortal and who lives in unapproachable light,
whom no one has seen or can see.
To him be honor and might forever. Amen.
1 Timothy 6:8-16

21 comments on “is enough ever enough?”