“There is peace even in the storm”
Vincent van Gogh 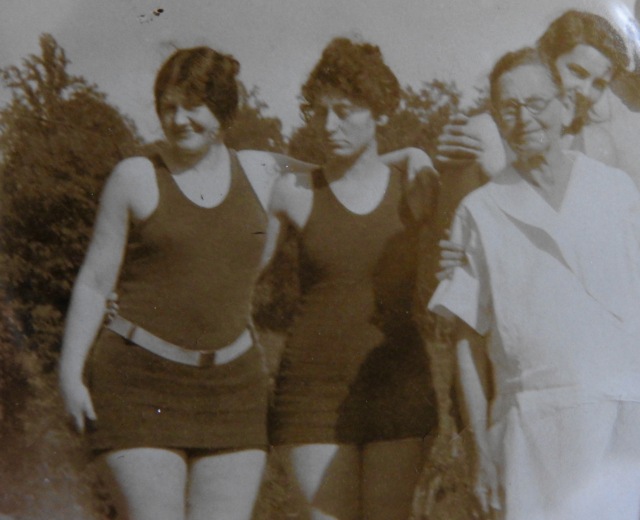 (from left to right:
Aunt Blanche, Aunt Alma, my great grandmother Wiliford, and shy Mimi (Mary)
hiding behind their mom / circa 1917)

When I was a little girl, I had two great aunts who were still living.
Aunt Blanche and Aunt Alma.

Both women rattled my nerves…
or maybe it was more like they simply scared me to death.

They were the sisters to my grandmother, my mother’s two aunts.

Blanche had never married.
For as long as I could remember, she had lived with my grandmother,
having her own separate area of the house.
She always seemed old to me.

The story went that she had had a young beau who had asked for her hand in marriage…but…he was California dreaming and bound, hoping to make his fortune
in a bustling new area of the country.

This was a time of one century turning to another.
The thought of leaving home and family in Georgia,
setting off to a still newly settled West Coast, with a young man who had nothing
more than a dream… was simply more than she could bear.
She turned down his proposal and remained single until she passed away in her
late 80’s.

The other great aunt, Great Aunt Alma lived in Clearwater, Florida.
She and her husband had no children of their own and in my mind,
they lived to simply play golf with the other old people.

This pistol of a woman was as wide as she was tall.
At 4’11” she was truly short and truly round.
Her perfume filled the room with a sickeningly sweet scent that lingered in
one’s nostrils long after she was gone.
When first arriving she would always make a bee line for little cheeks…
grabbing both cheeks with her thumb and index fingers, giving them a hard tweak and squeeze before leaving brightly red lipstick mark imprinted on both now sore cheeks.

Whenever we were told of an impending visit by Aunt Alma, a deep sense of dread
descended over both me and my younger brother.
Yet as I aged and grew up, my great aunt who by now was widowed, seemed to
be more gruff and impatient…far from embracing or loving.
She no longer grabbed to pinch cheeks or smear ones face with lipstick
but was rather matter of fact and brusque with her greeting.
Plus she would cuss like a sailor in her impatience.

I kept both of these women at arm’s length as their personalities and lives were not
overtly open to young people. They were nice and always gave nice gifts yet there was
no mistaking the fact that they preferred limited interaction with their
young great niece and nephew.

And so now it seems as if we have a new great aunt arriving on the scene…
one who has announced the coming of a most wicked visit.

Her name is Irma.

Somehow I imagine that she too is rather brusque and very matter of fact.
As she is also very round and and exceedingly wide.
We’ve been told that she will roar into town making her presence known in a
most deadly fashion.

Just as I had a sense of dread as a child over the forthcoming visit of great Aunt
Alma, I now have that same sense of foreboding with Irma’s impending visit.

Prayers for Florida as well as neighboring Georgia…..
as our prayers continue for Texas and Louisiana…

Then they cried out to the Lord in their trouble,
and he brought them out of their distress.
He stilled the storm to a whisper;
the waves of the sea[b] were hushed.
They were glad when it grew calm,
and he guided them to their desired haven.
Psalm 107:29-30

19 comments on “when a great aunt comes calling…”