“It is normal to give away a little of one’s life in order
not to lose it all.”
Albert Camus

Just when I thought life had become nutty enough,
what with our latest troubles over petty things like a war of words between a sitting president of the United States and our nation’s professional athletes,
I am resoundingly reassured that we are not alone.

For I am comforted in knowing that there are other nations out there battling
their own levels of crazy.

They say misery loves company…
I say bring an extra bag of chips as we get the party started….

Yesterday’s post had not been what I had intended to write.
Yet I felt deeply compelled to share the role model example, as well as the bravery,
of Steeler’s player Alejandro Villanueva.

I say bravery because Villanueva made a conscious decision to honor the flag and anthem while his coach, Mike Tomlin with input from his players, had decided
that his team would forgo the National Anthem in hopes of just missing the whole crazy divisive issue.

Yet I would imagine Villanueva, a former Army Captain, West Point Grad and
Afghanistan war veteran, and his coach had had a discussion prior to
the game and the anthem.
With that whole discussion most likely revolving around how Villanueva felt a bound duty
to both honor and salute a flag and a Nation that he has served in active duty and now serves as a role model the playing field.

Villanueva is a man who completely understands commands and orders…so I imagine there
was discussion over Villanueva’s need and desire to break ranks as it were with
his beloved Coach and team.

As we now read that Villanueva had not intended to be as noticeable as a “standout”
Sunday as he was…fearing he may have inadvertently thrown his teammates under
life’s proverbial bus.

Soldiers understand that probably better than most of us.
I doubt any of The Steelers feel as if they were thrown under any bus by a man who
chose to put his own life on the line for his fellow Americans.

I was tremendously touched by the comments offered on my post Monday regarding that
brave act by that brave man.

It seems I am not alone in feeling that US Capt. Villanueva
made the greatest one-man showing on Sunday despite that not being his desire
nor mission–yet selfless patriotism has a way of always coming to the surface.

So just when I thought our lives couldn’t become any more surreal than they
already are, I watched Monday morning the latest edition of Anglican Unscripted
featuring the Anglican cleric, The Reverend Gavin Ashenden.

And then, if that weren’t enough, I followed that up with the solid reading from the
latest offerings by the Scottish Pastor David Robertson on his Wee Flea Blog.

Firstly I will share a brief bit of what Reverend Ashenden has had to share regarding
some recent happenings on his side of the pond. 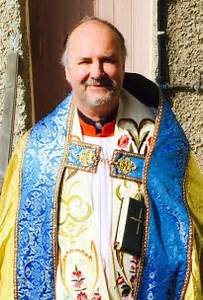 It seems that the Church of England has either totally lost its mind or has
totally gone the way of the ‘All Ensuing Cultural War Express’….

Recently a fashion show featuring the symbols, dress and attitude of all things Satanic
was permited to take place in of all places an Anglican Church located in London.

Just when I was pretty well convinced the we had totally lost our minds on this side
of the pond, it seems as if our cousins abroad have totally lost theirs.

When on earth does a catwalk featuring those decorated and dressed in Satan inspired garb,
complete with a Christian altar as a backdrop, make any sort of sense at all?

When on earth does a catwalk featuring those decorated and dressed in Satan inspired garb,
complete with a Christian altar as a backdrop, make any sort of sense at all?

Rev. Ashenden pointedly reminds his listeners that if there be
any Christian among us who has the Holy Spirit residing in his or her soul…
of which would be a good many of the faithful, he or she would assuredly have felt a tremendous amount of consternation over having seen such a spectacle….

I know I did when I watched a few snippets of the “show.”

Rev. Ashenden proceeds to explain that there is a battle on this earth that
is a a battle of both Good and Evil and it is very much alive and very much real.
And if any of us foolishly think otherwise, then we are in store for a very frightful awakening.

Imagine Satan’s glee—his very own fashion show, featuring some of his best inspired
fashion, taking place in a House of God…

Oh the irony found in that one notion alone…

Anglican Unscripted – Satanic & Masonic fashion in the C of E.

He takes a look at a variety of ills plaguing both the EU and the UK even venturing to
the land down under.

(am I the only one who sees a problem with this image from an Australian college campus?? Last I checked, no one was recommending burning homosexuals but apparently it’s ok
to burn a church)

Australia is now locked in a death roll regarding same sex marriages.

The good pastor notes “Well, they did warn us it would happen.
They said they did not want a referendum on same sex marriage because of
the hatred it would allow to be displayed.
They were right.
The Australian referendum debate has turned really nasty – not as some feared
with people taking the opportunity to express their homophobic hatred,
but rather because of those who are all into ‘love and tolerance’
being full of hatred and intolerance towards any who would dare to
disagree with them.

Pastor Robertson lastly offered a small step back in time.
He offered a “story of the week” 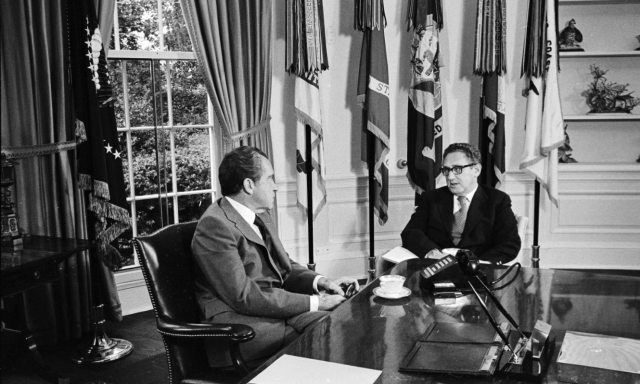 (Nixon and Kissinger in the Oval Office)

Story of the week –
I loved this story about Nixon.
Kissinger’s account from Woodward and Bernstein The Final Days.

“The president was drinking.
He said he was resigning.
It would be better for everyone.
They talk quietly – history, resignation decision,
foreign affairs.
Then Nixon said he wasn’t sure he would be able to resign.
Could he be the first president to quit office?
Kissinger responded by listing the president’s contributions,
especially in diplomacy.

‘Will history treat me more kindly than my contemporaries?’

“Certainly, definitely,” Kissinger said. “When this was all over,
the president would be remembered for the peace he had achieved.”
The president broke down and sobbed…How had a simple burglary,
a breaking and entering, done all this?

“Kissinger kept trying to turn the conversation back to all the good things.
Nixon wouldn’t hear of it. He was hysterical.
‘Henry, ‘he said, ‘you are not a very orthodox Jew,
and I am not an orthodox Quaker, but we need to pray.’

Nixon got down on his knees.
Kissinger felt he had no alternative but to kneel down too..
The president prayed out loud, asking for help, rest, peace and love.
How could a president and a country be torn apart by such small things?
Kissinger thought he had finished but the president did not rise.
He was weeping…
‘What have I done?
What has happened?
‘Kissinger touched the president, and then…
tried to bring rest and peace to the man who was curled on the carpet
like a child.
Kissinger again tried to reassure him…
Finally the president struggled to his feet.
He sat back in his chair.
The storm had passed.
He had another drink”

I for one did find forgiveness for President Nixon as I have opted to remember
the good works that Nixon actually did accomplish while in office….and there were many
such works.

May God have mercy upon our souls….

“Even now,” declares the Lord,
“return to me with all your heart,
with fasting and weeping and mourning.”
Rend your heart
and not your garments.
Return to the Lord your God,
for he is gracious and compassionate,
slow to anger and abounding in love,
and he relents from sending calamity.
Who knows? He may turn and relent
and leave behind a blessing—
grain offerings and drink offerings
for the Lord your God.
Joel 2:12-14