I am the keeper of the shrubbery.

Add to that, I’m really too old for shrubbery.

Meaning I plant it…I prune it, I sheer it, I chop it…
and somedays, I’d just like to burn it to the ground.
Think 5 acres that need tending to….as I’m knocking on the door of 60.

Usually I do a complete maintenance overhaul of the yard each spring…
But this past spring saw me serving vigil with Dad…
Then following his death it was a matter of sorrow and picking up the pieces.
There wasn’t much energy for bushes.

I’m still picking up the pieces, still dealing with his dealings…and some days,
I just can’t do much but still just be sad…
Throw in losing Aunt Maaaathaa in July and well…the yard…
well it went to the wayside….to the way way way side….
kind of like my get up and go.

Too much sadness has a way of stealing that get up and go.

I usually trim the shrubbery twice a year…first in the spring—
then I like to tidy up things come fall, readying everything for the winter.
Think Martha Stewart sans all the helpers….

In order to put out some fresh pinestraw, the bushes need to be trimmed.
Did I mention those two pesky blown out discs from last year…
well, they’re still blown and they make getting up and going none too easy.

And oh, and did I mention another hurricane is coming?

The fresh pinestraw is to be delivered mid week, the hurricane is coming Sunday and Monday… a two day event of winds and rain, rain and rain…of which the rain
is most needed this time of year.

All of which meant today was the day in which the trimming and cutting
had to get done…
otherwise the bushes would take over the house and no amount of fresh pinestraw
could hide that little fact.

You know it’s bad when St Francis has been consumed by the bushes.

Throw in one electric hedger…. 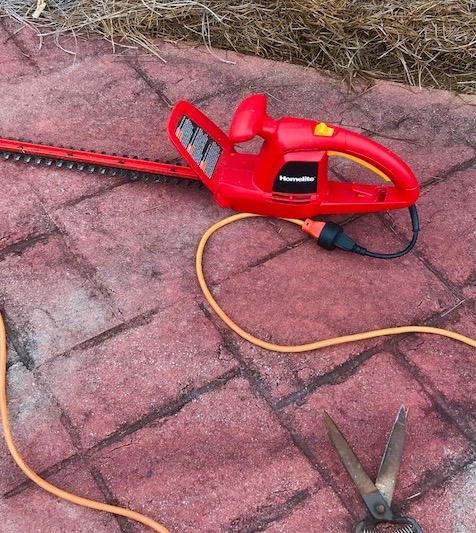 and St Francis is now free…..

Which reminds me, the feast day of St Francis was Wednesday, Oct 4th.

Most folks, those of the faith as well as those not, think kindly of Francis.
He loved the animals don’t you know.
And who doesn’t like someone who loves the animals?

Yet there was much more to Francis than a love of animals.

I’ve written about Francis before.

And since I’m now past exhausted and very sore from my pruning and freeing Francis
from the bushes, I’ll keep this short and sweet….

No, Francis wasn’t always the peaceful loving monk with the funky haircut
(tonsure) that we know and love today…

Rather Francis was all about loving the world.

He was a spoiled rich kid who loved to party.
He was what we might call a bit of a ’rounder’…
meaning a wild young man given to a wanton life of drinking too much,
chasing women too much and working way too little.

Yet Francis found this sort of life of his…lacking.
As in empty.

Despite being very popular, a hearty partier and a well dressed dandy,
Francis felt less than.

There was a heaviness to his being…one he just couldn’t understand.
An emptiness that no amount of parties, or money or friends could fill.

And then God literally called his name….

That God can see into the wantoness of the worldly something actually redeeming…???!!
Something more than and something He wants!!!

Meaning…there is truly hope for us all!!!

I have swept away your offenses like a cloud,
your sins like the morning mist.
Return to me,
for I have redeemed you.”
Isaiah 44:22