“I do not choose anyone to have it in his power to command me,
nor will I ever suffer it.”
King Henry VIII 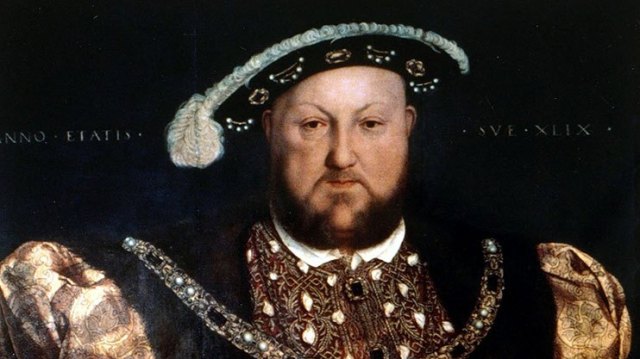 Four years following Martin Luther’s shot heard around the world with the nailing
of the 95 grievances to the doors of the Wittenberg Cathedral, a then 30 year old
British monarch published a very hostile letter condemning Luther’s act
of “holy” defiance.

Henry VIII had been on the English throne for almost 12 years when he flexed his royal
muscle by letting all of Europe know how he and Great Britain viewed Luther’s
new movement. The British crown would not, according to Henry, be following suit.

Henry had always been a religious man.
He heard mass five times a day unless he was hunting (then he could only hear three).
He was also deeply interested in theological disputes.

In 1521, with Lutheranism infecting the English universities, Henry wrote Defense
of the Seven Sacraments against Luther.

In recognition of Henry’s forceful piety, Pope Leo X awarded him the title
“Fidei defensor,” or Defender of the Faith.

But scarcely a decade later, Henry led a schism of his own,
cleaving the Church of England from the wider Catholic Church after Pope Clement VII refused to annul Henry’s 16-year marriage to Catherine of Aragon.
(Histroy.com and Christianity Today)

Born and raised a devout Catholic and married to an equally deeply religious Catholic woman, the Spanish princess and widow of his older brother Catherine of Aragon, Henry appeared to be the most likely emerging European monarch to be the defender
of the faith outside of Rome…a monarch who would help stave the bleeding of a
now shaken Church in the wake of Luther’s shake up.

That was until both lust and power blinded Henry’s faith.

The Church of England was birthed not because of a German monk’s open defiance
against the Church of Rome, but rather because a married monarch wanted a woman he
was blindly besotted over.

Ann Boleyn toyed with Henry’s overtures, refusing to be his mistress.
If he wanted her, which he desperately did, he would have to divorce his wife
in order to marry and finally bed Ann.

The problem with such was that both Henry and Catherine were Catholic
and the Pope was not about to grant a divorce or annulment of a marriage that was considered by the church,never mind by God himself, as a sacred union.

It also didn’t help matters that Henry had grown frustrated that Catherine,
despite numerous miscarriages and a healthy daughter, had never born him a son
who would in turn be his heir to the monarchy.

Henry, blinded by his lust and wants, was not going to let the Pope in Rome
dictate his life nor his wants nor his needs there in England.

In a nutshell, Henry, with the aid of a hand full of loyal clergy to the
British crown, defied the Pope…who in turn excommunicated Henry.
Thus the English Reformation and the Church of England was born as Henry became
the first, in what would become an ensuing long line of succession, known as
the Supreme Governor of the Church of England.

And so is it any wonder that today the Church of England, along with her spawned
cousin The Episcopal Church of America, is in crisis…
as man’s agenda still continues to reign supreme.
How can anyone expect God to bless let alone honor an institution that’s
very inception was steeped in that of defiance, lust and selfish desire…

Many would scoff at such a simplified notion…
scoffing over such a thought as being nonsense as it is really all
so much more complicated than a king’s desire for divorce….

For I can’t help but see the correlation.

The unraveling began when a monarch put his own wants and desires above that of
those he governed, as well as above his own faith and relationship with his Creator.

That is not to say that there hasn’t been deeply pious individuals who have
followed these denominations down through the ages….yet when something is conceived without the true Grace and or Blessing of God, how can anyone expect it to survive let alone thrive?

English schoolchildren remember Henry VIII’s daughter as “Bloody Mary,”
an allusion to the more than 300 Protestants the staunchly Catholic Mary I
had put to death during her five-year reign.
In truth, though, Henry VIII was by far the bloodiest Tudor ruler,
ordering tens of thousands of executions during the tumult of the English Reformation. (Henry’s most famous victims included his former top advisor Sir Thomas More, as well as two of Henry’s six queens—Anne Boleyn and Catherine Howard).
History.com

“The Church of England will collapse under its own weight within quite
a very short time.
There must be a planning of a new idea…we must plan for a very different future…”
The Rt Rev Gavin Ashenden

The Son is the radiance of God’s glory and the exact representation of his being, sustaining all things by his powerful word.
After he had provided purification for sins,
he sat down at the right hand of the Majesty in heaven.
So he became as much superior to the angels as the name he has
inherited is superior to theirs.
Hebrews 1:3-4