Our dear Oneta over on Sweet Aroma
https://onetahayes.com
has asked for our prayers.

Seems she is in the hospital awaiting surgery for a sudden broken hip.
I told her we’d be right on it…

When two or three are gathered…..

“This is quite a fight.
Orthodox Christians believe that we are caught up in a very serious struggle between Good and evil,
and evil tries to trick us and hide the good from us;
usually by dressing up something corrupt which pretends to be goodness itself.”
Bishop Gavin Ashenden

“It seems to me that there is ‘a spirit of dizziness’,
not only in the hysteria of the mob culture we live in,
not only amongst the liberal anti-Gospel leaders in the Church (such as Bishop Curry);
but now sadly even amongst good and faithful evangelical leaders,
who seemed to swallow the Bishop’s hook, line and sinker.”
David Robertson 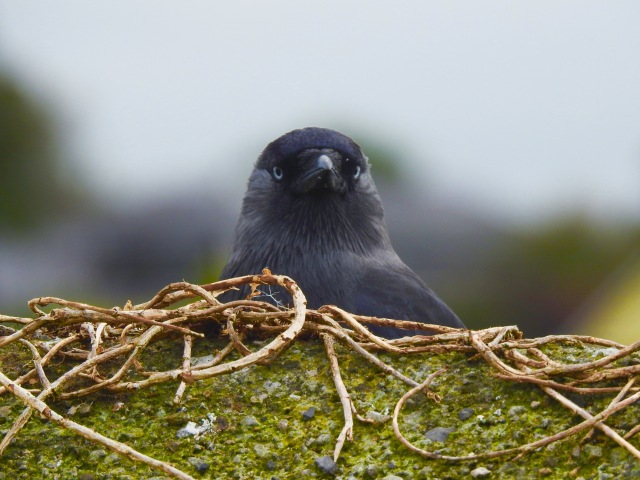 (a curious jackdaw watches from the crumbling walls at The Rock of Cashel,
County Tipperary, Ireland / Julie Cook / 2015)

I am amazed more and more each day the way in which Satan is at work.

Yet here’s the thing…
most of us don’t like to acknowledge Satan because if we do, we scare ourselves.

Or if we do acknowledge him, we try to make him very small…for that same very reason…
that we tend to scare ourselves with such thoughts.

However we should know, he likes that.

The smaller the better…
An out of sight out of mind sort of approach.

Christians and most folks in general, don’t like being reminded of things
like Satan…that whole ying-yang business of Christianity, faith and a belief in God
countered by an acknowledgment of darkenss, evil, sin and Satan.

So instead of filling our minds with the negative of bad things,
we prefer to just go about our daily business with little to no thought
of a devil, or evil, or names such as Lucifer or Satan.

That is until something really bad happens, forcing us to take notice…
But then we will, just as abruptly and quickly, turn away as a child with our fingers thrust
in our ears refusing to hear or acknowledge the truth for what it is.

So it is those quiet little day to day advances that Satan takes great pride in…
a stealthy approach to our demise.

That being the back door of their lives.

I would remind them that Satan does not like to use the front door…
because he does not like to be so obvious nor readily announced.
Rather he prefers using the back door.
A door that is most often overlooked, most often unlocked,
and if the truth be told, left propped open for easy comings and goings.

Elder Paisios, who was a well known Eastern Orthodox ascetic monk who spent the majority of his
life living in a monastery on the holy island of Mt Athos just off the coast of Greece,
once wrote that
“The devil does not hunt after those who are lost; he hunts after those who are aware,
those who are close to God. He takes from them trust in God and begins to afflict
them with self-assurance, logic, thinking criticism.
Therefore we should not trust our logical minds.”

And it is indeed along the lines of this spiritual affliction of ours,
or more aptly, this insidious spiritual warfare which is currently besieging Christianity,
that both our friends the Wee Flea, Pastor David Robertson, and our favorite rogue Anglican
bishop have each addressed in separate posts offered in just so many days apart.

In the last 48 hours, both clerics have been asked and have offered a few thoughts regarding
the gala which took place this past weekend in the UK.

And in case you missed it…the gala in question was a small wedding that transpired between
one of the Queen’s grandson’s and an American bi-racial, once divorced, actress.

It has been quite the fodder for the tabloids as well as all things news.

Let all of that sink in.
A British Royal former bad boy playboy and a divorced, bi-racial American actress.
Oh the cultural kumbiya found in such a union! Why then shouldn’t the Archbishop
opt to use a wedding as a commentary for the progressive culture wars?!

And whereas the spectacle itself was enough to send all of the entertainment industry,
Hollywood’s ilk and kin, as well as all things newsy into a royal dither, the Archbishop
of Canterbury had to add his own special touch by inviting an American Episcopal cleric,
an invitation mind you that was unbeknownst to the happy soon to wed couple, to come
participate in the ceremony and whip up the already salivating participants and the news
anchors into a higher level of a spinning tizzy then whence they previously were.

Bishop Ashenden notes that “The dear couple had no idea who was being asked to
preach at their wedding.
It was an idea that Justin Welby, the Archbishop of Canterbury,
had suggested to them.
They were hardly in a position to know or refuse…

So when Justin Welby suggested Michael Curry as the preacher on this astonishing
world-wide stage, he was also signing up one of the most effective street fighters
for progressive, distorted Christianity who – with great charm and verve –
presents his own preferred version of Jesus to the real one we find in the Gospels.

And yet many folks will have missed the full impact of such a speaker at such an event.
The good bishop reminds us that by having such a speaker as a Bishop Curry this
“matters very much.”

Curry spoke of fire, love, slavery, sex and yes, Jesus in a very lively, entertaining and
most animated fashion.
In other words, he was the entertainment.
However entertainment that many mistakenly thought to be great Gospel teaching…
but the problem was that his “teaching” was anything but that of Holy.

Bishop Ashenden observes that “Curry’s Jesus is preoccupied with social Justice and the
celebration of romance and sexual love wherever it finds you.
The real Jesus warned that social justice would never happen in this world,
that heterosexual marriage was to be between a man and a woman,
and that equality had nothing to do with the Kingdom of Heaven.

Curry twists that round and turns it upside down. He says Jesus likes homosexual marriage
and favours the quest for equality that left-wing politicians have made their life’s work.
Curry says wherever you find ‘love’ you have found God.
But when Jesus defines love it sounds very different from Curry.

Love for Jesus starts with honouring and obeying the Father who created us and
renouncing anything that displeases Him and pollutes his holiness.

Jesus warned his followers time and time again against people who would come in
His name and teach different things.

What we have in the Anglican world at the moment is a struggle for the soul of the Church
and a struggle to tell the truth about God and present the real Jesus.

There is a wonderful saying from Orthodox (Eastern) Christianity,
that our aim ought to be ‘to stand before the real God with the real self with our mind
in our heart’.”

And so what we have is just another back door we’ve left open.
The back door to a very worldly and cultural event in which we’ve allowed to become
something it is not…that being a sanctioned and ordained act of God.

And whereas I am not inferring that an Archbishop nor a Bishop are of the devil, I do
believe however that their own personal backdoors have been left wide open as they
work very hard to twist and rewrite the Gospel to suit today’s most progressive
agenda-

Could we, in our wildest imagination and dreams, think that those who wear collars or
those who stand in pulpits or those who hold bibles could ever be capable of a
distorting, twisting or even changing the very doctrine of our faith,
our beliefs or rewrite the very words of God???
Surely not.

Yet were we not warned that even the devil’s own can easily quote scripture?

“In truth there is only one freedom – the holy freedom of Christ, whereby He freed us from sin,
from evil, from the devil.
It binds us to God. All other freedoms are illusory, false, that is to say, they are all,
in fact, slavery.”
St. Justin Popovich

Links to both posts here:

The struggle to tell the truth about Jesus. Welby, Curry and the integrity of the Gospel.