A christian martyrdom is never an accident,
for Saints are not made by accident.”
T.S. Eliot

“What Saint has ever won his crown without first contending for it?”
St. Jerome 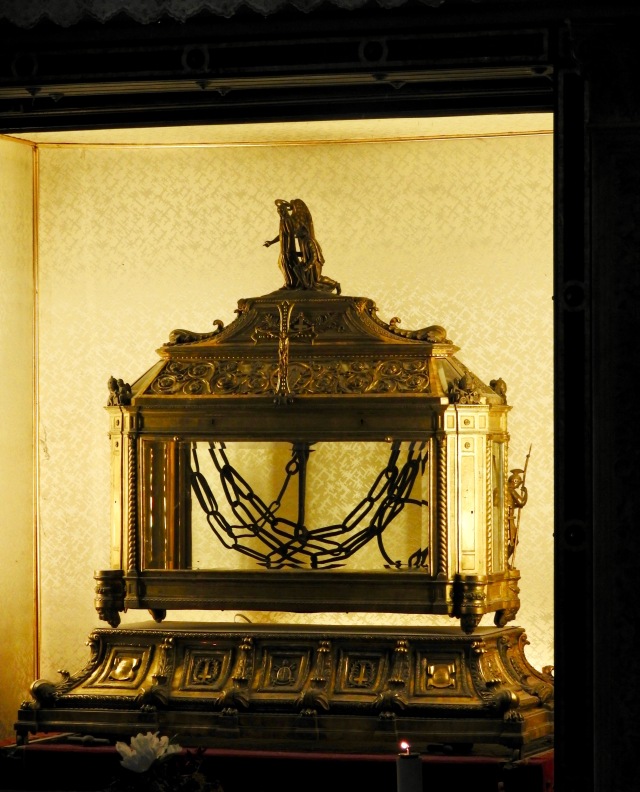 So Peter was kept in prison, but the church was earnestly praying to God for him.

The night before Herod was to bring him to trial,
Peter was sleeping between two soldiers,
bound with two chains, and sentries stood guard at the entrance.
Suddenly an angel of the Lord appeared and a light shone in the cell.
He struck Peter on the side and woke him up.
“Quick, get up!” he said, and the chains fell off Peter’s wrists.

Then the angel said to him, “Put on your clothes and sandals.”
And Peter did so. “Wrap your cloak around you and follow me,” the angel told him.
Peter followed him out of the prison,
but he had no idea that what the angel was doing was really happening;
he thought he was seeing a vision.
They passed the first and second guards and came to the iron gate leading to the city.
It opened for them by itself, and they went through it.
When they had walked the length of one street, suddenly the angel left him.
(Acts 12:5-10)

The bonds, according to tradition, once held fast the limbs of St. Peter the Apostle
and have been cherished by Christians since the first century.

The story of their veneration first appears in the ancient Acts of Saint Alexander,
an early pope who died as a martyr in AD 115.
As he awaited his own execution, he received a visit from Quirinus,
the nobleman who oversaw the prisons in Rome.
The man’s daughter Balbina was desperately ill,
and he had heard that Pope Alexander had the power to heal her.
She was completely cured when the pope touched her with his chains.
Balbina wanted to kiss the chains in gratitude —
but Alexander instructed her to find the chains of St. Peter and honor them instead.

Balbina became a Christian–and, according to some accounts, a consecrated virgin–
and she arranged for the construction of a shrine for St. Peter’s fetters.
It would be rebuilt and moved and expanded through the centuries.

There are abundant testimonies to the presence of these chains in Rome.
St. Gregory the Great, who reigned as pope from 590 to 604,
was intensely devoted to the relic and often sent small filings as gifts to dignitaries–
to Constantina Augusta, the Byzantine empress; to a bishop named Columbus;
to King Childebert of the Franks; to King Rechared of the Visigoths; and to Theodore,
the court physician at Constantinople.
He would place the filing in a key-shaped reliquary–
the key representing Peter’s authority.
He sent each particle with a prayer
“that what bound [Peter’s] neck for martyrdom, may loose yours from all sins.”

The chains are today exposed for veneration in a gold and glass reliquary in the
Basilica of San Pietro in Vincoli, on Rome’s Oppian Hill,
a church built in the fifth century during the reign of Leo the Great.
(Catholic Education Resource Center)

The Basilica of St Peter’s in Chains is what we consider, by Catholic Chruch standards,
as a minor basilica…meaning it is not one of the four Major Basilicas in Rome…
Rather it is a church of perhaps lesser significance but, in my opinion, it is still
significant none the less.

Say what you will about the Catholic Chruch, there is simply no denying that our roots,
our Christian roots, run deep in and through Rome.
That which had become known as the Latin West Chruch.

In the very dust of this city that is oozing with a vast array of sensory overloads,
rests the shadows of those who went long before us, all helping to create the history
we hold dear to this day.

At the time of Jesus’ birth, life, ministry, and eventual death, Rome was considered to be
the center of all that was and is.

A great and mighty empire who’s arms reached far and wide…even to the obscure
desert outpost of Judea.

The Roman Empire and the life of a Jewish carpenter were on a collision course.

Rome was considered the epicenter of this once mighty Empire…the seat of its government.

Scripture tells us that both Peter and Paul traveled to, preached throughout,
were each imprisoned in and were both eventually executed in this once important
center of all of humankind.

Yet today’s chaotic, trendy, chic and often very dirty city is a far cry from the city
that once “ruled the world.”

Just this past weekend there was a massive citywide protest as demonstrators took to
the streets showing their disdain for Rome’s crumbling infrastructure,
its overflowing trash and the fact that rats and even wild boar now roam this once
orderly city seeking out the overflowing trash.

Yet Rome remains a rich treasure trove of our human history.
From art to architecture, from the sacred to the mysterious, Rome offers the curious a
fantastic feast.

The Basilica of San Pietro in Vincoli is but one treat in this Roman feast.

Many people come here not so much to see a box of old chains but rather they wish
to see a masterpiece of marble and craftsmanship–
up close and personal, that of Michelangelo’s Moses. 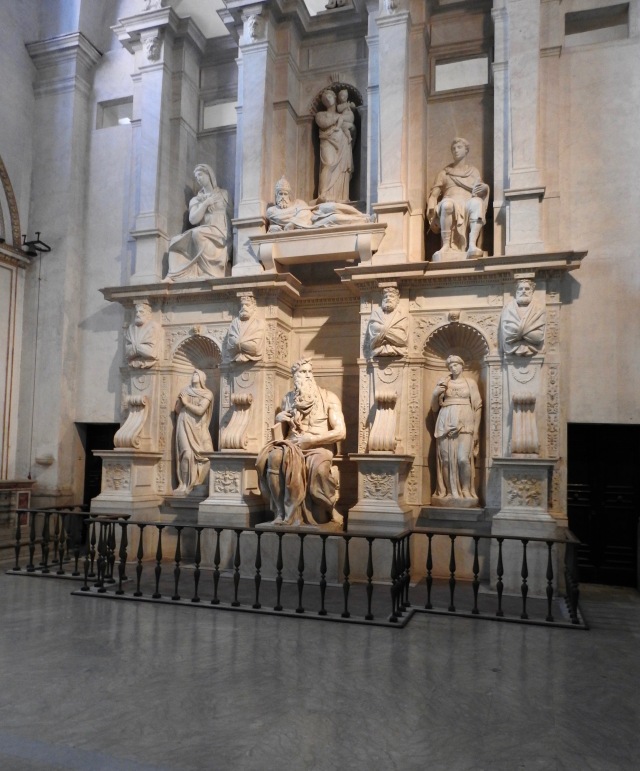 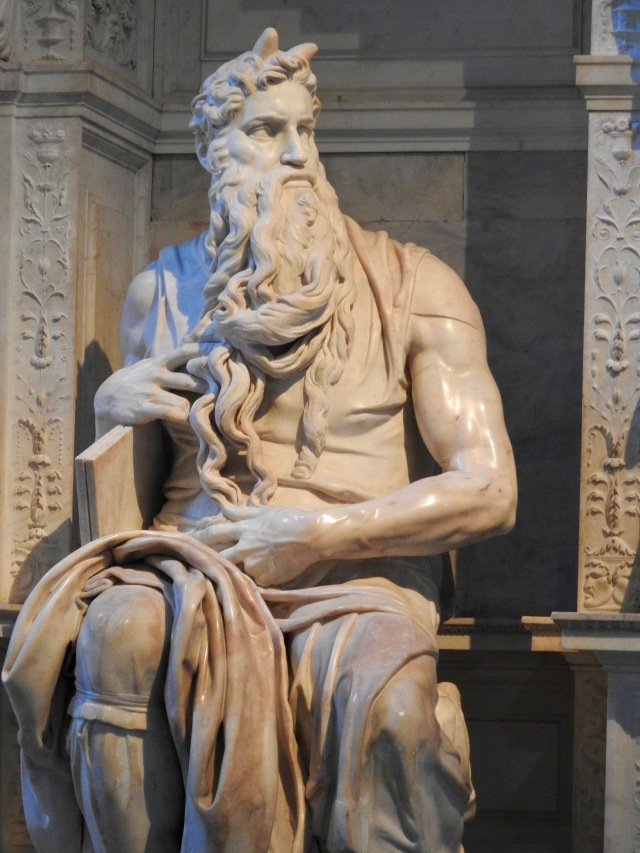 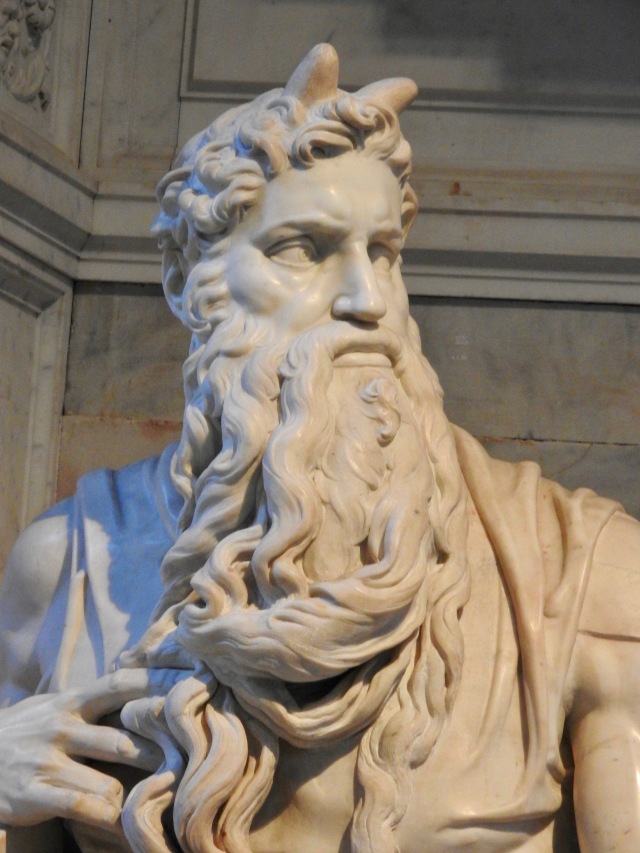 As Michaelangelo never considered himself to be a painter but rather a sculptor only, he felt
a deep sense of angst over having to work on such a massive undertaking of painting.

A painting that millions of people now flock yearly to see.

He actually ran away at one point, attempting to escape the demands of the man who history
now attributes to be the pope who brought St Peter’s to the glory that we marvel over today.
The Pope actually sent his soldiers to Florence to retrieve Michaelangelo…
bringing him back to finish his commission, of which they did and Michaelangelo in turn
eventually did.

Fortunately or unfortunately, however, Pope Julius II died before Michaelangelo could finish
the massive tomb. Yet luckily today for both the curious and the tourist,
we may view this lesser monument here in the Basilica.

The statue of Moses is the central figure that draws all attention.
It is a single massive piece of Carrara marble.

Looking closely one sees that Moses has what appears to be horns protruding
from his head. But the horns are due to a mistranslation.

Michelangelo’s Moses is depicted with horns on his head.
He, like so many artists before him, was laboring under a misconception.
This is believed to be because of the mistranslation of the Hebrew Scriptures
into Latin by St Jerome.
Moses is actually described as having “rays of the skin of his face”,
which Jerome in the Vulgate had translated as “horns”.
The mistake in translation is possible because the word “keren”
in the Hebrew language can mean either “radiated (light)” or “grew horns”.
(Rome.Info)

And whereas I will always stand in awe and marvel anytime I have an opportunity to stand
and gaze on a massive piece of marble that a seemingly otherworldly gifted man managed to
coax out an unbelievable miracle of vision and craftsmanship,
it is to the box of chains that held my fascination on this most recent visit.

Those who are jaded or who scoff over the significance afforded to something, that may or
may not be what it claims to be, may certainly be that way and question.

And whereas I cannot say yay or nay as to the authenticity of these chains…
Were these the actual chains that held Peter?
I don’t know if any of us can ever say, and  yet to me,
it is not whether they are or are not what they claim to be which is important
but is to where they direct my thoughts.

They have been on display since the year 115,
roughly 47 years following Peter’s execution in Rome.

I have sat in the Mamertine prison.

Sitting in the dark, on a small ledge, contemplating the fate of those who
were once kept in this underground dungeon.
It is, as it was then, a dark enclosed dungeon..an outcropping that now sits at the
foot of Capitoline Hill. A Christian church now sits atop this prison.

Prisoners were lowered by ropes down into this pit of a prison.
It is the prison said to have once held both Saints, Peter and Paul.

Peter was bound in chains when he held as a prisoner in the Herodian prison
as well as the Mamertine prison.

So as to this miraculous union of two separate sets of chains binding together as one,
again, is beyond my ability to say…

No chain, no boundary, no weight, no limitation exists that can hold our Mighty God.
Small things such as a box full of historical chains are but a physical reminder of this.

Sometimes we need, I need, those physical reminders because my mind, our minds,
are so limited whereas our God is so limitless.

And so as Pope Gregory the Great reminds us…
“that what bound [Peter’s] neck for martyrdom, may loose yours from all sins.”