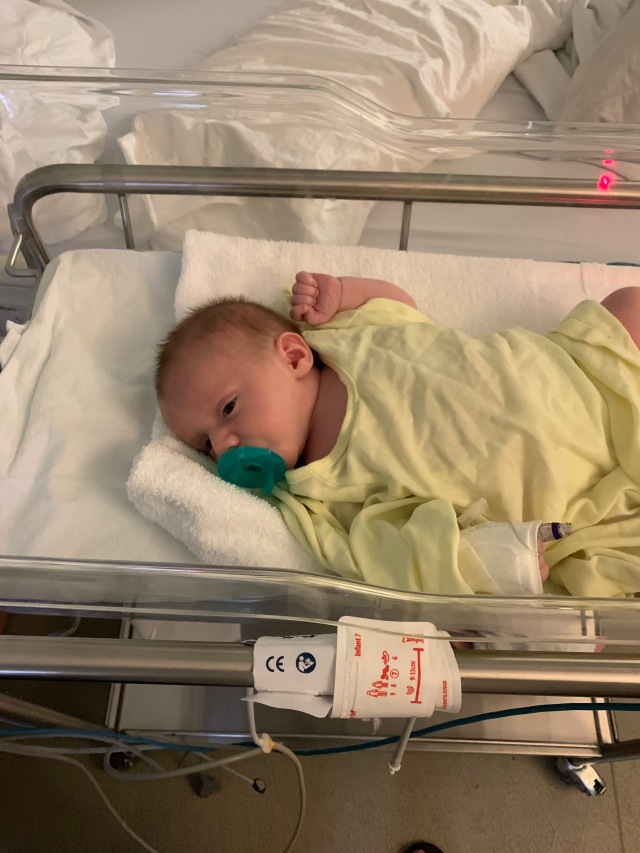 First…I want to thank each of you from the bottom of my heart for your continued prayers
for this newest family member of ours.

My husband and I had thought to steal away for a few days while our son is still on paternity leave—
because once he heads back to work, I’ll head back to Atlanta in order to help out.

Throw in a cat (Percy) who will have a joint fusion surgery the first of June,
and time is nowhere near on my side.

We had only been at our beach destination a few hours when we got the call
from our son that they had raced 3-week old baby James to the ER due to an out of the blue high fever.

The Children’s hospital began running a myriad of tests including a spinal tap and an ultrasound
on his kidneys.
His white blood cell count was high.

They are currently treating him with antibiotics through an IV for a urinary infection with
the concern that he might have something known as urine reflux–where the urine flows back into
the body…
Tomorrow they will conduct a dye test in order to monitor the flow.

Remember he was born with what is thought to be a skewed urethra and so his circumcision is
going to have to be delayed….
this new caveat may or may not necessitate some sort of faster action.

They’re hoping he can be released by Saturday.

Meanwhile, we drove nearly a 10-hour roundabout way from Florida to Atlanta back
to Carrollton.
We drove to Atlanta to pick up Autumn (aka The Mayor) visited with our son while
he and our daughter-n-law are tag-teaming time at the hospital.

Did I mention the gas leak?

We were up visiting Sunday. Our daughter-n-law kept telling us she smelled gas.
My husband and son scoured the basement but couldn’t really detect much of an odor
but we did catch a whiff now and then.

We called GA Nat Ga and they sent out a technician.
He did find a small leak leading to the hot water heater from a pipe that
had bowed over time.
He fixed it.

Then as soon as we had left on our trip, they called up saying the smell was stronger.
Another call and another technician found a larger leak.
The gas was cut off to the house which now means no hot water.

So a different plumbing technician has to come out this evening while either our
son or daughter-n-law is home from the hospital.

And so while the Mayor is non-stop and is here with two exhausted old people, I’ll
be a little slow to respond to all of the kind words offered our way…of which mean
so very much—a community of prayer warriors has blessed us beyond measure.

16 comments on “update on James”