“Life is what happens to us while we are making other plans.”
Allen Saunders

Sunday we drove over to see the Mayor and her new Sheriff.

Lunch sounded like a plan so we headed over to the Battery…
otherwise known as Suntrust Park, the new home of the Atlanta Braves Baseball team.

The team actually wasn’t home but had traveled up to Philly in order to play ball—
so we opted to take advantage of their absence and visit their vacated home
for a fun-filled and much less crowded afternoon.

My husband likes to say that they built a baseball stadium inside
of an outdoor mall.

The Stadium is surrounded by a live, work, play, visit, eat and drink area known as
the Battery.

There are greens for kids to play on, fountains of water for kids to run and jump in,
restaurants galore…from cheap eats to galm good. A hotel, apartments, shops,
bars, ice-cream shops…giant screen TVs showing the latest game…you name it,
The Battery has it.

Something Atlanta was in great need of.

Clean and family-friendly on the more northern and western side of the city
And technically it’s not in the city of Atlanta but rather in Cobb County,
north of the city and closer to Marietta.

One of the myriads of restaurants is actually an outpost to one of Atlanta’s more
famous BBQ joints…Fox Brothers.

And you should know that I rather fancy myself as a bit of a rib aficionado.

Smoky, sweet, salty, savory, spicy, tangy, fall off the bone and melt in your mouth…
type of aficionado…
Of which pretty much sums up a good plate of BBQ ribs from Fox Brothers

It was just about a month ago when my son first introduced me to Fox Brothers and
I must confess, I’ve never looked back.

Fox Brothers is just that, a place owned and operated by two pit master brothers
from Texas who made their way to Atlanta.
They’ve been featured on Diners, Drive-Ins and Dives, The Travel Channel,
The Today Show,The BBQ Trail, etc.

So we loaded the kids up in the car and all 6 of us trekked over to The Battery
for lunch and a bit of fun family time.

Following a heavenly meal, The Mayor was most keen to visit the water fountain.
Not so much to throw in 3 coins to the fountain, but rather to partake in
a splashing good time…of which she did—as in we had to change her clothes before
we headed back home because she was soaked to the bone. 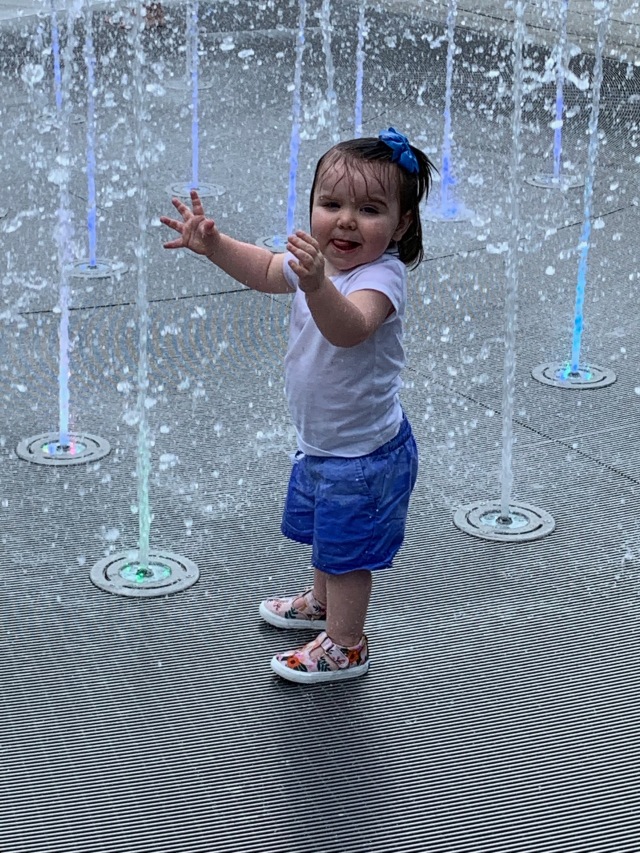 Meanwhile, the poor Sheriff just didn’t know what to think!

Train up a child in the way he should go;
even when he is old he will not depart from it.
Proverbs 22:6

19 comments on “Shenanigans, BBQ and the Mayor… along with her Sheriff”