Amazement awaits us at every corner.
James Broughton 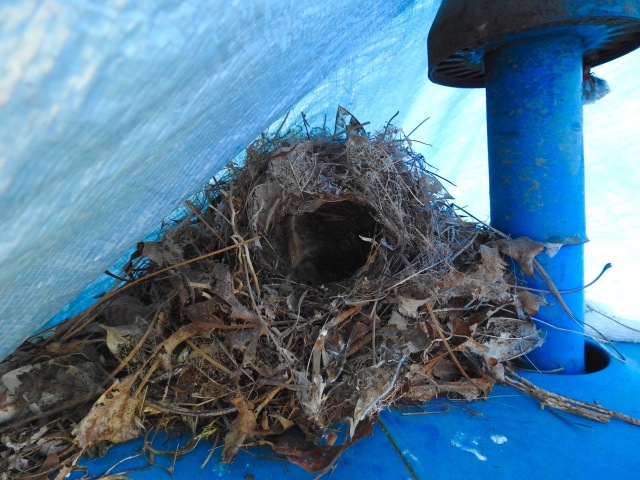 Amazing…
on so many different levels…
simply amazing…

Away from the havoc which has been beset upon us in these most recent of days..diverting ourselves away in which to wander…

Wandering away ever so slightly from that which is directly in front of our eyes…to that which is somewhat removed…
Blessedly and amazingly removed.

Yet, we must take note, it is to be no less, simply amazing.

And maybe since it is somewhat removed, tucked away and elusive in nature…
it is all of that, and so much more, which adds to the sheer amazingness of it all…

Let us now wander away to the world of the amazing…

On Sunday, 3 days ago, this empty jumble of leaves, with the giant hollowed out hole in the middle, was a dizzying beehive of activity.

The stakes were high.
For there were five hungry mouthes which had to be fed.
We were all made keenly aware of this one important fact.
Life was suddenly all a flutter, literally.

Squawking and screeching two very busy parents hunted, pecked, chirped, sung, guarded, protected and fiercely chased away any friend or foe from the home of their 5 tiny offspring.

Not only had they labored to construct, dare we say craft, this amazing conglomeration of sticks,
leaves, feathers and fuzz…
they had selected a most safe, protected and hidden site in which to set up house.

Birds are amazing that way.

They worked tirelessly almost undetected…all but for the presence of a busy bird who could be seen darting, scurrying ad flitting here and there.
Eggs were silently laid and kept warm…unbeknownst to the unsuspecting nearby humans.

Yet all of that changed at hatching time.

There would be silence…then as soon as a parent neared,
the inharmonic din of chatter began.
It was as if the sound translated into a clamoring repetitiveness of
“feed me, feed me, feed me…feed us… NOW”)

Then this past Sunday the nervous frenzy reached a crescendo.
As the tiny aliens mysteriously sprouted feathers as heads began to match bodies as wings took shape.
The parents were now worked into a fevered pitch as babies, turned fledglings, were soon to spread their wings. Mom and Dad were keen to create a safe zone, free of humans, cats and others
as their children would need some room to roam…safe yet free.

“Did they fly away??” you pensively ask.

As birds and their Divine Creator are each amazing that way….

The Lord, your God, is in your midst,
a warrior who gives victory;
he will rejoice over you with gladness,
he will renew you in his love;
he will exult over you with loud singing
Zephaniah 3:17

If you hear a voice within you say you cannot paint, then by all means paint and that voice will be silenced.”
Vincent van Gogh

You painted me a picture as lovely as can be. . .
a sweeping sea of color as far as the eye could see

First blue, then purple, then pink and red
A quilt of many colors before me you have spread

Yesterday, today and tomorrow will always remain the same
With you forever waiting for me to finally call your name

You painted me a picture that is truly one of a kind
A picture made from your heart, love so amazing and Divine