The great thing, if one can, is to stop regarding all the unpleasant things
as interruptions of one’s ‘own,’ or ‘real’ life.
The truth is of course that what one calls the interruptions are precisely one’s real life —
the life God is sending one day by day.
C. S. Lewis

Please pardon the interruption in service, but The Mayor is currently in residence…

Her royal ruler (aka self-appointed official) has proclaimed that any and all technology
will be used sparingly during her audit of the satellite office of Woobooville.

Some staff members are very worried…

So while the Mayor settles in for a few days conducting her reign of terror,
I may be a bit scarce here in blogville as I tend to her every beck and call…

(the Mayor has taken over the offical chair of the stellite office’s boss, aka Da or Papa)

Our life will be a success if, at the moment of death,
we have in our soul the life above our nature, the Supernatural Life.
It will be a failure if, at death, we have not the Supernatural Life.
For if we have it, then we have in our soul the powers that would enable us to live the life of heaven;
if we have it not, we lack these powers and therefore will be totally unable to live the life of heaven.
Frank Sheed
from A Map of Life 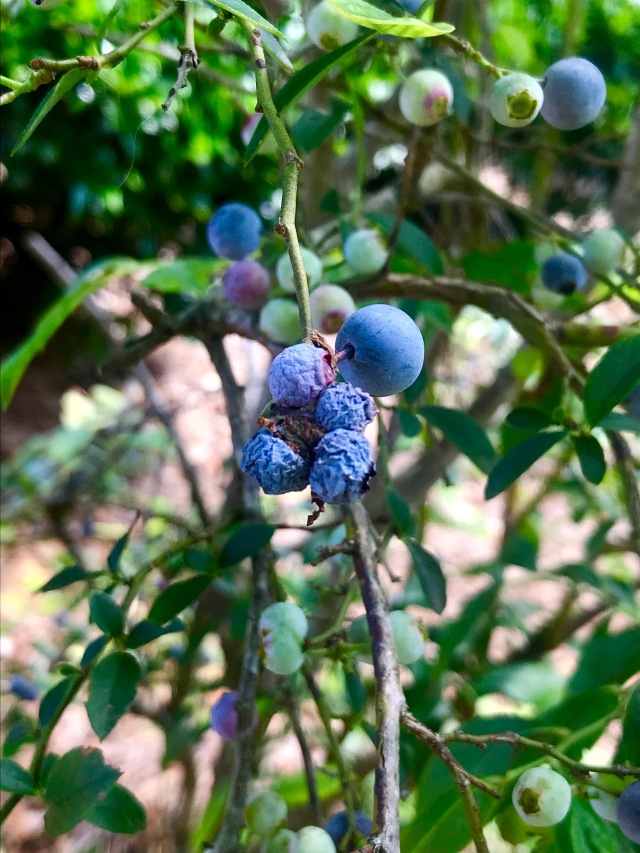 As in the blueberries…
they need to be literally left to the birds!

Both life and time have gotten the better of me so when I walked out this morning in
an attempt to unburden the blueberry bushes I was met with what Bourbon Street smells
like the morning following a Sugar Bowl game for the National title.

There’s that cloyingly and sickly sweet, very overpowering scent of fermentation…
as in the berries are simply overripened and now fermenting…
fermenting on the ground, on the bush…you name it, they’re fermenting…

Those that are overly ripe have simply fallen to the ground which is now covered with
all manner of crawling, biting, stinging things searching for their share of a sweet
rotting juicy treat.

The birds are actually landing in the bushes, with me right there in plain sight, as they
are now so drunk from having gorged on fermented berries that they give me a no never mind.
I merely duck.

Me who is just trying to find the remaining salvageable berries.

Those berries that are not bursting at my mere touch due to being so swollen from the
copious amount of rain as of late have left me smelling like I’ve been on a three day
drunk.

The other berries are simply so small and hard that they are not worth the trouble since
they will never truly ripen.

The mercury was sitting right at 90 with the humidity being nearly the same…
And it was still well before the noonday hour.

I got what I could, overwhelmed by the rest so I simply threw my hands in the air and said
out loud for no one in particular…let them just go to the birds!!!

Much in the same way that I want to say to all those working ever so fast and furious at
creating our current state of hysteria…hysteria that is coming out of our oh so
post-Christian, uber progressive, rabid dog culture.

A couple of troubling things…

The first is obviously the recent fact that a person went into a restaurant to eat…
and because of who her boss just so happened to be, was asked to leave.

She didn’t go to push an agenda, she wasn’t on the clock, she wasn’t “representing” as so
many these days like to say…
She was just trying to enjoy a meal at a place I’m sure she has either visited before
and liked or was with someone who had previously eaten there and recommended it.

And so she left…along with those in her group.

They offered to pay for what they had ordered but were told that would not be necessary.

The owner claims that several on her staff are gay and that was why they wanted her to leave
because her boss made them feel uncomfortable and, I’m assuming, they, in turn, felt hostile
toward her simply for simply being associated with him.

Not that any of them actually even knew her or him…they’ve just assumed the worst.

And let’s remember, this gal’s boss wasn’t even there…
it was just a gal with a group of family and friends who wanted to eat
and enjoy, what I’m thinking, would have been a good meal.

That’s a troubling storm cloud upon our horizon.

Many folks are comparing this incident to the bakery who, due to religious convictions,
declined to make a wedding cake for a gay couple.

Of which blew up into a nasty lawsuit which became the shot heard around the nation…
It was a lawsuit that, in the end, graciously went in the favor of the bakers.
Yay for being able to still have religious conviction in the good old US of A.

The gay couple had actually gone way out of their way to use this particular baker.
They knew upfront how things would most likely turn out when they actually could have
used many other nearby bakeries they would most likely have been more than willing
to accommodate their wishes.

The owner of the bakery is a Christian who views same-sex marriages as an affront to
a sacred God-ordained union.
I happen to agree, but I am digressing.

That incident was based on a religious conviction.

Getting booted from a restaurant because of one’s boss, well that is troubling in
a completely different direction which has nothing to do with one’s
religious convictions.

Next, there was a troubling mention made in yesterday’s post with the link to one of
David Robertson’s, aka The Wee Flea’s, post.

In a nutshell, David tells us that Vicky’s book is about her coming out as openly gay
and how she is claiming to be actually a victim of the Christian Chruch…
so now her’s is a push for what is being dubbed as Gay Christianity.

So obviously gone now are the days of sinfulness or of upholding God’s word and tenants to man.
Because of all those sorts of things are now considered to be some sort of bullying
which produces a sense of victimization.

Yep, you read correctly…living life opposed to God’s commands is liberating because
living under those commands is to live a bullied life resulting in victimization.

Who makes this kind of thinking up???…really, I want to know….because I want
to avoid them at all costs.

A person in the UK had ticked the like button on David’s post and someway or other that simple
the action of “liking” David’s post put this person on a watchdog Governmental list…a list
of those who are being labeled as “homophobic” which, if I am not mistaken,
is now considered a hate crime in the UK.

So to disagree with homosexuality, believing that such a lifestyle runs counter to God’s word,
is to be homophobic and guilty of a hate crime.

Let that sink in a minute.

You are a Christian, or a Jew, or a Muslim for that matter, who believes that because
of your religious convictions,
you believe homosexuality goes against the word of God and is perceived
as a sin…. and so now you are labeled homophobic and are guilty of a hate crime.

I would laugh but the fact of the matter is that that is pretty darn frightening.

This lunacy has got to stop!
Because it is absolutely ridiculous.
As in…. it is all strictly for the birds…

Yet the question remains….when and how…when and how will all of this madness end?

But we know that in the end, come what may, we of Fatih know…
we know that yes these earthly battles will rage,
yet blessedly the Victory has already been secured.

Do not be conformed to this world,
but be transformed by the renewal of your mind,
that by testing you may discern what is the will of God,
what is good and acceptable and perfect.
Romans 12:2