When it comes upon me how late I am trying to serve the Church,
the obvious answer is, even saints, such as St. Augustine, St. Ignatius,
did not begin in earnest till a late age.
Blessed John Henry Newman 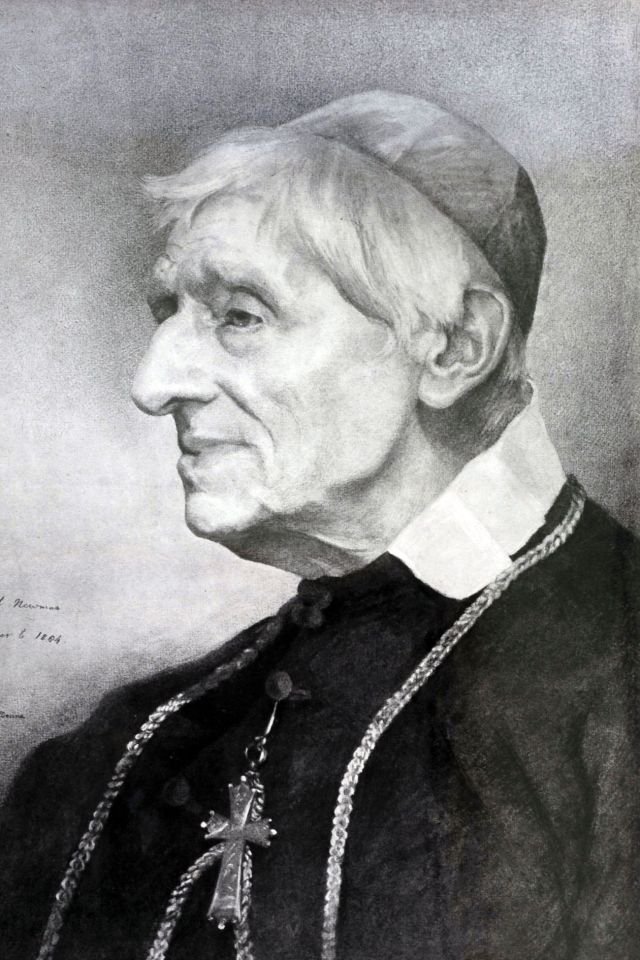 To those of you who are non-Catholics, this news is no more than a blip from some
religious news feed, but to me, I find it quite interesting.

As many of you reading this already know, I was born and raised in the Episcopal Church—
which is, in a nutshell, the American branch of the global Anglican communion.

Anglican being the Chruch of England.

A denomination I once loved, but for many years have found myself at a crossroads of odds.
I have found that I cannot remain in a fold that disregards the Word of God while
preferring to re-write God’s tenants to suit a disgruntled liberal culture.

John Henry Newman was an Anglican priest, writer and intellectual who was considered
‘an evangelical Oxford University academic.’

He too felt at odds with his “church.”

According to Wikipedia,
He [Newman] became known as a leader of, and an able polemicist for the Oxford Movement,
an influential and controversial grouping of Anglicans who wished to return to the
Church of England many Catholic beliefs and liturgical rituals
from before the English Reformation.

In this, the movement had some success.

In 1845 Newman, joined by some but not all of his followers,
officially left the Church of England and his teaching post at Oxford University
and was received into the Catholic Church. He was quickly ordained as a priest and
continued as an influential religious leader, based in Birmingham.
In 1879, he was created a cardinal by Pope Leo XIII in recognition of his services
to the cause of the Catholic Church in England.
He was instrumental in the founding of the Catholic University of Ireland in 1854,
although he had left Dublin by 1859.
CUI in time evolved into University College Dublin, today the largest university in Ireland.

Newman came to his faith at an early age.

At the age of 15, during his last year at school,
Newman was converted, an incident of which he wrote in his Apologia that it was
“more certain than that I have hands or feet”.
Almost at the same time (March 1816) the bank Ramsbottom, Newman and Co. crashed,
though it paid its creditors and his father left to manage a brewery.
Mayers, who had himself undergone a conversion in 1814,
lent Newman books from the English Calvinist tradition.
It was in the autumn of 1816 that Newman “fell under the influence of a definite creed”
and received into his intellect “impressions of dogma, which, through God’s mercy,
have never been effaced or obscured”.
He became an evangelical Calvinist and held the typical belief that the
Pope was the antichrist under the influence of the writings of Thomas Newton,
as well as his reading of Joseph Milner’s History of the Church of Christ.
Mayers is described as a moderate, Clapham Sect Calvinist,
and Newman read William Law as well as William Beveridge in devotional literature.
He also read The Force of Truth by Thomas Scott.

Although to the end of his life Newman looked back on his conversion to
evangelical Christianity in 1816 as the saving of his soul,
he gradually shifted away from his early Calvinism.
As Eamon Duffy puts it, “He came to see Evangelicalism,
with its emphasis on religious feeling and on the Reformation doctrine of
justification by faith alone, as a Trojan horse for an undogmatic religious individualism
that ignored the Church’s role in the transmission of revealed truth,
and that must lead inexorably to subjectivism and skepticism.”

According to a news article on the Washington Post,
Pope Francis on Sunday will canonize John Henry Newman,
a Victorian-era intellectual, Catholic convert and cardinal.
A self-described “controversialist,” Newman was an early leader in the Oxford Movement,
an attempt to reinstate ancient forms of faith and worship in the Church of England.
After converting to Catholicism at age 44,
Newman went on to found a Catholic university and a religious community,
as well as a school, and he clashed with authoritarian,
or “Ultramontane,” Catholics over the issue of papal infallibility.

Newman called liberalism “false liberty of thought,”
or the attempt to find truth through reason alone independent of faith and devotion.
He characterized his life as one long campaign against this view in his spiritual autobiography.

A theologian, poet and priest of the Church of England,
Newman found his way to Catholicism later in life and was ordained a
Catholic priest in his 40s.
Pope Leo XIII made him a cardinal in 1879.

Cigna, a global health service company,
surveys feelings of social isolation across the U.S. using the UCLA Loneliness Scale.
Last year Cigna released the results of a study of 20,000 Americans.
It found that adults 18 to 22 are the loneliest segment of the population.
Nearly half report a chronic sense of loneliness.
People 72 and older are the least lonely.

I spend a lot of time with young adults in my job,
and the results don’t surprise me.
I often observe young couples out on dates, looking at their cellphones rather than each other.
I see students walking while wearing earbuds, oblivious to passersby.
Others spend hours alone watching movies on Netflix or playing videogames.
The digital culture in which young people live pushes them toward a kind of
solipsism that must contribute to their loneliness.

“No one, man nor woman, can stand alone;
we are so constituted by nature,” Newman writes,
noting our need to cultivate genuine relations of friendship.
Social-media platforms like Facebook and Twitter connect people,
but it’s a different sort of connection than friendship.
The self one presents on Facebook is inauthentic,
someone living an idealized life unlike one’s daily reality.
Interaction online is more akin to Kabuki theater than genuine human relations.

When young people do connect face to face, it’s often superficial,
thanks in part to dating and hookup apps like Tinder and Bumble.
Cigna’s study found that 43% of participants feel their relationships are not meaningful.
Little wonder, if relationships are formed when two people decide to swipe right on their phones.

Cardinal Newman never married, but warm, sincere, and lasting friendships—the kind that
we so seldom form through digital interactions—gave his life richness.
He cultivated them with his neighbors in Oxford and, after his conversion to Catholicism,
at the Birmingham Oratory. He sustained them in his correspondence,
some 20,000 letters filling 32 volumes.

In one of his sermons, delivered on the feast of St. John the Evangelist,
Newman reflects on the Gospel’s observation that St. John was “the disciple whom Jesus loved.”
It is a remarkable thing, Newman says, that the Son of God Most High should have loved
one man more than another.
It shows how entirely human Jesus was in his wants and his feelings,
because friendship is a deep human desire.
And it suggests a pattern we would do well to follow in our own lives if we would be happy:
“to cultivate an intimate friendship and affection towards those who are immediately about us.”

On the other hand, Newman observes that “nothing is more likely to engender selfish habits”
than independence.
People “who can move about as they please, and indulge the love of variety”
are unlikely to obtain that heavenly gift the liturgy describes as
“the very bond of peace and of all virtues.”
He could well have been describing the isolation that can result from
an addiction to digital entertainment.

When Newman was named a cardinal in 1879, he chose as his motto
Cor ad cor loquitur.
He found the phrase in a letter to St. Jane Frances de Chantal from St. Francis de Sales,
her spiritual adviser:
“I want to speak to you heart to heart,” he said.
Don’t hold back any inward thoughts.

That is a habit of conversation I hope we can revive among our sons and daughters.
Real friendship is the cure for the loneliness so many young people feel.
Not the self-referential stimulation of a cellphone or iPad;
not the inauthentic “friending” of Facebook; not the superficial hooking up of Tinder,
but the honest, intimate, lasting bond of true friendship.
Mr. Garvey is president of the Catholic University of America.

“Lead, Kindly Light, amidst th’encircling gloom,
Lead Thou me on!
The night is dark, and I am far from home,
Lead Thou me on!
Keep Thou my feet; I do not ask to see
The distant scene; one step enough for me.
I was not ever thus, nor prayed that Thou
Shouldst lead me on;
I loved to choose and see my path; but now
Lead Thou me on!
I loved the garish day, and, spite of fears,
Pride ruled my will. Remember not past years!
So long Thy power hath blest me, sure it still
Will lead me on.
O’er moor and fen, o’er crag and torrent, till
The night is gone,
And with the morn those angel faces smile,
Which I have loved long since, and lost awhile!
Meantime, along the narrow rugged path,
Thyself hast trod,
Lead, Saviour, lead me home in childlike faith,
Home to my God.
To rest forever after earthly strife
In the calm light of everlasting life.”
John Henry Newman