You desire that which exceeds my humble powers,
but I trust in the compassion and mercy of the All-powerful God.
Saint Stephen 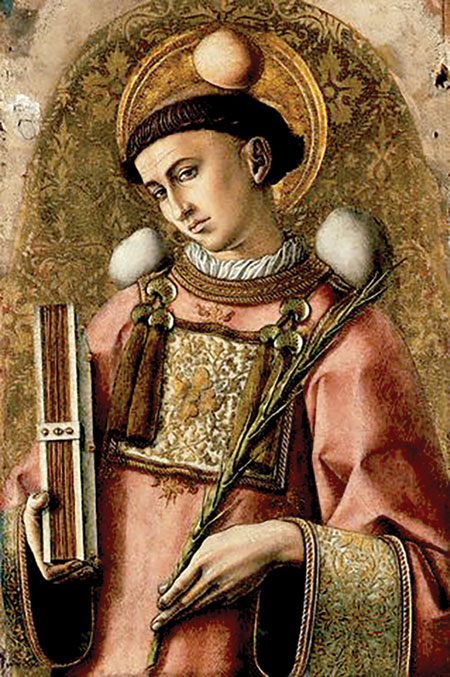 (portion of the Demidoff Altarpiece 1476 / The National Gallery / London, England)

In the Acts of the Apostles, St. Luke praises St. Stephen as
“a man full of faith and the Holy Spirit,” who
“did great wonders and signs among the people”
during the earliest days of the Church.

Luke’s history of the period also includes the moving scene of Stephen’s death –
witnessed by St. Paul before his conversion –
at the hands of those who refused to accept Jesus as the Jewish Messiah.

Stephen himself was a Jew who most likely came to believe in Jesus
during the Lord’s ministry on earth. He may have been among the 70 disciples
whom Christ sent out as missionaries, who preached the coming of God’s kingdom while traveling with almost no possessions.

This spirit of detachment from material things continued in the early Church,
in which St. Luke says believers “had all things in common”
and “would sell their possessions and goods and distribute the proceeds to all,
as any had need.”

But such radical charity ran up against the cultural conflict between
Jews and Gentiles, when a group of Greek widows felt neglected
in their needs as compared to those of a Jewish background.

Stephen’s reputation for holiness led the Apostles to choose him,
along with six other men,
to assist them in an official and unique way as this dispute arose.
Through the sacramental power given to them by Christ,
the Apostles ordained the seven men as deacons,
and set them to work helping the widows.

As a deacon, Stephen also preached about Christ as the fulfillment of the
Old Testament law and prophets. Unable to refute his message,
some members of local synagogues brought him before their religious authorities,
charging him with seeking to destroy their traditions.

Stephen responded with a discourse recorded in the seventh chapter of the Acts
of the Apostles.
He described Israel’s resistance to God’s grace in the past,
and accused the present religious authorities of “opposing the Holy Spirit”
and rejecting the Messiah.

Before he was put to death, Stephen had a vision of Christ in glory.
“Look,” he told the court,
“I see the heavens opened and the Son of Man standing at the right hand of God!”

The council, however, dragged the deacon away and stoned him to death.

“While they were stoning Stephen, he prayed, ‘Lord Jesus, receive my spirit,’”
records St. Luke in Acts 7.
“Then he knelt down and cried out in a loud voice,
‘Lord, do not hold this sin against them.’
When he had said this, he died.”

The first Christian martyrdom was overseen by a Pharisee named Saul –
later Paul, and still later St. Paul –
whose own experience of Christ would transform him into a believer,
and later a martyr himself.