The biggest human temptation is to settle for too little.
Thomas Merton

I posed a question yesterday…
or actually… A.W. Tozer posed the question…

And maybe that’s two question in one…

However…
in that simple question lies the cusp of everything…
everything in a compact little nutshell.
The true bottom line.

This is a question about one thing and one thing only.

With the only sole issue in the question, which is of relevant importance, is simply Jesus Christ.

Yet when all of that which is superfluous is finally pushed aside,
when the dust is settled
and the last breath of contention is expended,
it is only Jesus Christ who remains….

All these other issues,
concerns,
battles,
questions….
are reduced but to one single thing…

“God spake His eternal Word in Christ Jesus the Lord,
so Christ has settled every question….”
Because everything stands or falls with Him—and Him alone…

(a paraphrase of thought based on A.W. Tozer’s The Crucified Life)

In that day you will no longer ask me anything. Very truly I tell you,
my Father will give you whatever you ask in my name.
Until now you have not asked for anything in my name.
Ask and you will receive, and your joy will be complete.
John 16:23-24

“We need the tonic of wildness, to wade sometimes in marshes where the bittern and the meadow-hen lurk, and hear the booming of the snipe; to smell the whispering sedge where only some wilder and more solitary fowl builds her nest, and the mink crawls with its belly close to the ground.”
Henry David Thoreau 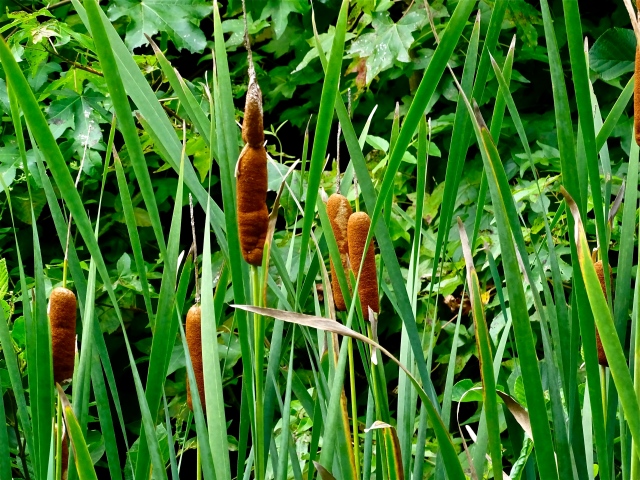 Nothing says lazy, tranquil and idyllic like a swaying patch of Typha latifolia, otherwise known as the common cattail. Nestled along the edge of any pond, creek or swampy culvert, cattails are the telltale sign of any sort of shallow standing water. Cattails stand erect, as if at attention like an army of brown little torches, they can be found growing all around the globe in or near any swampy or marshy environment.

The greek word for marsh is typha–which is most fitting for the cattail as it is truly a prolific marsh plant, that to some, is perceived as an invasive noxious weed. It is also from the word typha that we get the word typhoid—a disease spawned from fetid waters.

The cattail, often referred to as the corn dog plant, is a fast spreading tall massing plant whose leaves can grow upwards of 10 feet.
The brown “cat tail” which sits atop a long slender stalk is the “flower” of the plant.
The plant spreads either by the myriad of seeds released along the autumn winds as the brown cattail begins to breakdown or throughout the deceptively fast spreading rhizome root system. A cattail only needs shallow waters, keeping its feet wet, in order to thrive.

According to Green Deane, a naturalist and forager, cattails are edible and were even being considered by the US Army as a chief source of starch for American soldiers by the end of World War II. Cattails contain more starch than rice, potatoes or taro root. A flour made from the roots can be used in recipes just as one would use wheat flour.

Deane is the author of several books, as well as an online website and newsletter, educating readers as to the fine art of foraging for those edible wonders found in fields, glens and deep within the woods.

Deanne notes that anyone finding themselves lost and in need, who comes upon a patch of cattails, has everything he or she may need to survive– a source of fuel, a source of food, and a source or shelter.

You can read more about the common cattail, finding recipes and much more on his website:
“Eat the Weeds and other things too”
http://www.eattheweeds.com