Psalm 1
Blessed is the man who walks not in the counsel of the wicked,
nor stands in the way of sinners, nor sits in the seat of scoffers;
but his delight is in the law of the Lord,
and on his law he meditates day and night.

He is like a tree
planted by streams of water,
that yields its fruit in its season,
and its leaf does not wither.
In all that he does, he prospers.

The above photo is of an altar located in the beautifuly quaint and very tiny chapel located within the botanical enclave known as Callaway Gardens. The chapel is located in the middle of a beautiful nature park situated in middle west Georgia, surounded by endless virgin woods, rhododenrens, a gently cascading waterfall, and a lovely small lake—representing the epitome of solitude. 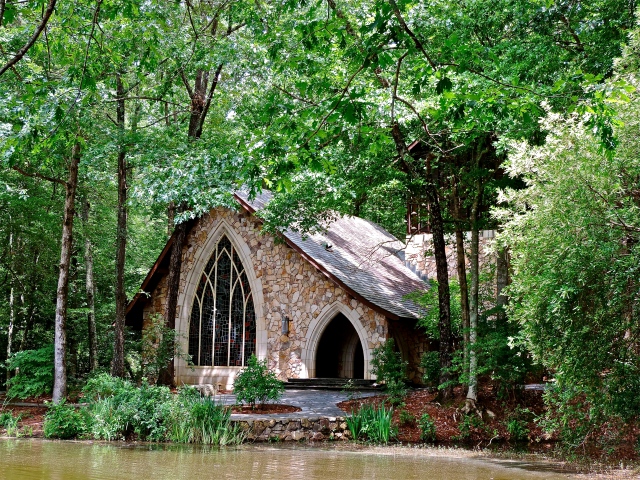 The bible that was resting on the rock slab altar was open to the book of Psalms—one of my most favorite books of the Bible–as I so often relate to the angusih, the lamentations, the cries, the shouts, the triumphs, the joys—the wealth of emotions that make up these poetic songs. So naturally I thought I should mirror what was in the picture—Psalm number 1

And perhaps the whole two path thing was most appropriate for the location—I had come upon this tiny chapel, tucked away in the middle of a forest, by way of a wooded path. There was another path that lead away from the chapel, out around the tranquil lake whose still waters beautifuly refelcted this delightful respite from the world.

This was the kind of place that I could live—isolated, quiet, peaceful, tranquil…nothing but the sounds of the gentle waterfall, the croaking of the bullfrogs, the buz of the cicadias…..the gentle breeze brushing against my skin. But alas, it is not where I live—it’s not where many of us live. When I often find such a spot and wistfully mention that I could live in such a spot, my husband always quips “you’d get tired of it and bored”……would I? Hummmmm…maybe I’d like to give it a test try to see if that would be the case….

I had brought friends here who were visiting from England–she from Germany, he from Finland. I hope they too found the setting and the moment most rewarding and tranquil. Somehow I doubted it compared with anything in Finland, or any place in Barvaria…but to me, this little Georgia girl, this was beauty par excellence—-

Today’s Psalm reminds us that life is all about choices—in this case the choice being the walking on one path or that of another path. One path is about following the Law, which in this case is the Law of God. The other path remains to those who chose not to follow God’s Law. The idea of dried up chaff, just blowing away in the wind, only to become dried up dust is not very appealing. I like the idea of being planted by lovely streams of water—something like where this chapel sits.

God is gracious and a gentleman—always yeilding to our whims and desires. He’s not pushy, never wishing to force anything on anyone–it’s all a matter of choice—a simple choice. It does all seem so simple doesn’t it?—path A or path B—and yet this world is in such a terrible mess—which leads me to think the latter path is quite full—I want to follow on the former path—the first path, the one where I’m not walking in the counsel of the sinnful and wicked.

In order to do so, once again, I’ve got some choices—God’s choices for me and my life, or the world’s choices. When put this way, it all seems so simple—then why in the heck do we, do I, make it so hard and difficult?! It shall be my goal to focus on my choice of the right path—it’s a life long work but I tend to believe, most worth it………..