“Above all, don’t lie to yourself.
The man who lies to himself and listens to his own lie comes to a point
that he cannot distinguish the truth within him, or around him,
and so loses all respect for himself and for others.
And having no respect he ceases to love.”
Fyodor Dostoevsky, 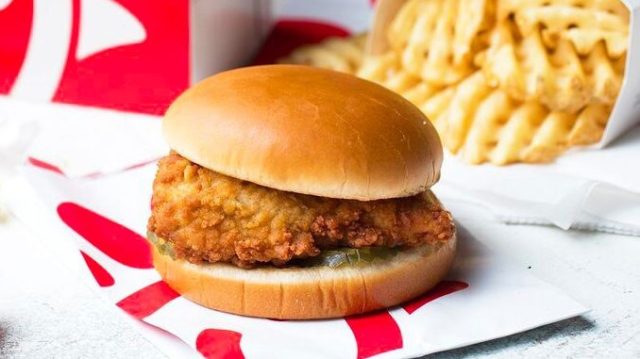 Well, I knew it would be coming…and come it did.
It came yesterday with a new post by our favorite,
formerly from across the pond and now from down under, pastor David Roberston.

David has waded into the proverbial Chicken war.

It is rather the war of words regarding Chick-fil-A and the news over
whether or not the Chicken sandwich giant is distancing themselves from their
Christian charities…
those being The Salvation Army and the Fellowship of Chrisitan of Athletes.

The question raised on this little blog the other day was whether or not the news
was correct in their reporting over such or was Chick-fil-A still very much a contributor
to those particular Christian organizations.

Some say an adamant yes while others continue with their doubts.

Firstly, I should clarify that David is not new to this issue as he wrote a post a
few weeks back regarding the closing of the first Chick-fil-A franchise in the UK—
closing due to the mounting protests of the LGBTQ community as they perceive
the chicken sandwich franchise as being hostile to their varying communities.

That hostility being found in the fact that CFA stands by the Godly principle that
marriage is between one man and one woman–
a Biblical principle that the LBGTQ community finds both repugnant and offensive.
And they will not rest until all businesses and individuals abide by their view
and their view only.

“But this is no joke.
It is an important and revealing issue.
Little did I realise that when I wrote about the intolerance faced by Chick-Fil-A recently –
praising their heroic stance –
that a month later I would be writing about their capitulation to that same intolerance.”

Although Chick-Fil-A have stated that their decision has nothing to do with giving
into political correctness, very few people believe that.
I suppose it could just be a ‘coincidence’ that they have dropped the charities
they have been condemned for supporting, and ended up supporting charities that
their critics endorse – but is it likely? It’s disappointing to watch a Christian company
not only give in to the bullies, but then seek to spin their way out of the criticism.

I wrote David to let him know that a fellow blogger,
whose husband owns and operates a Chick-fil-A here in the states,
wanted to set the record straight and reported that the news outlets had gotten
it all wrong.

David responded that it was not the news agencies who first offered the story but rather
Chick-fil-A itself by announcing their shift in charitable giving—the news merely reported
the story after the fact.

So now we have more confusion.
A conundrum of sorts.

I had later offered up a bit of a retraction to my original post after being informed that
I had perhaps had the wrong information and thus hoped to quell what was now
believed to be misinformation.
I wrote about the issue of truth and false news…but it seems
that we are still searching for the elusive facts.

I personally hope that Chick-fil-A will decide to address this mounting criticism
and questioning by setting the record straight as this issue has now taken
on a global slant.

Hoping to lay low and staying under the radar is comfortable but
we must be mindful and constantly aware that the progressive left is quick to smell
doubt and waffling…they will readily pounce when given any opportunity.

Are we, therefore, willing to take a stand for our Biblical principles or do we prefer to
keep the status quo of safety while choosing the path of least
resistance toward appeasement?
A path that lessens our faith, whittling it away until it is no longer the
faith of the Great I AM but something else entirely?