“In moments of exaltation one expressed sentiments that outstripped
one’s spiritual capabilities by a vast span; and she knew well that
unless God is sought for Himself alone, with a selflessness
of which she was at present incapable,
He is not to be found.”
― Elizabeth Goudge 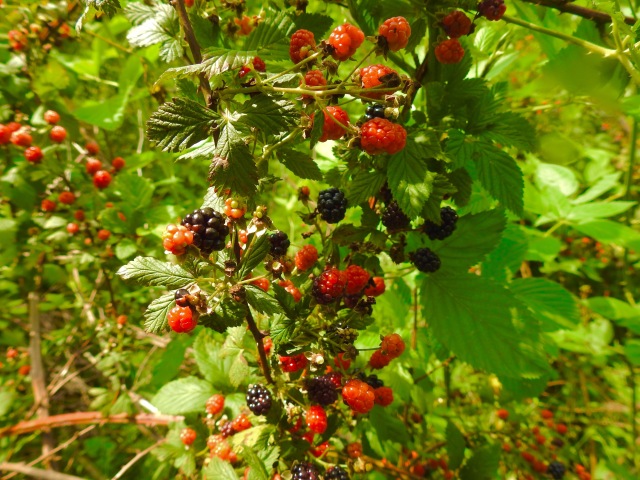 I go to great lengths when it comes to seeking out, and subsequently picking,
those glistening seasonal black and blue ripening gems…
those succulent orbs and globes of juicy blueberries and now
the incoming crop of wild blackberries.

I have been known to go to near daredevil feats in order to fill a basket, bowl or bag
with these precious little beauties.
I have braved chiggers, ticks, snakes…as well as bleeding to death due to digging deep
into the proverbial briar patch.

This obsessiveness over berry picking worries my husband.

He seems to believe that I do not possess the gift of lithe or grace when it comes to say,
walking…let alone standing on my head while reaching deep into a thicket of the unknown
in search of the elusive black or blue jewel.

I think it comes down to the fact that he’s going to hold that broken ankle business
against me for the rest of my non broken life.
It wasn’t my fault I fell in a drain hole while putting out the pine straw that spring…
a hole he’d dug out just days prior and failed to fill back in before I stepped in it.

So when I must balance on a narrow brick wall,
while leaning over as far as I can with one foot planted on the ledge while
the other leg is sticking straight out behind me in some sort of yoga like pose…
all the while as I’m reaching as far as I can
without face planting into a mass jumble of branches,
fruit and leaves…
well, I don’t know what the fuss and worry is all about.

I mean, I watch for the snakes, bees and ants.
I try my best not to fall, really I do.
I can’t help that I’ll be covered with red whelps the following day that will itch like
nobody’s business…
I can’t help that I scream the word “STOP!!” when we’re happily and quietly driving down
a road in the middle of nowhere when I suddenly spot a lovely ripening bramble bush
along the side of said deserted road… beckoning to be picked.
He likes the pies and cobblers…so what’s all the the big worry???

So naturally while I was reaching and digging deep buried up to my elbows in stickers,
all during the throws of my berry seeking session yesterday,
oh so busy about the task of finding and picking…
I was stuck by a startlingly similarity between my hyper focused quest in seeking
the elusive hiding fruits—the object of an almost obsessive determination, and
the lengths to which I know God goes when He wants, nay yearns, to seek out and
eventually find….us….

As we have the tendency to hide, always painstakingly out of arms reach…and
yet a loving God painstakingly seeks his own…
for He will go to even much greater and even more daring lengths in His quest for us
than dare say I do over a mere berry….

And boy how grateful I am that He does!