You get tragedy where the tree, instead of bending, breaks.
Ludwig Wittgenstein 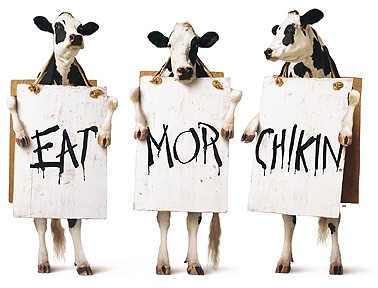 ******Since writing this post, Lynn Abbott, whose husband owns and operates a
Chick-fil-A has reached out to me to set the record straight—
that the recent news regarding Chick-fil-A
is not the full truth…
Chick-fil-A is not cutting ties with The Fellowship of Christian Athletes and
The Salvation Army
Please read Lynn’s comment in the comment section and please see my following post
that includes Lynn’s informative clarification!

I’ve written many a post over the years in support of Atlanta’s local homegrown and crowd
favorite, bovine inspired, chicken sandwich shop–Chick-fil-A.

Those amusing and much beloved illiterate cows, who constantly
encourage folks to “eat mor chikin”, have helped to turn a once lone little restaurant,
on the outskirts of Atlanta, into a national institution.

The creation of the ‘original chicken sandwich, a restaurant,
lovingly dubbed the Drawf House, along with a sound Christian foundation were each
contributing factors that helped to turn one man’s small dream into a booming business.

The late Truett Cathy and his desire for feeding bodies, as well as spirits,
helped turn a dream into a business that is now ranked as one of the nation’s top
fast-food chains.

Mr. Cathy, a devout Christian, build his food empire on Biblical principles.
Even stating that the Bible was his “playbook” for operating.
With the foremost operating decision being that his restaurants close on Sundays,
the sabbath day for the Christian church.

With the Sabbath being that proverbial 7th day of Creation, of which is to be a day of
rest and worship, Cathy fought the mounting demands of an ever-growing
secular population to let go of an archaic notion and open his restaurants
7 days a week…
‘Just think of all the business, and in turn revenue, you’re missing out on’
folks would say…
But we know, just as Cathy knew,
that God will bless and honor those who bless and honor Him.

Cathy always refused the demanding pushback to his decision to close on Sundays
as it would allow his employees the opportunity of attending church with
their families should they so choose…
Just as it afforded Cathy the ability to honor God by marking the Sabbath as “holy.”

Since his death in 2014, his sons, who now own and oversee this mega food corporation,
have remained faithful to their father’s original guiding principals…
that is until…this week.

Those original guiding principles, those principles of traditional Christian values,
have been sorely tested over the past couple of years by an ever-increasingly rabid,
post-Christian, liberal society.

With the most recent example being the closing of Chick-fil-A’s first
franchised restaurant in the UK due to mounting protests from the LGBTQ_ _ _
(add in any other letters that you chose that I’ve forgotten)
community and its supporters over the fact that the Christian based foodchain
does not support same-sex marriage while it offers donations to various charitable
organizations that share their same Christian values and beliefs—
organizations such as The Salvation Army.

The very organization founded on Methodist Christian principles in 1865
that has grown to be one of the largest global organizations to rush in to offer
aid and comfort to those ravaged by natural disasters or simply by hard times.
As taken from Wikipedia, the Salvation Army was formed as it
“sought to bring salvation to the poor, destitute, and hungry by meeting both
their “physical and spiritual needs.”

And so now Chick-fil-A is painfully discovering that it is no longer acceptable,
or better yet not tolerated, to disagree with something that the “left” readily endorses.
Just as it is no longer acceptable to support any charitable Christian organization that
shares the belief that marriage is a sacred union between one man and one woman,
or the desire to honor God’s words…let alone honoring any other Christian value.

Because if you do, you will be marginalized and maligned until you bend.

And so this week, the house that Cathy built, built on the foundation, words,
and promises proclaimed by the God of all Creation, caved in to the pressures
of a maniacal society.

And thus, the cows have been brought to their knees, bending.
Bending the very core ideals once instilled by their founder all in order to appease
an ever-increasingly intolerant society.

Genuflecting to the secular god of sexual perversion as such is now seen as the new normal.

And yet we’ve all known of this bending for quite some time have we not?

We’ve known, as we’ve painfully watched, that if anyone disagrees with a
radicalized society, any and all will be forced to agree or will either be
shut down or better yet, destroyed.

For when one decides to bend in hopes of forging a compromise…
hoping that that bend, that compromise,
will be enough to ward off the ideological demagogues…
it will become deadly and readily apparent that the rabid masses will not be appeased…
not until everyone in opposition not only bends but are more aptly broken.

Shame on Chick-fil-A.
They don’t even realize that their willingness to distance themselves from their
once strong allied charities, that being The Salvation Army and the Fellowship of Christian Athletes—
their willingness to bend away from their once deeply rooted Christian principles will eventually
and most sadly lead to their demise…
becoming but a mere shadow of Truett Cathy’s original desire to honor God.

This is what the Lord has commanded.
If a man vows a vow to the Lord, or swears an oath to bind himself by a pledge,
he shall not break his word. He shall do according to all that proceeds out of his mouth.
Numbers 30:2

Fear the LORD your God, serve him only and take your oaths in his name.
Do not follow other gods, the gods of the peoples around you;
for the LORD your God, who is among you, is a jealous God and his anger will burn against you,
and he will destroy you from the face of the land.
Do not put the LORD your God to the test as you did at Massah.
Be sure to keep the commands of the LORD your God and the stipulations and
decrees he has given you. 18 Do what is right and good in the LORD’s sight,
so that it may go well with you and you may go in and take over the good land
the LORD promised on oath to your ancestors, thrusting out all your enemies before you,
as the LORD said.
In the future, when your son asks you,
“What is the meaning of the stipulations, decrees and laws the LORD our God has commanded you?”
tell him: “We were slaves of Pharaoh in Egypt,
but the LORD brought us out of Egypt with a mighty hand.
Before our eyes the LORD sent signs and wonders—great and terrible—on Egypt and Pharaoh
and his whole household.
But he brought us out from there to bring us in and give us the
land he promised on oath to our ancestors.
Deuteronomy 6:13-23