The very idea of a bird is a symbol and a suggestion to the poet. A bird seems to be at the top of the scale, so vehement and intense his life. . . . The beautiful vagabonds, endowed with every grace, masters of all climes, and knowing no bounds — how many human aspirations are realised in their free, holiday-lives — and how many suggestions to the poet in their flight and song!
John Burroughs, Birds and Poets, 1887 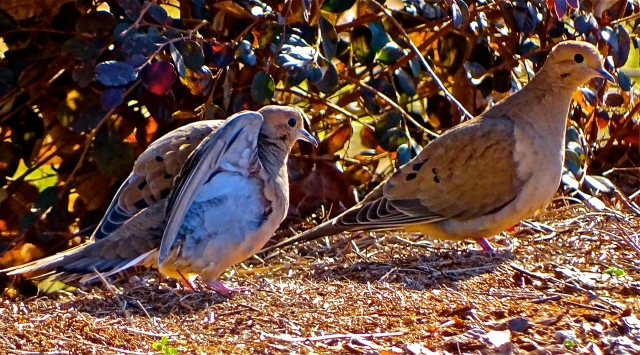 Just as with some people we see, the advice holds true with certain animals and birds. . .
sometimes it’s better not to ask but to merely go on about one’s business. . .shaking a head as you go is certainly permissible.

Luckily however these two mourning doves weren’t up to any funny business, I just happened to snap the camera in mid ruffling of feather and wing.

I do so greatly enjoy watching these birds, along with the bevy of fellow winged creatures who call my yard home. There’s just something blissfuly cathartic about spending time, merely observing the fastidious behavior of these feathery neighbors. Whereas the doves are not prone to fly up to the feeders as the other birds, rather preferring to graze about the ground underneath the feeders gobbling up any seed or corn that is carelessly dropped, their waddling and jutting of their heads is often a comical sight. 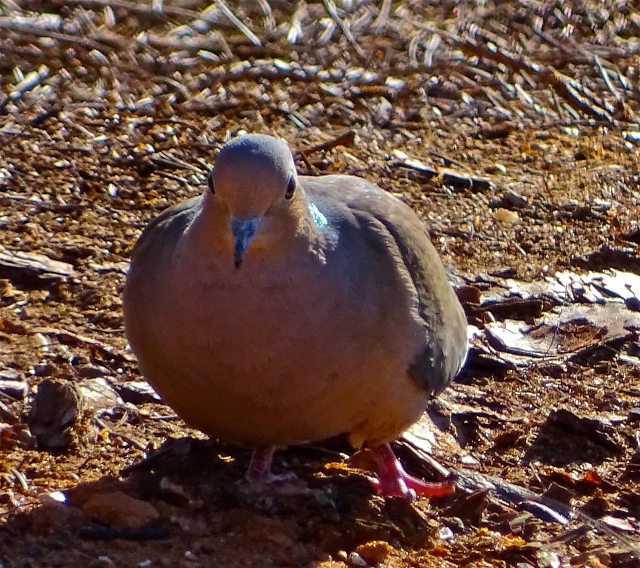 I was not aware of the rather peculiar phenomenon of doves, as well as pigeons, of actually producing their own milk. It is a milk of sorts produced in their crops known simply as crop milk. Just prior to the laying of eggs, the female dove stops eating, setting into motion a chain of physiological events trigged by the body reacting to the panic of starvation. This being the time when the body produces the milk, which in turn is what the mother dove feeds her new hatchlings.

It is because of this peculiar maternal sacrifice which has forever linked the dove as being a symbol of motherhood and all to that which is maternal.
Who knew!!??

And as to our Mourning doves earning their rather sombre and reverent name,
we may merely look to the Roman poet Virgil.
Taken from one of his early eclogues and quoted here from wikipedia, we have one of the earliest references to the humble dove and to its most mournful sound.

“Its plaintive woo-OO-oo-oo-oo call gives the bird its name, possibly taken from Virgil’s First Eclogue, (lines 57-59 translated from the Latin as follows):

“Yonder, beneath the high rock, the pruner shall sing to the breezes,
Nor meanwhile shall thy heart’s delight, the hoarse wood-pigeons,
Nor the turtle-dove cease to mourn from aerial elm trees (nec gemere aeria cessabit turtur ab ulmo)
Here the Latin verb gemo, gemere, gemui, gemitum signifies “to sigh, groan; to coo; to sigh or groan over, lament, bemoan” 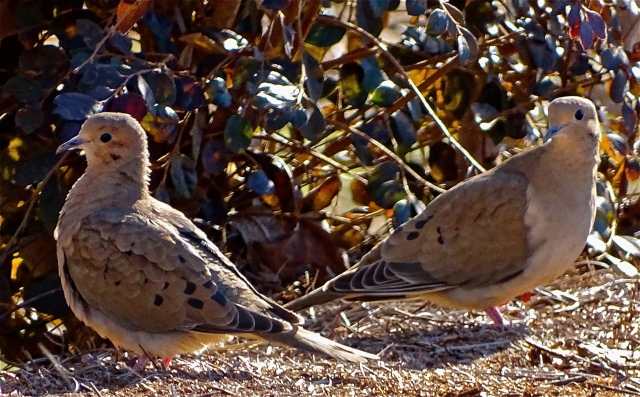 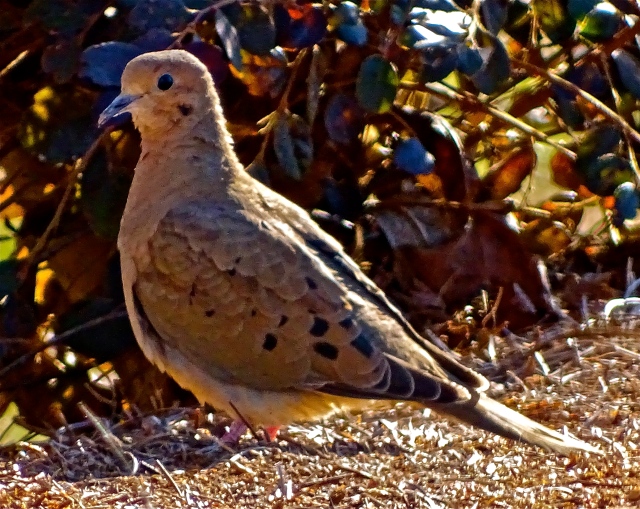