Yesterday we peeled 11 lemons and added the peels (minus the white pith) to 3 cups
cognac and 3 cups brandy…and let it steep for 24 hours.

And thus we’ve gone from this on Monday… 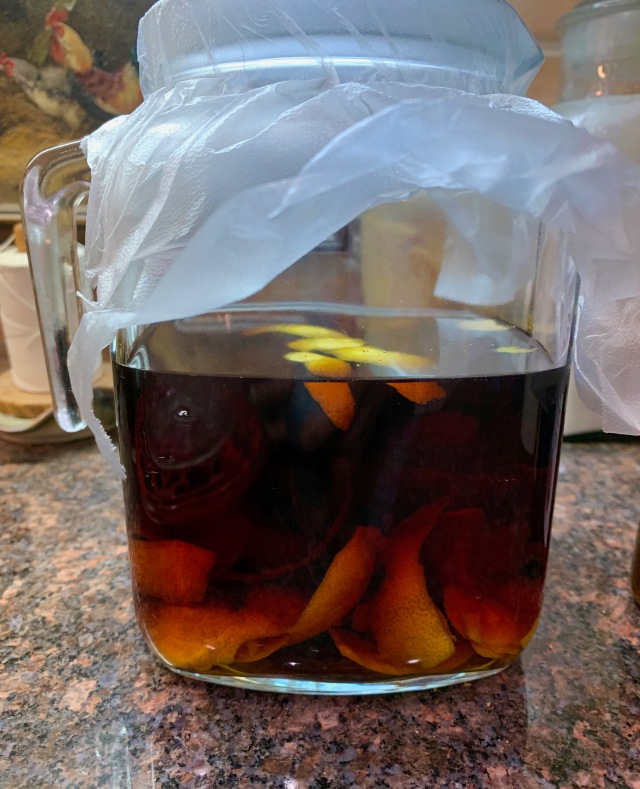 To this on Tuesday… 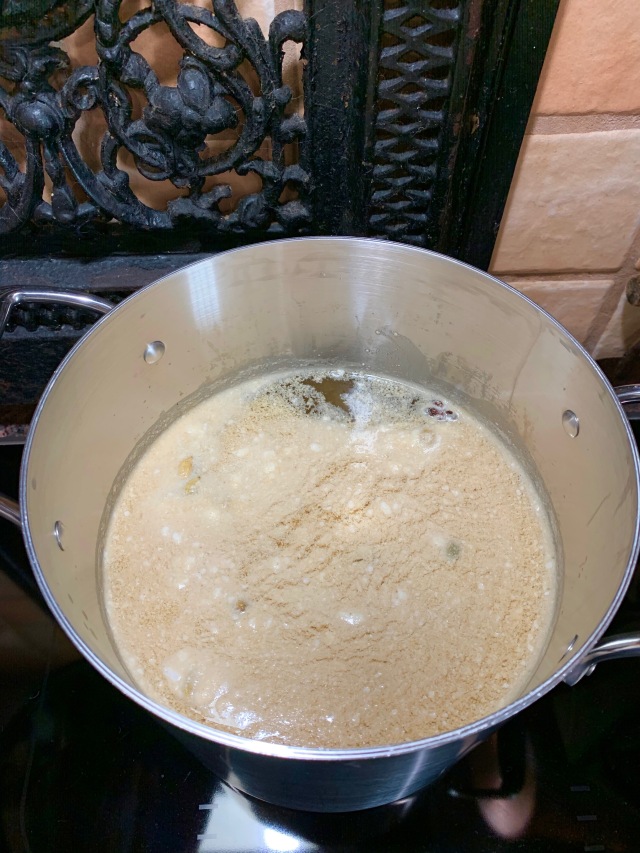 A curdled heady aromatic pot of who knows what.

Waiting for about 2 hours, I next poured the coagulated mess through some cheesecloth
and a fine-mesh strainer.

After staining, the remaining liquid will be moved to the fridge where it will sit for
another 24 hours, allowing any remaining “curds” to settle.
After sitting and settling, I’ll strain the liquid through a coffee filter.

Benjamin Franklin used a jelly bag…or so said the recipe he’d
handwritten and shared with a friend.
Aren’t handwritten recipes great?
They just keep getting passed around…albeit it spotted, yellowed and torn.

I don’t know what a jelly bag is and thus, doubt I own one…
hence the coffee filter and cheesecloth.

I did previously add to this putrid looking mess some cardamon pods, a single star anise,
a broken cinnamon stick, a fully grated nutmeg along with 2 cups of lemon juice,
1 1/2 cups of sugar, 4 cups of water and 4 cups of boiling milk…

All resulting in the curdled mess now staring up at us from the pot.

I dared to taste it, stealing a small spoonful this morning.

It’s pretty boozy as well as heavy on the lemon.
Maybe too lemony—

I was hit with a taste of bitterness but of course,
that was before I added the sugar, water, and milk.

I’m beginning to think that 11 lemon peels and 2 cups of juice may have been all of
a bit of an overkill.

But Ben said to do it and so I did.
How can I argue with the man who wrote Poor Richard’s Almanac?!

The sampling I had tasted down at the beach had been made with pineapple.
Since I’m not a huge pina colada, tropical drink kind of fan, I stuck to Ben’s original recipe
and opted not to introduce any pineapple.

I did deviate slightly however and threw in a few cardamon pods.
I like cardamon as it reminds me of a warm Fall cozy evening.
I also sprinkled in some cinnamon along with the broken stick as I like a heavy dose of
cinnamon in my Fall goodies.

I’m now wondering if adding a vanilla pod might have been a nice touch.

As you can see in the picture below, the curds were caught in the cheesecloth…

The strained liquid, which is still rather cloudy and reminds me of apple cider, will sit
for a day or so before it goes through more filtration.

The taste is spicy, warm, and again, very boozy…but in a soft sort of way.

We’re off to see the Mayor and Sheriff tomorrow so the final presentation will have to wait
a day or so longer— but trust me…
we’ve come this far and by gosh, we will have an official presentation if it kills me…

And let’s hope that drinking this stuff won’t…kill me!

And I suppose that there might be some of you wondering why in the heck I would go
to such trouble just to make a simple drink…or more aptly, a most complicated drink?!

Or maybe it’s in part because it’s something that harkens back to a
different day and time.

It takes us back to a time when taking one’s time was appreciated.
It was a time when taking the time to do something that was somewhat painstaking
and was in turn, shared with others,
was equally appreciated as both a product and a preparation.
There is a deep sense of satisfaction in that.

It harkens to a time when we didn’t take everything for granted…
knowing that we could simply run out to a store and buy what our tastes might
be yearning for…
As in there were no grub hubs or uber eats back then.
The work from our hands filled our needs and wants and thus that was where our satisfaction
was found.

It was a time when things like lemons and spices were not readily available.
So when you could find them, afford them, they were savored and relished.

And thus savoring and relishing while feeling a sense of accomplishment and gratitude
is certainly reason enough…or at least it is for me.
And since it is indeed Fall…there’s no better time for slowing down,
savoring and reflecting upon some past simple pleasures.