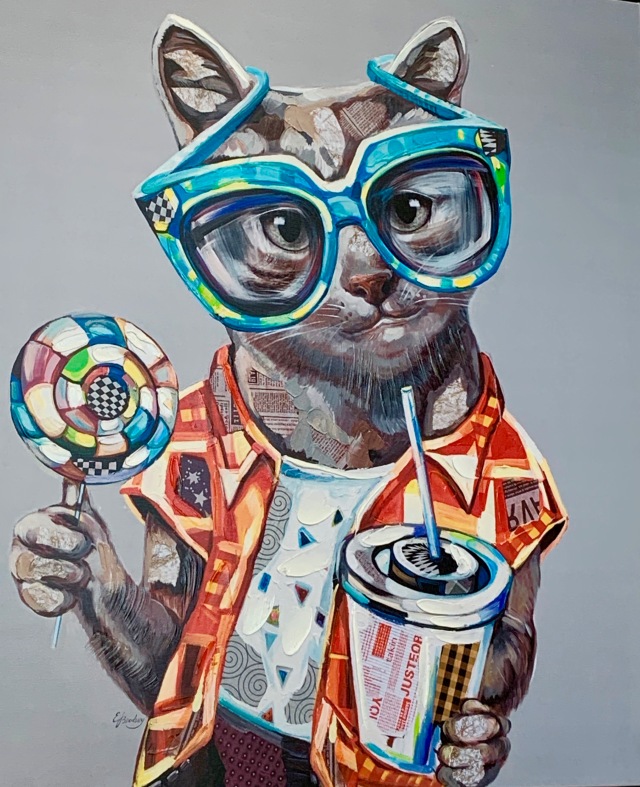 This is a painting in one of our vet’s exam rooms.
Percy and I are still visiting the vets now every other day as there has been one more last-ditch
effort to close up his wound and now he dons a cone daily.

When I asked about the painting/ collage,
they told me that their office manager had picked up most of the art and photographs gracing the walls at
a hobby store.

Meaning that the painting and photographs were not exactly unique but rather products of mass
merchandizing.

And so naturally when I saw this particular image the song The Cool Kids came straight to mind…
but in this case, the word ‘kids’ was replaced with the word ‘cats’…
as in this was obviously a “cool cat” as in a song lyric as
“I wish I could be like the cool cats”

As I read today’s quotes by both St. Therese of Lisieux and St. Augustine regarding prayer…
what prayer is…what makes prayer effective, etc…
I thought of this business of unique vs mass marketing;
I thought of mainstream and what our culture considers to be ‘cool’–as in
our current pop world, what it is to be in sync with the culture gods, and that which
is not “cool.”

Prayer, Christian prayer, is not cool.

Prayer, be it said privately and individually or en masse by a gathering in public,
has been under fire now for decades.

As the scrutiny, the irritation, the perceived wrong affected by those
who pray upon those who find it repugnant, is growing by leaps and bounds.

And we should note that this is only directed at Chrisitan prayer as no one is asking
Muslims not to publically call followers to pull out a prayer rug and bow towards Mecca throughout the day.

So what is it about Christian prayer that has the masses up in a dither?

What is it that is so offensive about those who offer the Christian prayer of intercession,
thanksgiving, healing, etc…while no one is finding the same offense when hearing the minnuetes
sounding the call to those who demonstratively stop work or schooling in order to bow
toward Mecca 5 times daily?

This is a most perplexing anomaly?

“For me, prayer is a surge of the heart; it is a simple look turned toward heaven,
it is a cry of recognition and of love, embracing both trial and joy.”
St. Therese of Lisieux

“Prayer is greatly aided by fasting and watching and every kind of bodily chastisement.
In this regard each of you must do what you can.
Thus, the weaker will not hold back the stronger, and the stronger will not press the weaker.
You owe your conscience to God.
But to no one else do you owe anything more except that you love one another.”
St. Augustine, p. 143
An Excerpt From
Augustine Day by Day

What does love look like? It has the hands to help others. It has the feet to hasten to the poor and needy. It has eyes to see misery and want. It has the ears to hear the sighs and sorrows of men. That is what love looks like.
Saint Augustine

“It is said that once upon a time St. Kevin was kneeling with his arms stretched out in the form of a cross in Glendalough. . . As Kevin knelt and prayed, a blackbird mistook his outstretched hand for some kind of roost and swooped down upon it, laid a clutch of eggs in it and proceeded to nest in it as if it were the branch of a tree. Then, overcome with pity and constrained by his faith to love all creatures great and small, Kevin stayed immobile for hours and days and nights and weeks, holding out his hand until the eggs hatched and the fledging grew wings, true to life if subversive of common sense, at the intersection of natural process and the glimpsed ideal, at one and the same time a signpost and a reminder. Manifesting that order of poetry where we can at last grow up to that which we stored up as we grew.”

This kindly tale of St Kevin and the blackbird, as told by Seamus Heaney, is a tale of which legends must be made as it goes well beyond our modern comprehension of the probable or even the possible.

That a man, caught up in the rapture of deep prayer, could or would be so very still that a bird would light upon his hand in which to lay her eggs…then out of his sweeping concern, compassion and love for all of God’s creatures, particularly for this blackbird and now for her eggs, knew his task was to remain as still as possible until the eggs hatched and the baby birds could fly away on their own.

Poppycock and fairytales….
Far fetched myth and lore…
A sweet little tale for the naive and gullible…

Yet is that simply the single point we are to glean from this sweet little story…
a tale of unbelievable feats carried out all because of a deep abiding love…
or….
…is there more….
as in much much more…?

Perhaps this tale is but a reminder…
A reminder that we have been offered Love…
A great, vast, forgiving and consuming Love….

And the amazing thing about all of this is that we are actually the object of that Love.
We were actually created out of that Love.
So it should come as no surprise that we are to, in turn, exhibit and convey that same Love
to any and all we encounter along our way…
Because within that Love resides a Power so deep and so strong that it is greater than any power known on Earth…
That should we both acknowledge and honor that Love, there would be no limit to what that Love through our faith and actions could accomplish…

Perhaps it is the likes of St Kevin, as well as the countless other believers throughout the ages whose amazing acts of selflessness, as well as superhuman feats, is what is rooted deep within the abiding and almost naive belief that this very Love is capable of truly the unbelievable….