“I love people who make me laugh. I honestly think it’s the thing I like most, to laugh.
It cures a multitude of ills.
It’s probably the most important thing in a person.”
― Audrey Hepburn

“If we couldn’t laugh we would all go insane.”
― Robert Frost 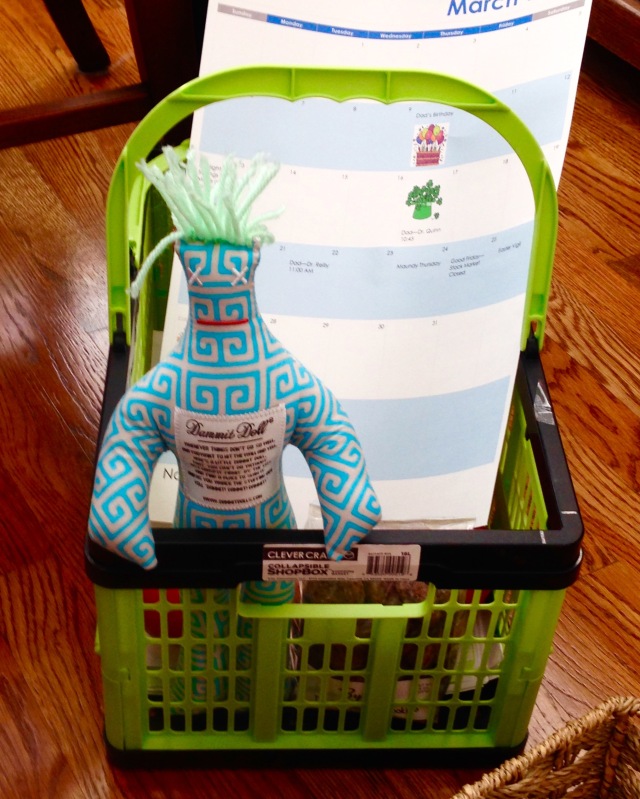 (Gloria ready to head over to dad’s)

So today, Gloria the dammit doll and I had to travel over to Dad’s.
I still can’t get over the coincidence of Gloria the dammit doll having the same name as my stepmother—what are those odds?!
Anywhooo, our week is a bit off kilter as we’ve had to deal with life here on the homefront, which in turn has put us off track for our weekly pilgrimage, or two, or three or four…you get the point, to Atlanta.

It was going to be a busy trip…
There were to be groceries to buy, bills to pay, visits to banks, trips to doctors, and a visit with dad’s tax folks…it is that time of year you know…

So…as Gloria was driving us over to Atlanta early this morning, she’s spies something with her wee eye….

A groundhog, frolicking along the side of the interstate catches Gloria’s eye…

“Well, this must be our lucky day” remarks Gloria.
What are the chances of seeing a groundhog playing alongside the interstate?? she exclaims….
The sun is popping out here and there from behind the sea of remaining storm clouds, north Georgia is experiencing snow showers while we’re doing good to keep the car between the lines in the gale force winds, but if Gloria thinks today’s our luck day, who am I to rain on her parade?!

When we get to Dad’s we meet the new caregiver…one of these two Gloria’s gathered near me keeps running them off, I’m not naming names but Gloria the dammit doll is off the hook…
and so far things seem ok.

Dad is sitting in his chair, the one I sometimes wonder if he’s not glued in to…but I notice he’s not completely dressed—as in his pants are on, but the shirt isn’t tucked in, the belt isn’t fastened, nor are the pants.
“Hi Dad, what’s up with your pants?”
“Oh, uh, uh, they just won’t stay together.”
“Dad, I just bought you three new pair, where are they?
Oh, uh, uh, they’re back there, uh, uh, I don’t need them.
Suuuuureee you don’t…

Long story short, it seems Dad’s colitis is acting up—which happens every time things in that house become chaotic…
Of which they certainly have over the past month or so….as in all hell has been breaking loose, hence why Gloria the dammit doll has had to work really hard on overtime….and dad isn’t keeping his pants zipped, buttoned or belted as he’s running back and forth to the bathroom. Have you ever seen a very feeble 88 year old, who lists dangerously to the right, attempt to hurry to the bathroom—puts new meaning into scary viewing.

The caregiver fills me in on the latest trauma dramas.

The main bathroom, the one my stepmother uses, has been the crime scene for her last two catastrophic falls. Each time she has managed to wedge herself up against the door, preventing help from getting to her. Subsequently she has been emphatically told by the nurse, the doctor, the care service, her son, the EMT’s, Dad, me… to allow the caregivers to assist her in and out of the bathroom and not to lock nor completely shut the door.

Defiant to the end, the door has remained locked tight despite the cries of those imploring from the other side she open up the door.
So on Sunday her son removed the door.
(Shades of having a teenager…just a really old teenager)
As in he lifted that sucker right off it’s hinges and carted it off to the basement.
Replacing the door with a rather chic little curtain job, giving way to an air of a day spa happening in my stepmother’s bathroom. Easy and breezy in a fab chic sort of way.

My stepmother had become unglued prior to the door’s removal…
As in raging, manic, irate, irrational, hateful, threatening…you name it… as in it might be time to call in reinforcements.
Hence why Dad now has colitis…again.

A visit to the doctor earlier this week, along with some tweaking of dementia meds, and there is actually peace and clam at the house today….odd and frightening at the same time

Gloria the dammit doll looked at me as we both wondered if we were in the right house.

Yet Dad was anything but peaceful..he was troubled…even fretful.
Quiet and agitated at the same time.

When my stepmother had to leave to go get the staples removed from her head…those staples from her latest catastrophic fall in the bathroom…of which shattered the mirror, which she had fallen into…cutting herself to shreds…the result of defiant stubbornness as in I won’t use the walker, I won’t allow help, as in I will lock doors….but I digress…
I stayed behind with dad, at the house, just to figure out what was troubling him…
as if I didn’t already have my suspisions.

He has worked himself back into a full blown sick tizzy of worry… and no matter the reassurance, the emphatic explaining on my part, he was hearing none of it…he was back to being a dog with a bone—a bone that is used up and no good.
He obsesses…to a very dangerous and unhealthy level–welcome to his dementia.
We couldn’t get lucky and have two with the same sort of dementia—nope–we’ve got to do battle on multiple fronts.

So I’m now wondering how best to help–
I’ve lined up a trip to the gastroenterologist.
I’ll be emailing the nurse for suggestions.
We may, God forbid, have to cut out his sweets and chocolate….
and I will keep my fingers crossed that my stepmother will now rest in this period of bizarre calm in order that dad’s guts can also get to a place of calm…

For life at Dad’s is anything but calm…as in, when it rains, it will indeed pour….and I usually won’t be holding an umbrella…

So finally late this afternoon, while Gloria the dammit doll was driving us back home, she poses a question my way…

She mentions that maybe she should try her luck at a dammit doll dating match site.
She’s been working herself to death as of late, as in working overtime between both dad and my stepmother…
Maybe it’s time I get her a helpmate.
She had actually seen a fellow in a store front window when she was on a recent visit to Savannah..a fellow who she thought was really pretty cute…yet she was afraid to approach him.

I had seen him as well, sitting there in that window with those big brown eyes, but I told her that he was not her type.
I explained to her that he appeared to be nothing more than a smooth talker and totally full of crap.
I promised her that once we got back home later in the day, I’d go on-line in search of a Mr. Dammit doll…one that she could call her own…

Well, I’ll keep you posted as to who shows up to ask Gloria the dammit doll out on a date…
Kind of reminds me of those long ago mail order brides…I just hope he’s not a Russian…not that I’m opposed to Russians mind you but I would like one who speaks the language.

Until then…it seems Gloria has had a day of it and needs a little rest….

A joyful heart is good medicine, but a crushed spirit dries up the bones.
Proverbs 17:22

*****It should be noted that my cheeky approach in this situation of life with my dad and stepmother leaves me in tears more oft than not—-so there are times, such as today’s post, in which I’ve got to reach for the humor when there is strength to do so… otherwise my spirit would indeed break and dry up–
Tending to them and their needs, maintaining their world as peacefully as possible.. for both of them… requires finesse, the patience of Job, stamina, sanity and a steady hand—doing it alone is none too easy. It often leaves my own world, home, family upside down and pulling the short straw.
Those of you out there who face similar situations of caring for aging and elderly parents..those with both physical as well as emotional and or mental needs..know how very difficult life can be.
Alzheimers and dementia are not kind.
Hence why Gloria the dammit doll has made these bad days a bit more tolerable 🙂