“May it be a light to you in dark places,
when all other lights go out.”
J.R.R. Tolkien 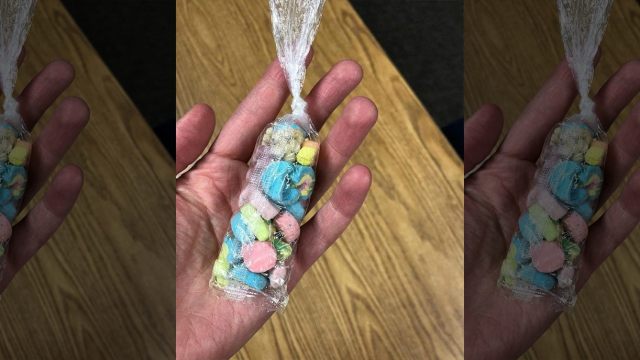 I have a small confession…
When it comes to cereal, of which I rarely eat, I love Lucky Charms.

I’ve loved it ever since I was little…
or rather ever since the cereal’s inception in 1964.

And if the truth be told, I’ve been known to secretly buy a box every now and then,
when I should have been buying something like Multigrain Cheerios or some other healthy
cardboard nuggets.

Have you ever eaten a bowl of Lucky charms, as the milk
turns an odd swirling muddied color from all those magically melting delicious marshmallows…
in turn, turning up the bowl while finishing off that last bit of sweetened milk?
Mmmmmmmmmm

My mother, for reasons beyond my soul, would never buy the cereal I wanted, that being
Lucky Charms or Raisin Bran.
She claimed the Raisin Bran upset our stomachs…something about too much bran
but back then the thought of fiber was not a thing and as far as the Lucky Charms
was concerned, to this day, I don’t know…
she just always tried appeasing my brother with that awful Captain Crunch.

So when I saw the following image of a tiny bag of Lucky Charms marshmallows being
offered as a humble Christmas gift, my attention was piqued.

And by the time I finished reading the story, my eyes were so full of tears that I could
barely see from crying almost uncontrollably.

It seems that Rachel Uretsky-Pratt, who is an elementary teacher in Washington state,
received a rather unusual gift from one of her students.
But rather than just being an unusual gift, the small present was about the most genuine,
selfless and sincere form of giving that I’ve seen in a very long time, if ever.

“You see, 100% of my school is on free/reduced lunch.
They also get free breakfast at school every day of the school week.
This kiddo wanted to get my something so badly, but had nothing to give,” she continued.
“So rather than give me nothing, this student opened up her free breakfast cereal this morning,
took the packaging of her spork, straw, and napkin, and finally took the time to take
every marshmallow out of her cereal to put in a bag – for me.”

To help put your life into perspective:
Today was the last day before our winter break.
We will have two weeks off to rest with our families and loved ones over the holidays
then head back to school in 2019.

With it being the day before break and Christmas right around the corner,
most teachers bring their kiddos something such as books or little treats and occasionally
in return receive something from their students.
Today I received some chocolates, sweet handmade notes, some jewelry,
but these Lucky Charm marshmallows stood out to me the most.

You see, 100% of my school is on free/reduced lunch.
They also get free breakfast at school every day of the school week.
This kiddo wanted to get my something so badly, but had nothing to give.
So rather than give me nothing,
this student opened up her free breakfast cereal this morning,
took the packaging of her spork, straw,
and napkin, and finally took the time to take every marshmallow out of her cereal
to put in a bag—for me.
Be grateful for what you have, and what others give you.
It all truly comes from the deepest parts of their hearts.
Happy Holidays. 💕

And he sat down opposite the treasury and watched the people putting
money into the offering box. Many rich people put in large sums.
And a poor widow came and put in two small copper coins, which make a penny.
And he called his disciples to him and said to them,
“Truly, I say to you, this poor widow has put in more than all those who are
contributing to the offering box.
For they all contributed out of their abundance,
but she out of her poverty has put in everything she had, all she had to live on.”
Mark 12:41-44

Thus it is necessary to commence from an inescapable duality:
the finite is not the infinite.
Hans Urs von Balthasar

The spirit of man can endure only so much and
when it is broken only a miracle can mend it.
John Burroughs 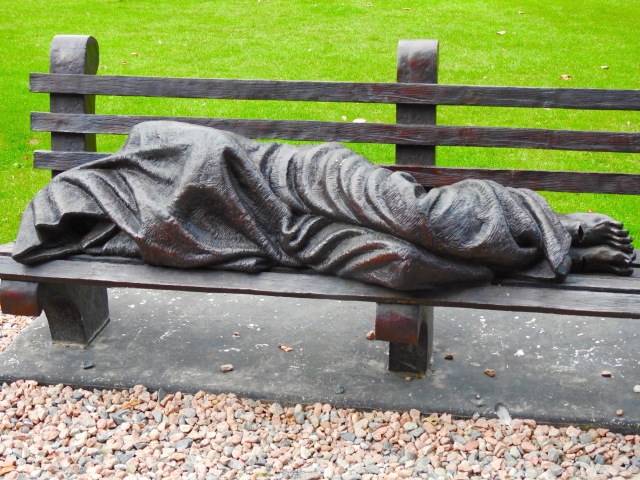 Tis the season to be merry and bright, happy and light, warm and fuzzy…
Christmas and Santa.
It’s all neatly rolled into one within the wrappings of December.
The giddy frivolity of a season which gives way to making merry while paying homage to the birth of a child.

Yet let us look more closely at a single word…

yet counter that with

One word divided into two of its variations, its various grammatical formations and contexts–each with very different meanings…

Christmas–the olde English—Cristes Maesse–or Mass of Christ
The sacred celebration of the Nativity or birth of Christ…the birth of the One proclaimed as the savior of mankind.

And then there is Christmas of the ho ho ho, jolly ol’ St Nick, the giving of gifts kind of Christmas…

With the introduction of Saint Nicolas, who evolved over time from a 3rd century Greek Catholic saint whose real life story of giving and providing paved the foundation for today’s more secular jolly older bearded, reindeer driving, present giving, hero of both young and old…Christmas the holy joined with Christmas the worldly, as the two became synonymous, joining as one.

And sadly today we see that the world of consumerism has run away with the latter of the two….creating part of our problem.

One word’s united meaning, the celebration of the birth of Christ, as well as the season of Santa and the giving of gifts….
Yet today the word is painfully becoming estranged, polarized and oh so sadly divided.

The Christian faithful throughout the ages have always had a wonderful way of melding traditions taken form the various seasons and times of the year from their various cultures and countries, coupled with the more traditional pagan / secular celebrations of those various countries and cultures, uniting and embracing all with their Christian teachings with the end result being those yearly holy observances which blend both the religious/ holy with secular celebrations.

Lest we forgot the story from the other week regarding the celtic cross…
As St Patrick used the circle around the traditional latin cross as a bridge between the Celtic worship of the sun–uniting both sun and Son together…in turn creating the iconic Celtic Cross.

Yet mankind frustratingly always has had a knack for messing up, distorting and even destroying good intentions.
What was once a time affording all a collective remembrance of the young and less fortunate during a time which was also witness to the faithful’s remembrance of the birth of the Savior—has now tragically morphed into a self consuming monster of advertising, marketing, consumerism and a big business feeding frenzy of madness.

Couple that with the now secular overt political correctness war of words of holiday and winter celebration with the keeping of Santa, as that’s good for the economy, while in turn booting the holy Christ Child totally out of the picture as that has nothing to so with the economy….

Seems as if we greatly prefer material gifts and presents verses the one true gift of a Savior….

It is indeed a truly sad kettle of fish we have going on as law suits now abound where once stockings were hung by the chimney with care—
As the word Christmas is no longer welcomed or allowed to be associated with this “special” time of year… especially in our public governmental sector, schools, colleges, etc—
If it receives any sort of federal funding or assistance, than you can forget Christmas and the whole birth of Christ associated with it.

Lest we offend the Atheists, the Jews, the Hindus, the Muslims, the Satanists, the Wickens….who if the truth be told, buy and gather to give those “christmas” gifts…

A long long time ago when I was in elementary school, way back in the early 1960s…My school had a healthy mix of both Jewish and “Christian” kids.

When it came to Christmas, with our teacher bringing in the small tree for our classroom, as we excitedly and joyously made ornaments in order to decorate the small tree— ornaments which now poignantly hang on my own tree today, the excitement of one and all was palpable.
Names were drawn for the classroom secret santa party which culminated on the last day of school before the Christmas break.

Our teachers, in their infinite wisdom, did something great.
In addition to our classroom Christmas tree, we also had a classroom menorah. Our Jewish classmates would, for the eight days of Hanukkah, share with us their
“holiday” along with its traditions.

Excitedly each day of Hanukah we’d ooo and ahhh, as only kids in the innocence of wonder do, over the lighting of a single candle—hardly able to contain the excitement until all 9 candles were lit.
It was a reverent event and we appreciated as well as respected the importance that the lighting of those 9 candles meant and what that 8 day observance represented to our Jewish classmates… just as they appreciated our reverence for our classroom’s small nativity scene.

A marvelous teaching tool and key to helping our young minds understand, tolerate, respect as well as allowing us to develop an appreciation for one another’s spiritual customs.
As the spirituality within man is a key component to being human.

We loved hearing our classmates excitement as they shared with the entire class the receiving of each gift on the night prior during their familiy’s observation of the Festival of Light.

We were taught the dreidle song and would play for the chocolate coins while we in turn shared the various customs of Christmases form around the world…
As we would buy our Jewish classmates their secret santa gifts as they, in turn, would buy us ours—
Never was there any resentment, no forbiddance to the right to observe, share or worship, no jealousies, not animosity….but rather a collective joy found in the frivolity of a season so merry and bright, yet sadly now seemingly steeped in what has become the frivolous, the polarized, the secular, the forgotten, the worldly and the empty…. 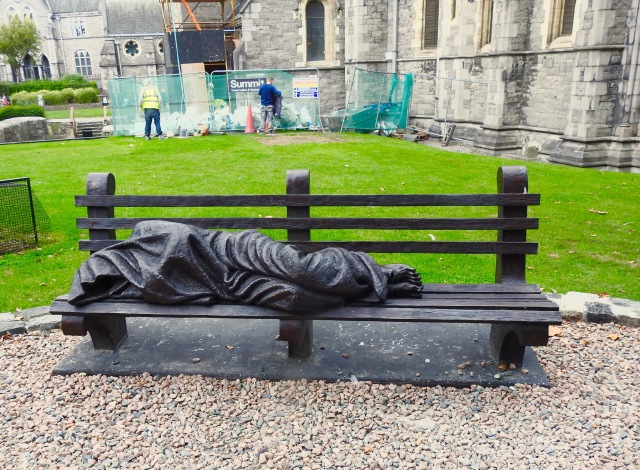 And there were shepherds living out in the fields nearby, keeping watch over their flocks at night. An angel of the Lord appeared to them, and the glory of the Lord shone around them, and they were terrified. But the angel said to them, “Do not be afraid. I bring you good news that will cause great joy for all the people. Today in the town of David a Savior has been born to you; he is the Messiah, the Lord. This will be a sign to you: You will find a baby wrapped in cloths and lying in a manger.”
Suddenly a great company of the heavenly host appeared with the angel, praising God and saying,
“Glory to God in the highest heaven,
and on earth peace to those on whom his favor rests.”