“I realize as never before that the Lord is gentle and merciful;
He did not send me this heavy cross until I could bear it.
If He had sent it before,
I am certain that it would have discouraged me…
I desire nothing at all now except to love until I die of love.
I am free, I am not afraid of anything,
not even of what I used to dread most of all…
a long illness which would make me a burden to the community.
I am perfectly content to go on suffering in body and soul for years,
if that would please God.
I am not in the least afraid of living for a long time;
I am ready to go on fighting.”
St. Therese of Lisieux, p. 122
An Excerpt From
The Story of a Soul 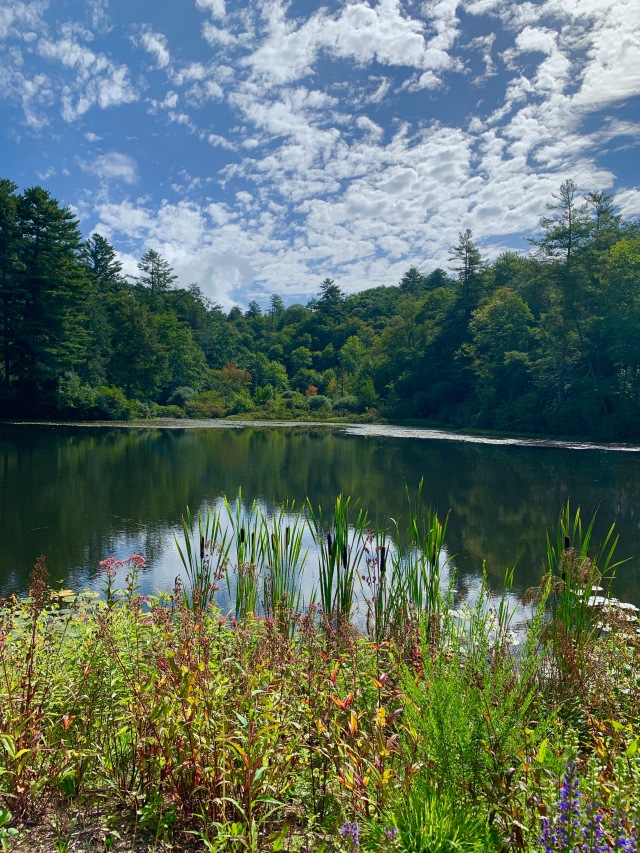 Close your eyes.
Breathe out slowly.
Feel the weight lifting…
ahhh the zen of life….HA!

Today’s image is that of a zenful moment.

And yet, there is no such thing of zen and life–
the two are simply incompatible.

We stepped away from life for a few days, headed northward about 2 hours toward
the North Carolina mountains…taking a belated anniversary get-a-way.

38 years of wedded bliss (cough cough) needed to be celebrated.
And the particular inn that we wanted to visit only had a first available
room about 2 weeks after the fact, so we took what we could get…
and thus off we went.

This escape came at a time when our nation was / is at a such a juxtaposition.
And yes, there is just oh so much to say…
so much dismay, so much pain, so much sorrow, do much disappointment, so much anger…

I looked forward to tuning out for a couple of days.
But how do you tune out the pain you feel for 13 families who just
lost their children, spouses, siblings because of a president who
is nothing but inept?

If you can do so, you have no empathy in your heart.

I am absolutely seething under the surface.
Disgrace does not speak strongly enough.

How in the world could a president have no clue?

We, the average US citizen, all knew that an attack was imminent,
we all received the notice via our various news outlets.
Heck, I received a push notification.
If I got it— if I get it…how come the President didn’t and still doesn’t?

An attack was coming and yet he sat back and basically waited.

So it appears that the deaths of those remaining service members
closing out our stay in Afghanistan could have been readily and easily avoided.
Throw in the 90 billion dollars worth of American war equipment that has been abandoned–
all of which could have been readily evacuated…
had there been a cohesive plan….but there was no such plan.

As a longtime educator, I totally get the concept of a cohesive plan.
I know all too well that how you finish is just as important as how you begin.
And yet sadly this administration does not comprehend such.

Stand down from a lengthy occupation…stand down from being in a place
much longer than we ever should have been…yes, by all means, stand down…
but to stand down without precision, order, or a well calculated plan…
well even we simpletons, call that pure negligence.

So off we went Saturday on our little trip all the while Afghanistan
swirled within both our thoughts… a sick heaviness lingered in the pit
of my stomach.
13 American service men and women were killed needlessly.
ABSOLUTLEY NEEDLESSLY!!

Add to this the hundreds of Americans, their Afghani partners, US babies,
and US military service dogs who are all now stuck behind enemy lines…
Yes– left stranded, Jen Psaki…as in stuck in harms way…no thanks to
our President.

And you can’t sugarcoat what will happen to those left behind.
Think torture, abuse and twisted delight in the demise of any
human or animal associated with the Americans…
but we don’t like to think about such…we don’t like the uncomfortable…
we don’t like that which makes us feel out of sorts.

Explain being out of sorts and uncomfortable to the families of those
Americans who are now hurting today over tremendous loss.

I will be the first to tell you that I agree with the fact that the
length of time we have spent in Afghanistan has been well past its prime.
Pulling out certainly needed to be, however, the manner in which we pulled out
should have been paramount.

Oh there’s just so much to chat about isn’t there?
However, today, time does not permit those lengthy sort of conversations.

Stand up my friends.
Time is not on our side.

The steadfast love of the Lord never ceases;
his mercies never come to an end;
they are new every morning;
great is your faithfulness.
Lamentations 3:22-23

“Life is not a continuum of pleasant choices, but of inevitable problems that call for strength, determination, and hard work”
Indian Proverb

A circle.
360º
No beginning.
No end.
Never stopping.
Never starting.
A continuum.

Very much like a cycle.
A repetition.
A loop.
A rhythm.
Over and over.
Constant.
Consistant.
Again and again and again.

Very much like the seasons.
Winter
Spring
Summer
Fall
One following always after the other.
Again and again.
Over and over.
A sequence.
Year after year.
Very much like life.

Not so however for our earth.
For the earth, and all that is in it,
shall pass away.
Because for the Earth,
there indeed was a beginning.
And therefore there will certainly be an end.
As in. . .
Decay
Demise
Destruction
Death

He, in turn, offers us a place in the continuum.
A place with Him.
As in, the adopted children of Grace.
Who may join their Heavenly Father.
But as a loving Father,
He offers a free choice . . .

Beginning
Life
Earthly death
Heavenly Life. . .
as in eternity
as in forever and ever and ever

As in a perfect continuum

Be patient, therefore, brethren, until the coming of the Lord. Behold, the farmer waits for the precious fruit of the earth, being patient over it until it receives the early and the late rain.
James 5:7 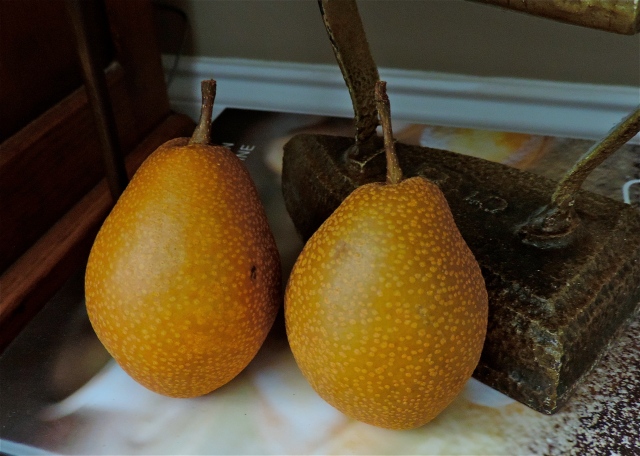 Some years the lone wild pear tree, perched deep in the woods, bears a bountiful crop. For what and for whom is uncertain as these are not the succulent pears of Anjou or Sekel. These are small hard bitter pears that neither deer nor raccoon will eat.

Other years this lone little tree yields but a single pear, perhaps two, maybe even three.
No matter whether there are baskets, or not, overflowing with fruit nor that the fruit is edible—the tree bears in both times that are lean and times that are plentiful.

The love of the masterful Creator, the omnipotent Father, equally bears a bountiful crop. At times it is a wonder as to what and for whom that bountiful love should be made available. Yet the crop is never exclusive nor sparse. The basket is open to any and all who may wish to reach in.

In times both lean and plentiful, the basket remains full. The harvest is always plentiful, yet those who choose to partake may often be few. The availability is never lacking. The basket overflows with a greater abundance than imaginable. The fruit is never bitter, always sweet.

However the time will come when the harvest and the season will draw to an end.
The abundance will wane.
The tree will be bare.
The basket will quickly empty.
Who will be left wanting
and
Who will remain full?