“A successful man (woman) is one who can lay a firm foundation with the bricks others have thrown at him.” (or her)
David Brinkley

Do you know Malala? Malala Yousafzai?
Malala is the young Pakistani girl who, on her way home form school last October 9, was shot in the head by the Taliban. In the extreme religious views of the Taliban, girls are not allowed to attend school. The various schools for girls, throughout certain areas of Pakistan, have been systematically victimized. The schools burned and acid thrown on the young female students. Actions sadly used as deterrents to learning and knowledge—all intended to eradicate the educating of generations of young girls.

If intimidation does not quell the desire to learn in the young girls of this muslim Taliban stronghold, then violence seems to be the rod of discipline of choice by the Taliban. Malala was returning home, on her school bus, when the bus was stopped by two men. A man boards the bus and asks “who is Malala?” Malala does not turn away as the other girls do attempting to avert eye contact with the gunman–Malala looks his way. At which point, 3 shots are fired directly at her young 15 year old head. 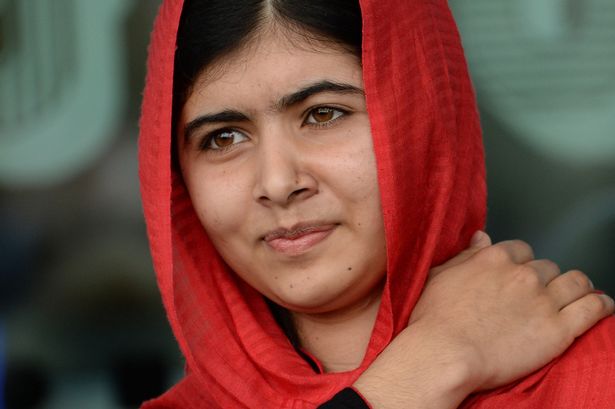 Malala was and continues to be an outspoken opponent of the Taliban and their skewed belief that girls should not be allowed to attend school or have the right to an education. It was her outspokenness and defiance that brought her the attention of the Taliban.

It is her miraculous survival, her recovery and continued perseverance to raise the battle cry for girls world wide that, yes, girls have every right to learn, to attend school, to be taught, to be successful, to attain their dreams and goals just as it is for boys which is what all seems to stir the ire of this malicious terrorist group. It is the raising and the continued carrying of this educational battle flag that keeps Malala on the dangerous radar of the Taliban as they have warned that they will indeed kill her yet.

Odd that a global terrorist organization of often masked thugs should be afraid of a 16 year old girl.

On October 11, the latest recipient of the Nobel Peace Prize will be announced from Oslo, Norway. The front runner for this year’s most prestigious award is 16 year old Malala Yousafzai.

Malala has taken the bricks of hatred and ignorance that were thrown at her and has in turn laid a firm foundation not only for herself but for all girls world wide–a brave foundation build upon hope and knowledge. On Friday I hope to hear Malala’s name announced as the youngest recipient of an award that has been awarded to such individuals as Mother Teresa, Martin Luther King, Jr., Nelson Mandela, Lech Walesa, Mikhail Gorbachev, Ellie Wiesel, Anwar Sadat, Menachem Begin, Desmond Tutu…to name but a handful…

Will you also dare to pick up the bricks of ignorance and build a foundation of hope and knowledge? Here’s to Malala and to all the young girls all over this planet who all have hopes and dreams……