He heals the brokenhearted
and binds up their wounds.
Psalm 147:3

“The indwelling Spirit shall teach him what is of God and what is not.
This is why sometimes we can conjure up no logical reason for opposing
a certain teaching, yet in the very depth of our being arises a resistance.”
Watchman Nee

“The dove descending breaks the air
With flame of incandescent terror
Of which the tongues declare
The one discharge from sin and error.
The only hope, or else despair
Lies in the choice of pyre or pyre-
To be redeemed from fire by fire.

Who then devised the torment? Love.
Love is the unfamiliar Name
Behind the hands that wove
The intolerable shirt of flame
Which human power cannot remove.
We only live, only suspire
Consumed by either fire or fire.”
T.S. Eliot, Four Quartets

From a certain point onward there is no longer any turning back. That is the point that must be reached.
Franz Kafka

We have come to a turning point in the road. If we turn to the right mayhap our children and our children’s children will go that way; but if we turn to the left, generations yet unborn will curse our names for having been unfaithful to God and to His Word.
Charles Spurgeon 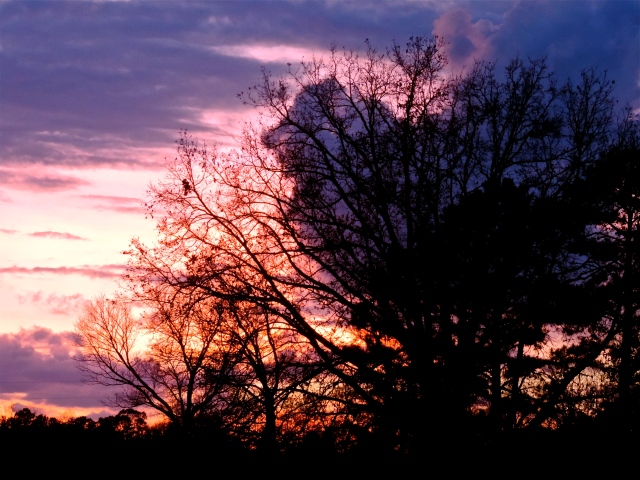 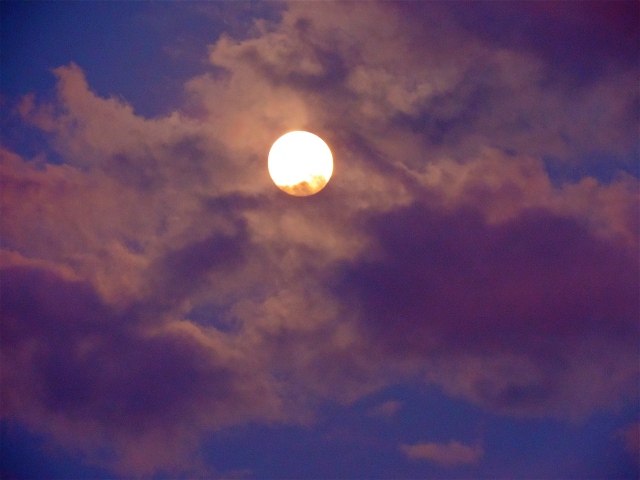 In the stillness of the in-between time known as twilight,
Sandwiched between sunset and moonrise. . .
Stepping briefly away from the never-ending emotional assault of manmade turmoil,
The otherworldliness found in Nature’s landscape, offers a respite to overwhelmed senses.

In front lay the setting of a December sun, offering a palette of warm and cool hues swiped across the western sky—the day’s final mark of the Master Artist’s dripping brushstrokes.
Behind rises a brilliant white disc shrouded in the purple gauze of a cloudy eastern sky. Each canvas offset with the royal shades of blues and purples as well as a few touches of soft pink whimsy.

Pivoting and turning both ahead and back, as each landscape’s offering is vastly different yet captivatingly mystical, a great sense of calm descends over the Earth.
Greater and more grand then anything made by man with the overstimulating offering of electronics, technology, and artificial this and that, the heavens above leave no doubt as to what is truly important.

The world stands at a crossroads.
Behind, lay the remnants of what was.
There in the shadows hides civility, morality, compassion, understanding, kindness, and the common goals of unity . . .
Ahead, the seemingly sinister rages of anger, anarchy, chaos, violence, looting, hatred, mistrust all coupled with a strong helping of individual self-centered agenda, set about ready for destruction. . .
The tragic results of falling away and turning from God’s word.
Yet many scoff at such simplistic explanations of the sad state gripping our world—
As the concept of an Omnipotent God competes with the more modern theology of Self.
Appeasement and all inclusiveness seem so much nicer than the following of certain tenants as stated in the covenants established between God and man.

. . .as that would require the belief in such a God and the yielding of self to something much greater. . .

The following words spoken by the late exiled dissident Russian author and Noble Prize Laureate, Alexander Solzhenitsyn, given during a speech in the late 1970’s, eerily ring deeply more prophetic for us today than perhaps the writer could have ever known:
“We have become hopelessly enmeshed in our slavish worship of all that is pleasant, all that is comfortable, all that is material — we worship things, we worship products. Will we ever succeed in shaking off this burden, in giving free rein to the spirit that was breathed into us at birth, that spirit which distinguishes us from the animal world.”

Therefore, dear friends, since you have been forewarned, be on your guard so that you may not be carried away by the error of the lawless and fall from your secure position. But grow in the grace and knowledge of our Lord and Savior Jesus Christ. To him be glory both now and forever!
Amen.
2 Peter 3:17-18