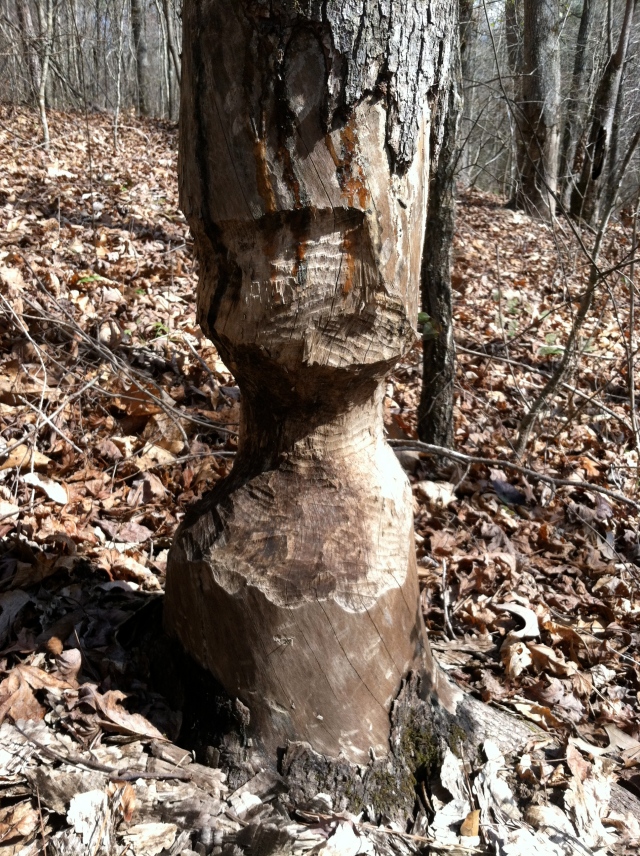 Last fall, while out walking in the woods, I came upon this most odd looking tree. My husband informed me that the poor tree was intended for a beaver dam but it appeared as if the beaver decided at the last minute to pick a smaller tree. I was amazed at what this small animal was capable of doing to such a huge tree.

I know that anyone who has had to contend with beavers and the “breaking up” of a beaver dam does not share in my amazement. Where I see ingenuity and determination, they see a formidable pest and annoyance.

When I was in elementary school, our school mascot was a beaver (why in the world a Fulton Co school chose a beaver for a mascot is beyond my soul. We were in a major metropolitan area—the closest thing to nature was a squirrel, but I digress). Each morning, after the Pledge, the teachers were to open all the classroom doors and the entire elementary school would join in singing the school’s “fight” song. Now as to why an elementary school had a “fight” song, I am not certain, but sing we did, each and every morning. Now remember, this was the early 1960’s, we were in the midst of a Cold War, coming off the whole Cuban Missile Crisis deal, patriotism was at an all time high, I suppose we had to show our fighting American Spirit wherever possible…and that is not a bad thing.

I suppose it is so ingrained in my memory that I still can recall the lyrics with the key line being “…we work like beavers, never waste a day…” So I have taken with me the mindset that beavers are hard working, determined and never wasteful…good attributes. So this little discourse today is not intended to draw the ire of any land owner or farmer who has had to fight the mighty beaver to reclaim their property…it is rather a look at determination and hard work.

When I was in the classroom, each morning I would give my kids the daily run down. I kind of felt like Sarge from HillStreet Blues as he would gather the officers, each morning before sending them out on the streets, giving them an overview of the day’s workload, concerns and responsibilities before telling them to “be safe out there”. But rather than telling my kids to be “safe out there,” I would tell them to the be the diligent beaver I knew each of them to be. I explained how one of the hardest working animals in the animal kingdom was the beaver–they never complained, lamented that they were tired but simply went out each day, cutting down trees, dragging things so much heavier than their little bodies, in order to built a “home”/ den.

It is on this Monday that I am mindful that it is the start of a new week complete with new possibilities—be the diligent beaver, be determined, not wasteful of time or abilities, and do your best at whatever it is you do—hard working—all good attributes.
“be safe out there” as well….