“Poets do not go mad; but chess-players do.
Mathematicians go mad, and cashiers; but creative artists very seldom.
I am not, as will be seen, in any sense attacking logic:
I only say that this danger does lie in logic, not in imagination.”
G.K. Chesterton, Orthodoxy 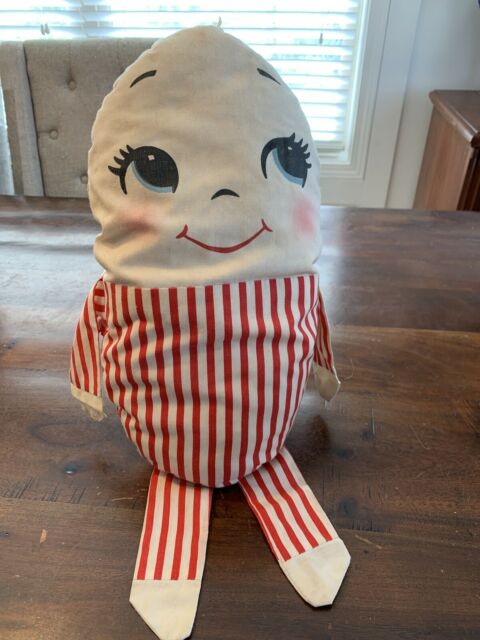 When I was growing up, rather than actually curse, my dad would always say “spit”
or “I’m so mad I could spit”

As a youngster, I certainly didn’t know spit was a substitute for a “bad” word and
I always wondered how mad one needed to be in order to spit.

And despite being a tomboy, I was too lady-like to ever spit!

You see that picture of a vintage 1960 Humpty Dumpty?
Well, I had one just like it.

Actually, I had several– as my Humpties were each loved to death.
The last one consisted of just the beige insert, the Humpty exterior had long since
worn away…Humpty was with me from the time my parents brought me
home from the adoption agency to the time I got married.
There may have been two total as my mom did her best sowing and patching
the worn love.

My last Humpty has lived in a box at the top of the closest now for nearly 40 years—
add 20 more to his age, and we have an antique beige lump in a box.

But that beige lump absorbed more tears over the years and sadly a few angry
pulls and punches than anything or anyone ever close to me.

He was my constant companion and dearest confidant.

The Mayor is becoming a lot like me in that regard.

She has about 4 or 5 who are bed partners, soul soothers, and best friends.

Here we see a not so gentile sleeper with two stalwart sleeping buddies…
Bobobo (aka Vamparina) and Sky from Paw Patrol–missing is BeBe
(a tiny rabbit rattle, Big Bebe, a stuffed fawn along with Chase the Police Dog
from Paw Patrol.

If you aren’t familiar with Paw Patrol—it’s a cartoon on Nick Jr.
A cartoon that The Mayor and Sherrif both love.

According to its on-line information page, the show is about:
A group of six rescue dogs, led by a tech-savvy boy named Ryder,
has adventures in “PAW Patrol.”
The heroic pups, who believe “no job is too big, no pup is too small,”
work together to protect the community.
Among the members of the group are firedog Marshall, police pup Chase,
and fearless Skye.
All of the animals have special skills, gadgets, and vehicles that help them
on their rescue missions.
Whether rescuing a kitten or saving a train from a rockslide,
the PAW Patrol is always up for the challenge while also making sure
there’s time for a game or a laugh.

You can see Sky is sleeping by the Mayor’s side, but Chase is her favorite…
a police dog German Shepherd pup.

Here we see the day Chase came home to the Mayor and Sherrif from the store: 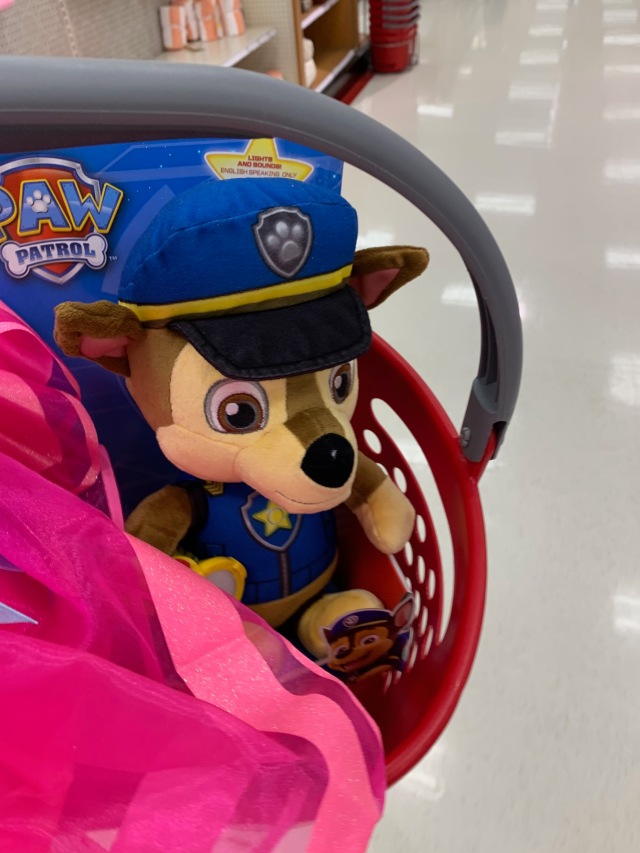 So I now want to know why a young child’s cartoon show, that first aired in 2013, has
now come under scrutiny and into the crosshairs of the cancel culture??!!

Could it be that there is a “police” dog on the show???

Yet according to an article on Fox News, here is a quote from a twitter troll
regarding the police character dog on this tiny tot cartoon:

“Euthanize the police dog,” one user said.
Others wrote “defund the paw patrol” and “All dogs go to heaven,
except the class traitors in the Paw Patrol.”

“The effort to publicize police brutality also means banishing
the good-cop archetype, which reigns on both television and in viral videos
of the protests themselves,” she continued.
“‘Paw Patrol’ seems harmless enough, and that’s the point:
The movement rests on understanding that cops do plenty of harm.”

The rumor circling on-line is that that Nickeloden has canceled the show
but is now denying such actions.

But the mere fact that idiotic adults are out there attacking a cute cartoon geared
toward our smallest members of our community of humankind has left me oh so mad.

So mad that I could spit!

I would think that we as a communtiy would want our young children to see our first
responders being portrayed in positive roles.
Roles of helpers, rescuers, and those who help us when bad things happen.

We want our kids to trust them if ever the need should arise that they must
step in when we can’t help our kids.

For crying outloud—when will enough be enough???

Maybe when they burn down Portland?
Maybe when our Democracy is traded in for pure anarchy.
Maybe when we all die during a pandemic
Maybe when Jesus comes back.

Have I not commanded you? Be strong and courageous.
Do not be frightened, and do not be dismayed,
for the Lord your God is with you wherever you go.”
Joshua 1:9