“He was a killer, a thing that preyed, living on the things that lived, unaided, alone, by virtue of his own strength and prowess, surviving triumphantly in a hostile environment where only the strong survive.”
― Jack London

“Love will find a way through paths where wolves fear to prey.”
Lord Byron

He waits for those who will hesitate, waffle, waiver, slip and fall.
Waiting patiently to devour those he can snap up when they least expect his attack.

Yet Hope has left an escape…
For there is one who has offered to take on the role of decoy and prey.
He affords us the opportunity of time and escape.. the ability to thwart the imminent attack.

Sadly there are those who are not interested in this selfless offer,
preferring to go it alone…on their own way… or worse…
choosing to simply ignore and disregard the inevitable attack.

Stealth is not on our side.
Time is questionable.
Escape improbable..

Unless, there is a sacrificial lamb…
And thankfully…
there is… 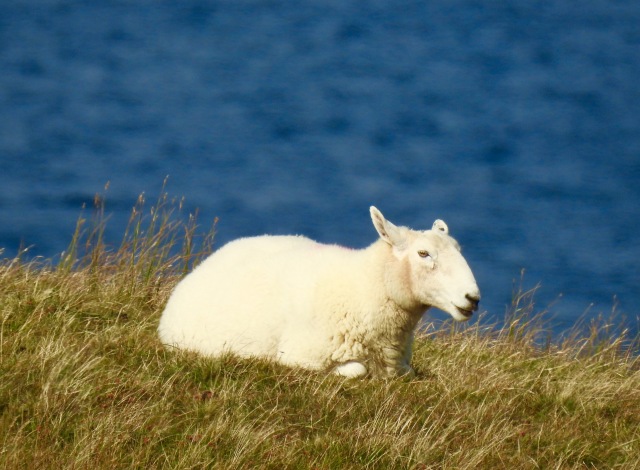 “Behold, I am going to send for many fishermen,” declares the LORD, “and they will fish for them; and afterwards I will send for many hunters, and they will hunt them from every mountain and every hill and from the clefts of the rocks.
Jeremiah 16:16

“When men choose not to believe in God, they do not thereafter believe in nothing, they then become capable of believing in anything.”
― G.K. Chesterton

(the skull of a whitetail deer found while walking in the woods / Troup Co. Georgia / Julie Cook / 2014

There are those moments in life when the balance between the magical and mystical somehow manages to make time stand still. We find ourselves privy to something so surreal, so otherworldly, that our senses strain to make sense of it all.

As we stumble upon those things of the unimaginable, we marvel over the mingling of death and decay and how lifelessness suddenly mirrors stately beauty.
How did it die? Why did it die? A litany of questions race across our thoughts, yet the only thing that we are certain of is the single fact that the questions will never have answers. 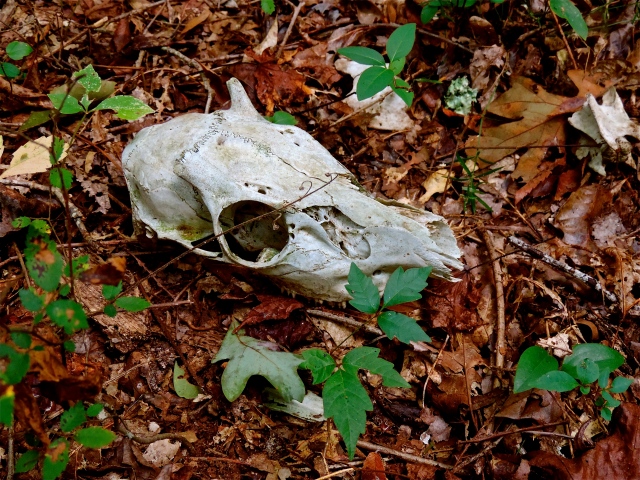 During our travels yesterday, deep into the woods, we came across not one, but rather two skulls of whitetail deer. One was young, most likely a spike. The other was a 6 point. From initial observation it appears that each deer mostly likely meet their demise last year.
Odd.

Rare as it is to stumble across a skull of a deer when out walking, it is odder still to stumble upon two.
When deep in a forest, far from any road or human interaction, questions wildly swirl in the recesses of the imagination.
Was it a rattlesnake?
An errant shot by a hunter?
Could the two deaths signal that the dreaded black tongue disease is in the area? A cruel disease that will decimate any herd in a short amount of time.

As I stare at the contrasting starkness of both beauty and death, my thoughts drift to far away place and of a mystical image of a magnificent stag adorned with a brilliant golden cross resting between his horns. The image is of a legendary red stag which appeared to a lone man, adrift in his sorrows. A rich nobleman who had recently lost his young wife during childbirth. Bitter and lost in his sorrow this lone man took to the isolation and vastness of an endless forest. His time spent mindlessly wandering and spitefully hunting.

His heart now hardened, he had no time for God. His time was his own, he offered none of it to the observance of a faith which now seemed lost in the sorrow of a broken heart.
Yet God had plans for this lone man with a broken heart. He was destined to hunt more than mere animals as he was set to hunt and capture, for the betterment of the faith, the hearts and souls of men.

The story is of St Hubert or Hubertus of Liège. He, along with St Eustace, are each considered the patron saints of hunters.

St Hubert or Saint Hubertus (born c. 656 to 658, probably in Toulouse; died 30 May, 727 or 728 in Tervuren near Brussels, Belgium), called the “Apostle of the Ardennes” was the first Bishop of Liège. Hubertus is another patron saint of hunters, but also of mathematicians, opticians and metalworkers, and used to be invoked to cure rabies. Saint Hubert was widely venerated in the Middle Ages. The iconography of his legend is associated with the legend of St Eustace.

As a youth, Hubert was sent to the Neustrian court of Theuderic III at Paris, where his charm and agreeable address led to his investment with the dignity of “count of the palace”. Like all nobles of the time, Hubert loved the pleasures of “the chase” i.e. hunting.

Meanwhile, the tyrannical conduct of Ebroin, mayor of the Neustrian palace, caused a general emigration of the nobles and others to the court of Austrasia at Metz. Hubert soon followed them and was warmly welcomed by Pippin of Heristal, mayor of the palace, who created him almost immediately grand-master of the household. About this time (682) Hubert married Floribanne, daughter of Dagobert, Count of Leuven, a great and suitable match. Their son Floribert would later become bishop of Liège.

Unfortunately, his wife died giving birth to their son, and Hubert retreated from the court, withdrew into the forested Ardennes, and gave himself up entirely to hunting. But a great spiritual revolution was imminent. On Good Friday morning, when the faithful were crowding the churches, Hubert sallied forth to the chase. As he was pursuing a magnificent stag or hart, the animal turned and, as the story narrates, he was astounded at perceiving a crucifix standing between its antlers, while he heard a voice saying: “Hubert, unless thou turnest to the Lord, and leadest an holy life, thou shalt quickly go down into hell”.
Hubert dismounted, prostrated himself and said, “Lord, what wouldst Thou have me do?” He received the answer, “Go and seek Lambert, and he will instruct you”.

Hubert set out immediately for Maastricht, for there Lambert was bishop. Saint Lambert received Hubert kindly, and became his spiritual director. Hubert now renounced all his very considerable honours, and gave up his birthright to Aquitaine to his younger brother Odo, whom he made guardian of his infant son, Floribert. Having distributed all his personal wealth among the poor, he studied for the priesthood, was soon ordained, and shortly afterwards became one of St. Lambert’s chief associates in the administration of his diocese.

By the advice of St. Lambert, Hubert made a pilgrimage to Rome in 708, but during his absence, Lambert was assassinated by the followers of Pippin. According to the hagiographies of Hubert, this act was simultaneously revealed to the Pope in a vision, together with an injunction to appoint Hubert Bishop of Maastricht.

He distributed his episcopal revenues among the poor, was diligent in fasting and prayer, and became famous for his eloquence in the pulpit. In 720, in obedience to a vision, Hubert translated St. Lambert’s remains from Maastrict to Liège with great pomp and ceremonial, several neighbouring bishops assisting. A basilica for the relics was built upon the site of St Lambert’s martyrdom, and was made a cathedral the following year, the see being removed from Maastricht to Liège, then only a small village. This laid the foundation of the future greatness of Liège, of which Saint Lambert is honoured as patron, and Saint Hubert as founder and first bishop. Hubert actively evangelised among the pagans in the extensive Ardennes forests and in Brabant.

Hubert died peacefully in Fura, Brabant, 30 May, 727 or 728. He was first buried in the collegiate church of St. Peter, Liège, but his bones were exhumed and translated to the Benedictine Abbey of Amdain (“Andagium”, in French “Andage”, the present-day Saint-Hubert, Belgium) in the Ardennes in 825. The abbey became a focus for pilgrimages, until the coffin disappeared during the Reformation.

Saint Hubert was widely venerated in the Middle Ages and several military orders were named after him: the Bavarian, the Bohemian and that of the Archbishop Prince-Elector of Cologne.

His Feast Day is 3 November.
(excerpt taken from romanchrisendomblogspot.com) 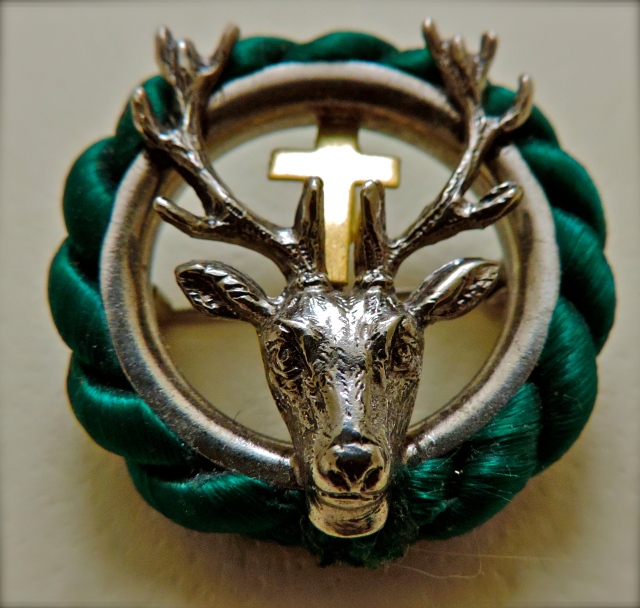 (the pin of St Hubert which is to be worn on the day of the hunt, reminding those who hunt to offer thanks to a gracious Heavenly Father who provides for all of our needs. . .)