“the ‘task of the conscience’– a word of great value in Western civilization,
is to determine what that divine purpose is and then to live
it out irrespective of the cost”
observations about Pope John Paul by George Weigel
excerpt taken from The Divine Plan
John Paul II, Ronald Reagan and the Dramatic End of the Cold War
by Paul Kengor and Robert Orlando 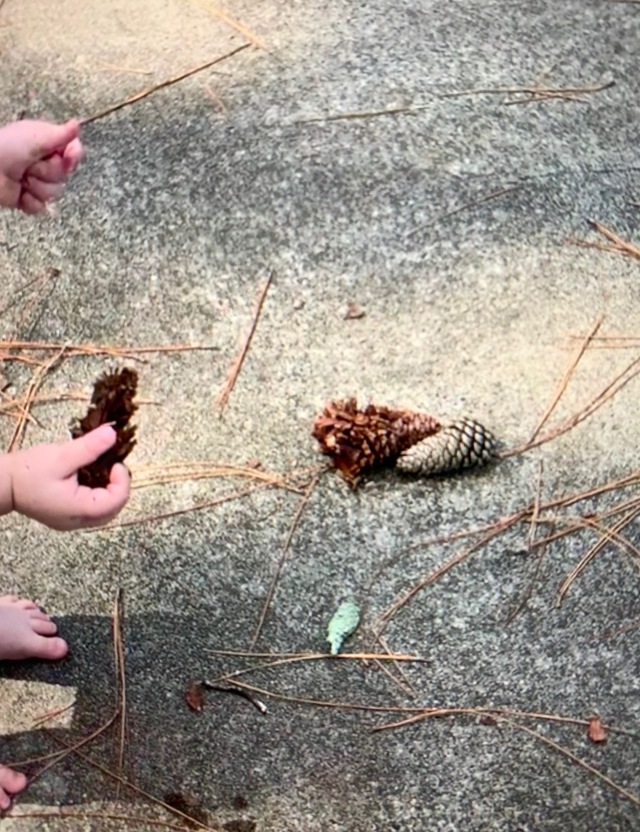 The above image is a picture within a picture…or rather, it’s a still-shot from a video.
And the title is a quote I actually uttered yesterday…
as in, “DO NOT PUT THAT SQUASHED PINECONE IN YOUR MOUTH!!

However, that story will have to wait as I simply needed an
the attention-grabbing title today…
As in I wanted your full and undived attention.

I’ve been spending time with the Mayor and the new Sheriff the past several days,
helping out…and I hate that I’ve not even had the chance to share with you about their
charming encounter with the ocean…
But it seems as if the world has tilted just a bit further off her axis and has needed
a tad more of my attention than merely my chattering on as a doting grandmother
who’s droning on about her grandkids…

But first a quick word to the wise…it is not prudent nor is it wise to pick up a run over
and flattened pinecone and proceed to poke it into your mouth and then bite down…just saying.

But now to the matter at hand.

It seems that there has been a lot of talk as of late…here in the blogosphere, FB
(or so I’m told) as well as on various Christian media outlets about more and more
big-name Christians announcing their seemingly sudden withdrawal from the fold
so to speak.

Odd to want to grandstand over losing one’s faith.
Opting to be vocal and in the spotlight rather than introspective, sad and
living the loss.

Or as IB so aptly noted the other day, in the words of the famous band out of
Athens, GA—REM—grandstanding over ‘Losing My Religion’…

And to be honest…not being one who runs in the evangelical or other
protestant denomination’s circles or one who keeps up with the current mega-church craze,
I can’t say that I’m familiar with many of these recently fallen sheep.

But as I’ve been reading…there is indeed a long, sad, public and very vocal fall
taking place.

I have, however, on the other hand, been a bit more focused on the sexual abuse scandal
rocking the Catholic Chruch as well as the naming of a few notable and now long deceased
Anglican priests whose names have been sullied by the same accusations.

And so as I look out over the horizon of our collective Christian faith—
our denominations far and wide, I can see Satan being very busy as work.

I’ve also written that this is indeed a mad world—a mad mad world on so many levels.
Mad as in crazy nuts and mad as in viscerally angry.
We have troubles my friends and I do indeed fret for my darling grandchildren.

The slick lies that are being tossed about fast and loose as truth
from things such as children’s tv and music, to what defines a family, to
legalized murder in delivery rooms, all the way to the odd notion of fluid genders…
it is enough to make me want to grab up my babies and run and hide.

But we cannot hide.

We cannot ignore it any longer.
We cannot turn a blind eye and pretend this isn’t happening.

We are being spoon fed lies as truth.
Lies as legalized truth.

As a once overly zealous teen, when reading the stories of those early Christian martyrs in
places such as Rome and Judea, I would often imagine having been there and how I would have
hoped to have stood up so bravely as those countless men and women who suffered
grievously under torture, mutilation and even death—
suffered almost readily rather than giving in and recanting their faith.

Because their faith was precious.
It was dear.
It was sacred.

Today it seems to be more passe, victimized and tired.

And so when I read of these modern-day Christians recanting their faith
so flippantly and arrogantly, apologizing to the masses of those seemingly innocent souls
who they feel as if they had helped to lead astray, I am more than saddened, I am sickened.

For they have bought into the culture gods hook, line and sinker…
They are now the poster children of a hedonistic and self-absorbed culture…
selling a bad bag of goods to an innocent fold.

There are thousands around this world of ours who continue to die for the Christian faith.
They worship in secret and in whispered tones.
They live in places such as Russia, China, Africa, Myanmar, Yemen, Iran, Iraq…
They love Jesus and are willing to pay the ultimate price for that love.

Their worship is not easy nor is it easy to come by…
not as it is here in the West.

And yet here in the West, we too indeed suffer as well.
It’s just that we suffer on a quieter level.

We are shunned, ridiculed, threatened with legal action and told we may not utter
the name of God or Jesus as we once did…
Words spoken, along with the right to speak those words, was simply taken for granted.

And maybe that’s part of the problem.
We’ve taken for granted the Precious and the Sacred.
We trivialized our God and made that which is Great, small.

And now Satan is working overtime.

Time is running out.
He knows this.