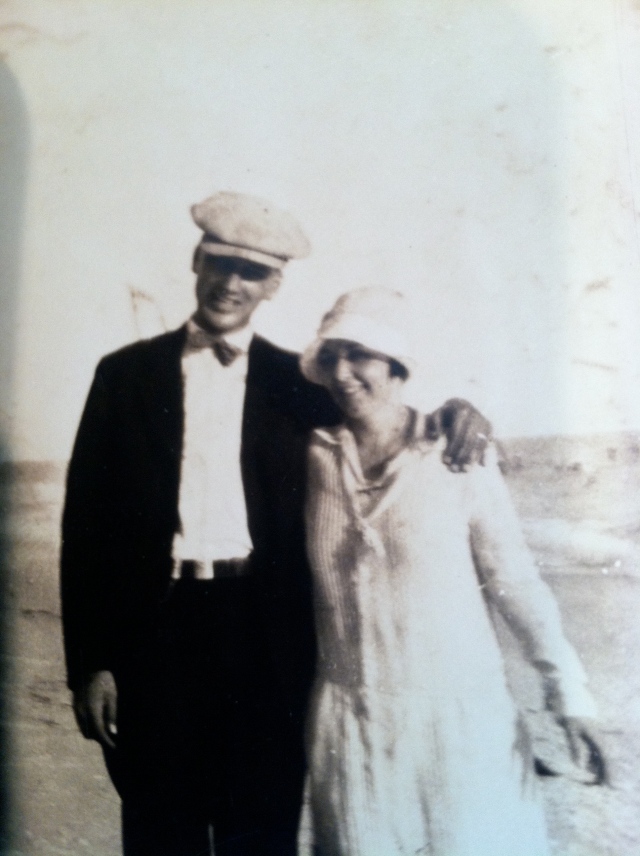 Ann and Paul were married June 4, 1921. Today is their 92nd wedding anniversary. This picture shows two very happy young people who had no idea that 92 years from the very moment their picture was taken, on a honeymoon that spoke of so much great expectations and promise, that a 53 year old grandchild would share their beginning moment with the world.

I recently discovered this picture, along with a wealth of long forgotten old photographs, in a box buried deep under years of “junk” in my dad’s basement. Never having seen so many of these old pictures before, I have realized that I am full of all sorts of questions—questions I fear that will sadly go unanswered. The questions I now find myself asking my dad, questions about his parents or questions about my mom’s parents, are met with the frustration of his ever fading memory–as that is what Alzheimer’s does, it robs one of those memories. These sorts of questions never seemed to have been asked years ago when I was younger and now sadly the people who had the answers are no longer with me, all but the one with the fading memory. The curiosity of “beginnings” seems to only emerge later in life—I suppose life is funny that way.

Young Paul came to Atlanta by way of New York. His father, a doctor, moved the family south at the turn of the new century. Why I do not know. He was a student at The Georgia Institute of Technology (aka GA Tech) when he met Ann. I found a picture of him at a desk in his dorm room. As well as a couple of pictures taken of what appears to be some sort of ROTC regiment of about 50 young men, all in uniform, taken in what is today Bobby Dodd Stadium. It was taken during the height of WWI, so I imagine all young men at the time were faced with the possibility of going overseas to fight in a war they didn’t understand. Such things never seem to change…

There are images of him in his cap and gown. Images of him in uniform from high School, Georgia Military Academy–two diplomas…GMA dated 1915 and GA TECH dated 1919…and then this image, 1921. I was only 7 when he passed away. At 7, to my young mind, my Pop was bigger than life–bigger than any super hero. It is because of his bigger than life persona that images such as these, found so many years later, seem only more precious—this is where life began for my super hero, and in essence for me as well.

She came to Atlanta upon graduating from a small west Georgia woman’s college. Her family’s home was in a tiny middle Georgia town. Her father was a decorated soldier in the Spanish American War, where, as a young man, barley 30 years old, the Lt. Colonel was mortally wounded. He was brought home to Georgia where he laid in state at the Capital Rotunda, the only non politician in the history of the state of Georgia having done so, all before the long train trip “home” to LaGrange, GA where he was buried with full military honors.

His suddenly widowed young wife was left to raise 4 very small children. She moved them back to her family’s home in middle Georgia. Only 3 of the 4 children survived to adulthood. Annie attended college, something woman, particularly in the early days of the 20th century, in the deep south, simply did not do. After graduating college, Ann moved to Atlanta looking for work—–something else young woman of her day were not doing.

There is the story of the college student Paul and his cousin hopping on a street car in Atlanta. Spying an attractive very petite young lady riding alone, Paul jumps over to her seat hoping to strike up a conversation. The problem was the plug of tobacco Paul had in his mouth. Annie politely told this brazen young man that she would not speak with anyone who had a wad of tobacco in his mouth as she coyly turned her head to look out the window.

Paul, fearing he would miss his only moment of opportunity, does something that calls for desperate measures and seemed to have made perfect sense at that particularly pivotal moment, he swallowed the wad of tobacco.

It is from that precise moment that I must go alone in my understanding of “my” history for you must remember that their history is indeed my history and Dad doesn’t seem to be able to sort out any of this history of ours as his mind and memory are both turning against him, against me, and against how we came to be at this current moment in time.

Life is funny in that we all feel the important internal pull to our very beginnings–what it is, who it is, how it is that we all got to be where it is and who we are today. Pieces of important puzzles being constantly pieced together. As an adopted person, beginnings seem doubly important to me (see the post “Who in the heck is Sylvia Kay and what have you done with her” to better understand this whole adoption issue of mine and the importance of understanding who I am and how I came to be….)

Paul and Ann go on to have a seemingly wonderful life. Paul becomes a very successful business owner in Atlanta that takes him all over the country. As a couple, they rise up through Atlanta’s high society. There are the tickets to the premiere of Gone With the Wind, where they met Margaret Mitchell, Clark Gable and Vivian Leigh. There are images of Paul with then governors of Georgia and leaders of growing industry, images with his two young sons on a road trip across the south where a young Mr. Mole (aka my dad) is downing a bottle of Coke on the steps of the Louisiana State Capital. There are images of a proud man, arms wrapped around his two boys with a loving wife looking on……little would she know of her own devastation when he was taken so suddenly from her when he was barely older than I am today.

However today is not a day for looking back on the ending of a happy story but it is rather a day for looking at the beginning of one……
….So on this day, this June 4, 2013 I say happy anniversary Nany and Pop. I miss you both.