It is Christmas every time you let God love others through you.
Mother Teresa 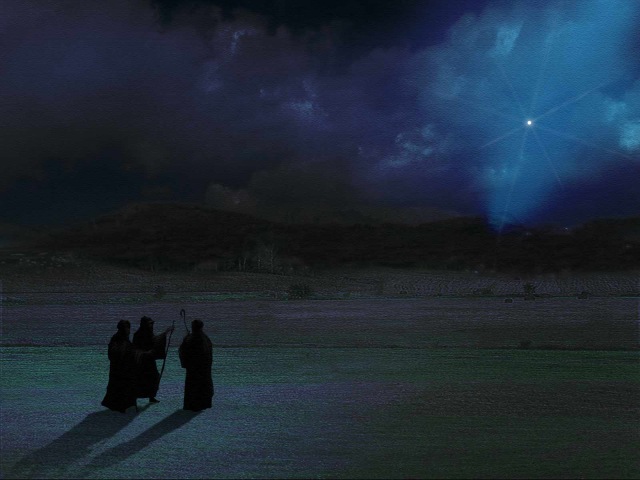 In that region there were shepherds living in the fields,
keeping watch over their flock by night.
Then an angel of the Lord stood before them,
and the glory of the Lord shone around them, and they were terrified.
But the angel said to them, “Do not be afraid; for see—-
I am bringing you good news of great joy for all the people:
to you is born this day in the city of David a Savior,
who is the Messiah,the Lord.
This will be a sign for you:
you will find a child wrapped in bands of cloth and lying in a manger.”
And suddenly there was with the angel a multitude of the heavenly host,
praising God and saying,

“Glory to God in the highest heaven,
and on earth peace among those whom he favors!”

When the angels had left them and gone into heaven, the shepherds
said to one another,
“Let us go now to Bethlehem and see this thing that has taken place,
which the Lord has made known to us.”
So they went with haste and found Mary and Joseph,
and the child lying in the manger.
When they saw this, they made known what had been told them about this child;
and all who heard it were amazed at what the shepherds told them.
But Mary treasured all these words and pondered them in her heart.
The shepherds returned,
glorifying and praising God for all they had heard and seen,
as it had been told them.
Luke 2:8-20

You lead the sheep to fertile fields for feeding, you sheer them when its time,
you keep count of the ewes, rams and lambs and you watch out for any predators.

Sheep need tending to—they are considered to be defenseless animals as well as
not very bright or smart.

They eat, sit, stand, sleep…. and they run.
They run if they sense trouble—that’s about the extent of their defenses.
They do not take a stand.
They will not fight to the death.
And they don’t always run far or totally out of harm’s way.
They will scatter, not knowing how to find their way back to the herd.
A lone sheep is a defenseless sheep.
Their adversary is more stealthy, faster and more determined and knows how
to disperse a herd.

So sheep need a shepherd.
They need an overseer.
And thus the shepherd keeps watch, both day and night.
Yet it is in the night that the shepherd must be more keen to watch because
predators prefer to do their hunting in the dark of night.

There are only a few out this night, watching.
Most likely it is you and a few relatives, as this has been how your family has made a living since you grandfather’s father and his father before him made their way.
Maybe tonight it’s just you and your brother-n-law, or maybe it’s an uncle and a cousin
who have joined you during this dark lonely night.

Each of you pull the woolen blankets tighter around your shoulders because the air is
more chilly then usual.
The herd seems a bit agitated.
Do they smell a predator?
Have they heard something edging its way closer?

The moon is not full yet the night sky is oddly bright.
You scan the sprawling and now eerily lit field, looking for any sort of movement.

Looking upward into the inky night sky, you notice a single star casting an
unusual intense direct light.
Are your eyes playing tricks or is the night slowly becoming more like day?
Looking toward to where the light is cast, you can actually make out the far-off
silhouette of Bethlehem—because the star seems to be directly over and actually illuminating the sleepy little quiet town.

You call your kinsmen to come close.
What do they make of the oddly lit sky.
What do they know of Bethlehem.
This town which bore the King David.

And just when you are pondering the oddity of this particular bright star, you are
suddenly aware that you are no longer alone.
It’s no longer just you, your relatives and the sheep on this lonely chilly night.

There is a multitude of beings you have never seen before.
Before you have time to even focus on what you are witnessing, they speak.

as you suddenly realize you actually have no fear.

In that your salvation has just been born and is to be tangibly found—
lying directly underneath the light from the very star that you had
noticed shining over the far distanced town of Bethlehem…..

Oddly you don’t feel the need to decipher or discern…you don’t feel confused or
disoriented.
You are neither overwhelmed or dismayed—rather you are fully alert and
in the minute…the only thing you feel is now a sense of urgency to go to
see this newly born “Salvation”….

As it is now to this star that you know you must now go….

And those who are wise shall shine like the brightness of the sky above; and those who turn many to righteousness, like the stars forever and ever.
Daniel 12:3