“A room without books is like a body without a soul.”
Marcus Tullius Cicero 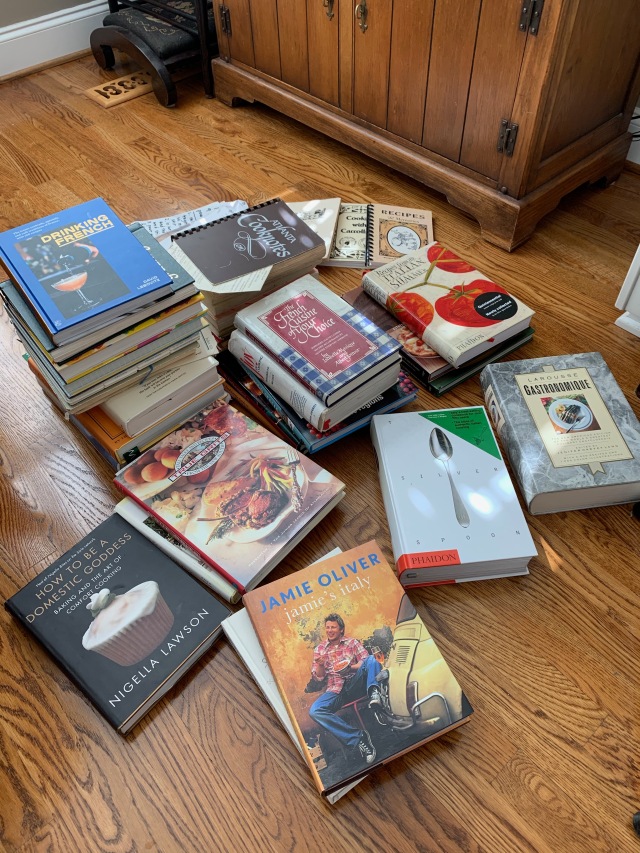 (one of many piles of accumulated cookbooks / Julie Cook / 2020)

Once upon a time, long ago and far away…long before there was a thing
known as the internet…
a time when landlines were all that we knew for communication and payphones
were the only way we could touch base with others when away from home…
it was a time when the printed word was all we had—newspapers,
magazines and books…it was a time when the printed word connected us
to what was and what could be.
Our world was intertwined and deeply entrenched with all things typeset.

And so I am finding that during this trying time of packing up my world…
I’m finding that I am slightly overwhelmed by the number of books I have
accumulated over the years.

As an art teacher with a proclivity for the Renaissance, as an
armchair historian who devours all things World War II,
as a huge fan of Winston Chruchill, as a person deeply interested in Christian symbology
and mysticism…I have amassed a small personal library.
Heck, it’s more like a decent sized library.

So during yesterday’s sorting, the task was to puruse, purge and pack cookbooks.

A love of cooking has run deep in my veins.

I had grown up watching Julia Child’s cooking shows with my mom.
Later it was Atlanta’s own Natalie Dupree.
Any and all cookig shows on PBS.

Throw in all of Mother’s Southern Living cookbooks and I learned early on
the importance of food—
an importance that reaches far beyond mere sustenance.

Food is communion.
It is a tie that binds.

My mom was not the greatest cook but she could make wonderful,
made from scratch, biscuits.
Whereas I did not inherit my mother’s biscuit magic,
I did develop however a love for the magic that rests in the
creativity of any kitchen.

Yet I can vividly remember the day I felt defeat when my mother discovered the thrill
of the cooking bag and hamburger helper.
I, on the other hand, was growing more and more fascinated by all things French,
Itlaian, fricased and sauteed.

So as I was knee deep in the cull taking place in the kitchen,
seeing so many of the older books–
my mind suddenly went racing back to a different time. 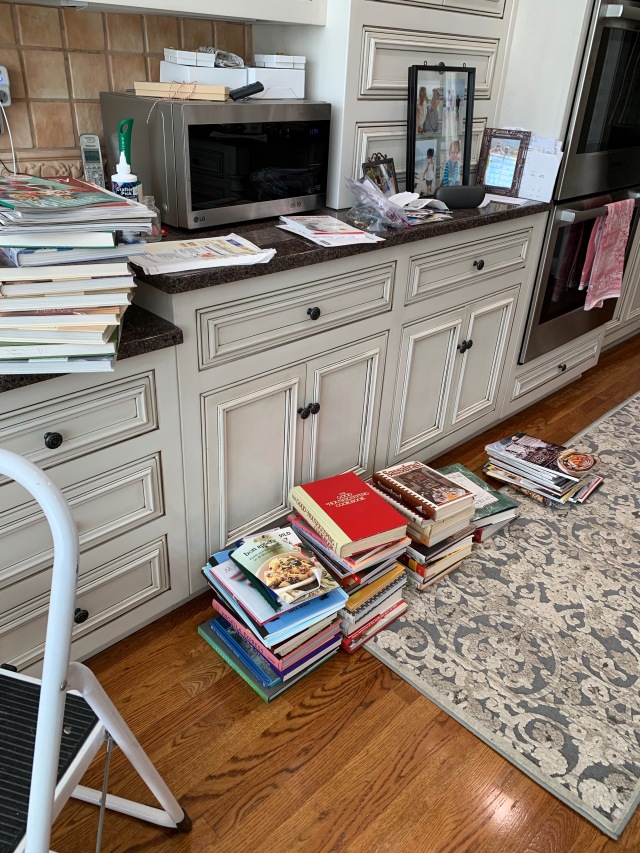 “Many years ago when my mom was in ICU battling cancer, and I was a
newly married young woman, I would go each day to the ICU Waiting Room
carrying an armload of cookbooks–upwards of 8 at a time.
As I would sit for hours waiting for the three 15 minute times of visitation allowed
in a 24 hour period, I would read page per page, cover to cover of every type
of recipe and cookbook imaginable.
It was my therapy and my catharsis.
Maybe I needed to know that in the dark shadows of death,
where I had found myself in a vigil for my mom, Creativity,
which I equate with life and living, was still very much present and attainable.”

I should add that I was driving about an hour and a half each day over to Atlanta just
to sit in that ICU, only to drive that hour and a half back home each evening.
A sorrowful ritual that I kept up for 9 weeks.
It was a lonely and very difficult time…but I found an necessary diversion
as well as solace in my cookbooks.

They were cookbooks that my aunt had bought on her various trips and books I had found
while rumaging through the cooking section of every book store I could find.

So as I made the difficult decision yesterday of what books I would keep and what books
I would “release”–I found myself feeling a heavy sense of sadness—
sadness not so much over losing some long loved books, but rather sadness over the fact that
we live in a time when books are becoming obsolete.

Despite my cullig and purging, I fear our movers will be none too pleased when they
find the number of boxes full of books that I have packed up.
Boxes I can’t even begin to pick up…as in they are heavy as lead.

But some things will just have to make this journey with me.
Solace that will be there for me as I unpack in a new world come January. 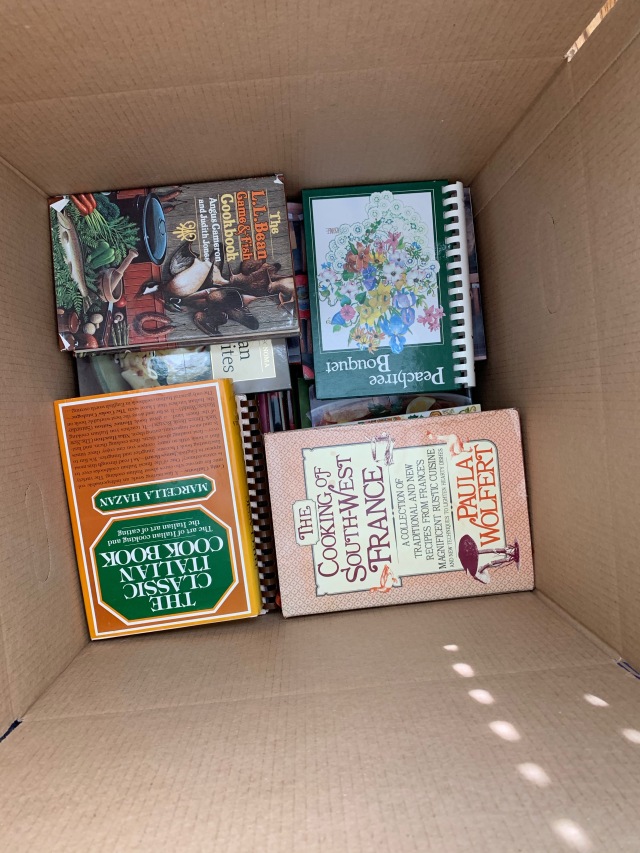 The cloak that I left at Troas with Carpus, bring when thou comest,
and the books, especially the parchments.
2 Timothy 4:13

“Our hearts grow tender with childhood memories and love of kindred, and we are better throughout the year for having, in spirit, become a child again at Christmas-time.”
― Laura Ingalls Wilder

There is a joyful magic, which sweeps in on the cold winds of late December, bringing to those of us lucky enough to be in its path, a respite from reality, albeit fleeting, full of wonder and awe. Children, with their innocence and almost reverent joy for the mysteries hidden, invoke a contagious mass amazement which spreads the ripples of excitement to the most jaded among us. Young, and now old, all seem to gather in anticipation of something most tantilizingly special.

Memories of happier times come rushing to the forefront of our adult minds with each inhaled scent of freshly baked cookies, roasted marshmallows, cinnamon sticks and peppermint candy canes. The laughter of children building snowmen, the angelic sound of choirs singing, the ringing of a single bell, and the dizzying din of the masses flooding the malls and stores each provide a bit of giddy excitement in even the most hardened of hearts.

The special magic which this time of year seems to create is enjoyed and savored by not only believers but by those of all faiths as well as non believers alike. Perhaps that is the true gift of this most treasured time—those who believe reawaken their vigilant search, looking for the ever present star as a continued sign that a King and Savior of all mankind, is once again re-born—As for those who do not believe, their hearts are made equally as light as the mystery and magic of what Christmas is all about, and has been about around this globe for centuries, is once again bathed in the radiant light of magical moments, anticipation in what can be, and the hopefulness that is once again ignited for all mankind.

My hopeful blessing to you all during this most special time of year is for Peace and Goodwill to all men, woman and children. Merry Christmas.

“I wonder if the snow loves the trees and fields, that it kisses them so gently? And then it covers them up snug, you know, with a white quilt; and perhaps it says “Go to sleep, darlings, till the summer comes again.”
― Lewis Carroll, Alice’s Adventures in Wonderland & Through the Looking-Glass

A brilliant yet blindingly colorless blanket lays hold of the earth, as a heavy silence creates a void between ground and sky.
When breath becomes visible and tears are but faceted crystals which radiate with diffused light.
The pristine sterility makes even the birds self-conscious.
Everything is made new, better, brighter.
As far as the eye can see is now refreshingly clean. It is as if the earth, and all that it contains, has received a fresh coat of white paint.
The worn tattered ground, once so familiar, is suddenly now foreign with nary a blemish.
A smooth glistening white carpet, starched and crisp, begs to be sullied by young and old.
There is magic in the air and yet it all remains veiled in silence.
Only the muffled crunch under each step is the single sound in a world suddenly gone quiet.
It is the joy of every child and the bane of most adults.
And yet we all wait in grand anticipation, ever vigilant by the window.
Do you see it?
Yes, Yes!! It’s here, it has arrived again, just as it has time after time.
Joy stirs in the heart.
Childhood is suddenly present.
Magic is now visible.
Forgotten is the slush, the dirty wet, the bitter bone chilling cold, the slips and falls.
Forgotten is the shoveling, the trepidation of foot, the need for dry warmth.
For today, we all are children as we marvel with awe and wonderment at the spectacle now falling from the heavy grey sky.
Giddy laughter echoes throughout the house as boots and gloves are quickly assembled.
Pieces of cardboard and baking pans must act as make shift sleds.
The hot chocolate is quickly being heated.
Where are the marshmallows?
At this moment of this day, all seems right with the world.
Happiness has fallen from the sky as once again, finally, the first snow of the season has arrived. . .

(it should be noted that here in the south, we have had rain, and now torrential rain, for 9 straight days)