(ok, this is a speed hump, but you get the idea)

In a lifetime long ago and far away,
I was once a prolific writter.

I use to actually write…

Not like I do here pecking away in blogville, but I actually used a pen and paper
and I wrote letters, cards, notes, journals…

A good many of those cards and letters were addressed to my godfather–
who in turn, wrote and sent letters and cards right back.

Over the years I saved every one of those pieces of correspondence.

They were the tangibles to our relationship.
I think we were each a tad freer when writing as expression and thoughts
flowed freely.

Those saved letters, notes and cards may be found in overstuffed bibles,
books, drawers, and any number of boxes from that past life of mine…

I recently found one of those letters.

At the time it was written, my godfather was probably just a little older than I am now.

In the letter, he made mention of some health issues he’d been dealing with-
adding that such was an ode to the aged.

Well, I kind of get that now.

I am now keenly aware of the obstacles, speed bumps, and potholes…
all of which are part of the distracting messes that get in our way,
while we attempt to move forward on that proverbial road of life.

As we age, the space between those bumps, potholes, and obstacles feels as if
it grows ever closer, more precarious and much more difficult to avoid let alone maneuver past.

There seems to be less road but only more things that force us to detour from our straight pathway.

I feel as if I’ve been riding those speed bumps, as of late, much like some sort of
downhill freestyle mogul skier.

There’s been a rising crescendo of health mysteries colliding into one another like
rouge asteroids out in space…bouncing me around violently like a ball in a pinball machine.

So last week, in between my running from test and test, doctor and doctor, I
actually had a long-standing scheduled routine mammogram.

No big deal right?
Well, right, it shouldn’t be ..but surprisingly it was .

The problem was, it became a big deal fast.

I went Wednesday morning for my scheduled appointment and by Thursday evening I received an email
that there was an ‘abnormality’—an abnormality that required a lengthy revisit with
some more intense testing.

Abnormality is never a good word.

Normally, alarm bells would be sounding.
The C-word would be swirling in a mind now on overload.
Imagined scenarios would be playing out in a now panicked mind like a
melodramatic soap-opera.

I read the note to my husband who suddenly looked stricken.

My response was atypical.

I laughed because it was an ‘are you freaking kidding me?!’ moment.

I suppose I could cry over the one more erratic pin suddenly being jabbed into the voodoo
doll with my name on it…or…I could laugh.

And so yes I opted to laugh.

It was about 18 years ago that I had had a scare following a routine mammogram.
Back then, the questioned concern was found within my left side.
I was told I would need to have lumpectomy…
And blessedly, pathology proved the scare to be benign.

All these years later, it was the same side…again.

And so I went today for my marathon re-do.
Plan on 2.5 hours they told me.
But they assured me that I would have all the results before leaving.

Somewhat because the unknown can always be scary.
I told my husband I wanted to go to the appointment by myself…
to be lost in my thoughts I suppose.

Our new fancy-schmancy medical complex is a sleek modern sterile facility.
Gone is the once warm and fuzzy homey feel to the Women’s Center…
Today’s further testing seemed rather void and cold leaving me feeling
detached…of which might have been a good thing.

I had two intense procedures in the course of my time today at the center.
And the final word was there were only cysts showing within the normal range.

So now it’s time to gear up for the next obstacle…stutter-stepping in order
to clear the next hurdle life throws up my way.
And how do we gear up for such you ask???

We take the hand of the One who has long asked to travel this journey with us.

He even offers to carry us when we really grow weary…

So I think I’ll take Him up on His offer…

I have said these things to you, that in me you may have peace.
In the world you will have tribulation. But take heart; I have overcome the world.”
John 16:33

Human life, then, we may see as the preparing for the life of Heaven.
It means, on the one hand, complete self-conquest.
The soul must conquer the body and bring it into full obedience to God’s law;
and the soul must itself come into full submission to God.
It has, from God’s Church, the truths it needs to know about God and man and its own destiny:
from the same source, it has the law that will govern it in the right use of itself and in the
right relation of love and duty to others.
But, as has been seen, given that man is to live a life above his nature,
he needs those gifts above his nature which we call the Supernatural Life.
Frank Sheed
from A Map of Life: A Simple Study of the Catholic Faith 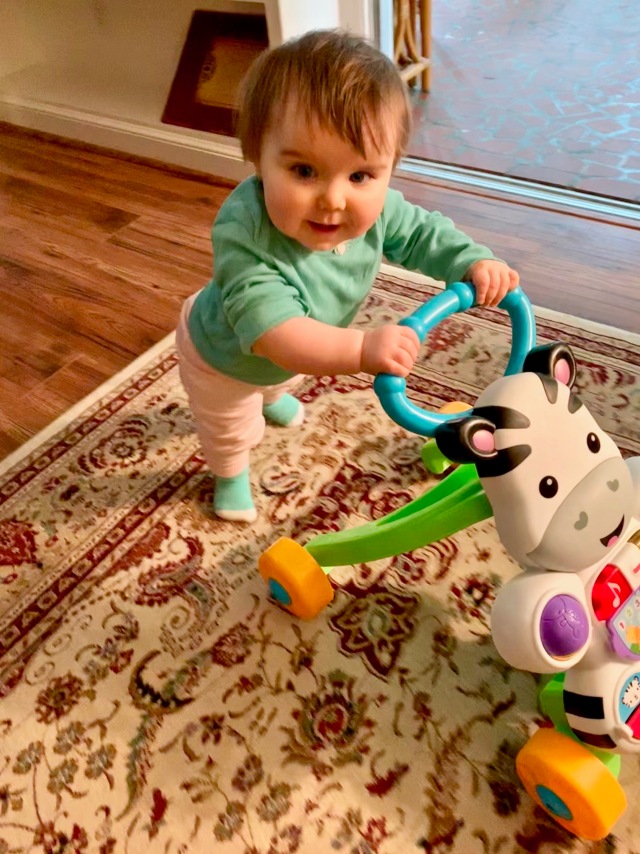 You thought this post was going to be all political, didn’t you?

You thought I was going to throw my two cents into the ring, didn’t you?

Well, I will tell you that despite a government shut down, The Mayor is not slowing down.

We traveled over to spend the weekend with the Mayor.

She wasn’t worried about any shutdowns.
See that’s the glory of kids—they don’t much care what the adults are doing just
as long as their little worlds are flowing.

Little children are good like that…they stay oblivious to adults acting like
sophomoric idiots while allowing the lives of countless individuals to hang in the balance.

They don’t care who’s a Democrat or who’s a Republican…
they just know that they are center stage and that’s pretty much how life flows…
anything else is minutia.

So despite big announcements, Dreamers, Walls, and shutdowns or a stubborn President and an
idiot Speaker of the House, the Mayor was busy.

Busy learning to eventually walk on her own.
Busy learning how to make sounds become words.
Busy getting really tired after being so busy that she falls asleep mid play…

So Thursday morning I went to have a yearly mammogram.
Following that, the endodontist called me explaining they’d had a cancellation and
could fit me 4 day’s prior to my regularly scheduled possible root canal evaluation.

Perfect I thought–knock out the physical traumas all in one day.

As much as I hate having such, I’ve had my fair share of root canals and just
went the suck it up option and to go with the flow.

The tooth had reared its ugly head right around Thanksgiving.
The dentist thought maybe just a crown would help as there was more filling than tooth.

We did the crown.

I went two weeks with a temporary just to see if the sensitivity and pain would ease off.
If they did, the crown would be cemented into place.
If not, off to the endodontist I would go.

Well–things seemed to get better.
So cementing the crown it would be.

Until two days later when the tooth revved up again like nothing had ever changed.

The dentist scheduled my trip to the endodontist.

Of which I went to on Thursday, early.

The root canal was a near 2-hour event.
I was leaned back so far I could have been standing on my head.
I thought my poor neck would give way.

When he was finally finished, he scheduled my coming back for a permanent patch.

Well after 5 hours when the novocaine finally wore off, my mouth and tooth hurt but I chocked that
up to shots and trauma.

I took a pain pill.

Well, the pain and throbbing got progressively worse…
so much so that I had to call the endodontist when I was up with The Mayor–
requesting an antibiotic or a pair of pliers….whichever he felt would be best.

He went with the antibiotic.
It should have been the pliers.

As I type this…I am yawning almost uncontrollably…
and spelling everything very wrong…even for me…maybe it’s the Benadryl.

I don’t normally take Benadryl but I thought it could help with the
overtly severe rash and itching…never mind the throbbing tooth.

Seems the endodontist called in clindamycin… seems as if I’m allergic to clindamycin.

My torso, back, face, ears, neck all look as if I have visited a nudist beach and fell asleep laying out.
Things look burned that have never seen the sun.
Sandpaper like skin…red and itchy.
Not a pretty mind’s eye picture I know no matter how you look at it…
But I’ve never seen anything like this.

I may have had clindamycin once before…years ago for a sinus infection and I might recall
my arm itching–calling the doctor and having to change up meds…
Looking at my red self, that seems to be coming to my memory now.

I wish I’d quit yawing and would quit typing gibberish.

I text back the endodontist this morning explaining that I did not sleep because my tooth
has not stopped throbbing and I am now a giant walking, red as a berry, rash.
Did I mention a throbbing tooth?

Good thing Don talked me into using Grammarly on my computer…
otherwise, you might think I have been drugged. Thank you Don.

Well, I have actually.

I thought a couple of Benedryl could stop the rash.

I told the doctor if he didn’t squeeze me in tomorrow, I was getting my pliers—I’m still
debating so I’ll let you know…

Now I better go make some tea to wake me up.

At least the Mayor took her aides out to supper last night, even if I couldn’t chew.

I’ll use the pliers on my tooth while using a hammer to knock in a little sense into our
elected adult officals.