“The paradoxes of today are the prejudices of tomorrow,
since the most benighted and the most deplorable prejudices
have had their moment of novelty when fashion lent them its fragile grace.”
Marcel Proust

There’s a lot of talk currently in my neck of the woods about snow.
In fact the “talk” is more like a warning of an impending National disaster.

Yesterday while driving into Atlanta to Dad’s…those matrix boards above the interstates
alerting drivers to accidents, etc. were all running the same ominous and foreboding message…
Winter Storm Warning

For much of this hearty country of ours, such approaching weather systems
are no big deal…
it’s just more of the same ol typical winter weather…
but in this tender southern state, those signs might as well have read:
THE END IS NEAR AND WE ARE ALL DOOMED!!!

So this morning, with all the local news forecasting the Apocolypse,
I figured that maybe I should run out to the store to grab another half gallon of milk…
Lord knows I’d hate to be iced in, snowed in or both,
without ample milk for my coffee or any sort
cake or recipe that I may want to whip up while being stranded and cut off
from all civilization…

The shopping center looked like it did a couple of weeks ago during the
Christmas shopping frenzy.
I had passed school buses running basically backwards…
as in they had just taken the kids to school
and now they were bringing them all back home due to the early dismals
in observance of the impending disaster.

While I was making my way through the maze of shopping carts frantically filling up
with survival foods such as chips and sodas…
I debated about picking up something different for supper.

The chicken section was almost empty with only a few errant packs of thigh / leg combos.
When did chicken make the list of the typical disaster foods besides bread and milk?
Of which I am happy to report that the milk section was fully stocked…
or should I make that restocked…

Next stop, the bank.

Fridays are never a good day to go to the bank as everyone is getting paid and
in turn, heading to the nearest bank.
Add impending doom…
and shades of 1929 come racing to mind.

While standing at my teller’s counter there was a couple in their mid 20’s at the teller next to me.
They were loudly lamenting to the gal behind the counter,
and everyone else in line, that they were “tired of being adults.”

Really? ( thought in a monotone of sarcasam)

I chuckled and turned to look at this forlorn lamenting duo.

They continued on about how they were ready to trade in their “adult cards” wanting,
I suppose, to return to the Land of Nod and innocence.
“How,” had they known, “that if life would be like this,”
whatever “this” may have been,
“would have squandered more of their money while trying to “enjoy life” …

I kid you not.

I offered, rather bemusedly, that it doesn’t get any easier…
which certainly didn’t offer any comfort to their sense of gloom and doom…
but then again I am a realist and one who is a believer in the phrase
“aging is not for sissies”

Later back home,
I stumbled upon the reference of snowflake being used with regard to this
same mid 20’s aged group, twice!

Once on a news program discussing the impending inauguration being akin to another
type of apocalypse to many, and that colleges are providing their tender charges
places of calm and comfort, in hopes of soothing their mounting fears.

Another reference came while I was reading the blog of a Scottish pastor waxing on
about today’s colleges which are providing warnings (trigger statements)
to students that biblical studies will have graphic imagery regarding the crucifixion and
veterinary studies will have to discuss such topics as dead animals,
while the forensic students will be seeing, wait for it, dead bodies.
Obviously things all too gory and disturbing for these tender “snowflake’s” sensitive likings.

They are a most fragile lot are they not?
And will certainly melt at the drop of a hat…

Or so it seems as many adults, especially those in higher institutions of learning,
fear as they race to coddle their youthful charges.
And so it is as I am now hearing it first hand with my own ears, while at the bank…
That many of these snowflakes are actually already tired of the real world and
simply want to go back to being “irresponsible kids”….

This coming on the heels of the news of that now infamous and most heinous viral Facebook
story coming out of Chicago…
the story about those 4 young people who were arrested for kidnapping, beating and torturing
a mentally handicapped young man.
Ranting on and on at him about F’ing Trump and F’ing white people while cursing him,
cutting him, taunting him as he was tied up and had his mouth duct taped shut….
They filmed their antics while boasting that they wanted this recording to go viral…
they wanted the world to see what they were doing while laughing all the while doing it.

Chicago’s police chief said that these sorts of horrendous incidents from young thugs would,
in the future, only escalate.

Here we have not so much snowflakes, but rather icicles…
cold and dangerous youth living without
regard for the sanctity of human life.

So maybe those interstate signs should read:
“Warning and Shame”
“We’ve let our youth run amuck and now we are left trying to pick up the pieces”

As our same Scottish pastor laments that the Church herself is as much to blame as anyone for
the wailing of these youthful generations as she has dumbed down Christianity into
a Disneyesque sort of happy fun thought…
where things like sin and death…that whole ransoming of our sins with payment coming
in the form of death on a cross,
being just all too much for this up and coming youthful generation
who are either too sensitive or too callous for the reality of life, death and faith.

Here’s to the impending snow storm…
may we have enough milk, bread and now chicken, to survive….

Snowflake Theologians Given Trigger Warning about the Crucifixion

“Let us be grateful to the people who make us happy;
they are the charming gardeners who make our souls blossom.”
― Marcel Proust 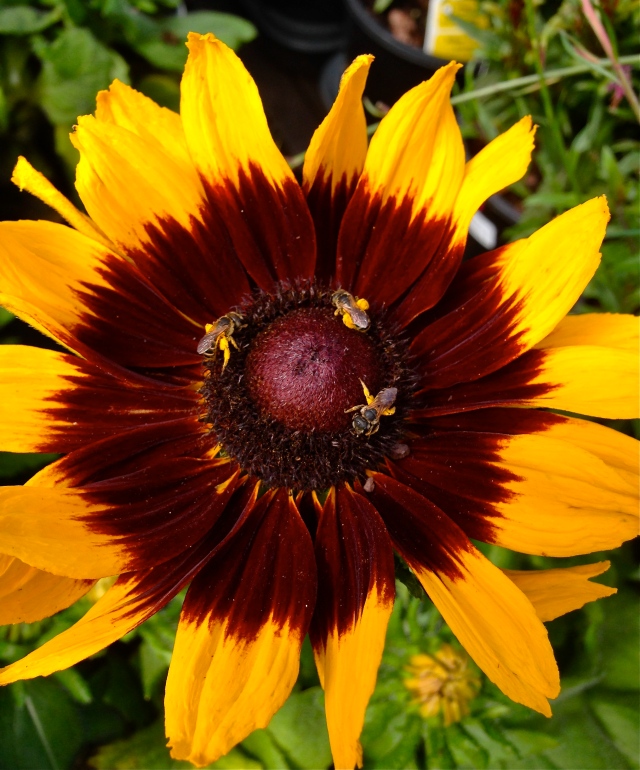 May we all find the strength and courage today to. . .
offer happiness
receive happiness
and simply to relish in
being happy. . .

For You, O LORD, have made me glad by what You have done,
I will sing for joy at the works of Your hands.
Psalm 92:4

“Let us be grateful to the people who make us happy; they are the charming gardeners who make our souls blossom.”
― Marcel Proust

I pray that we have a least one person along the long and wending path we call our life, the one (or multiple) person or persons who has / have taken the time and interest to “garden” along our well traveled path—that rare individual or persons who cares enough that we are happy, healthy and that our souls are indeed ready for full bloom.

I also pray that we may, from time to time, offer our gratitude and thanks to that very individual or individuals who has / have bothered to take such care and time along our life’s path in order to prep the soil, weed the way, hedge the edge and trim the pathway, in order to make room for a long awaited blooming.

On this new morning to the new week, as we prepare to close out one month and transition towards the new month of May, may we be mindful of our life’s path and of the gracious gardeners along that very personal walkway. Here is my heartfelt thanks to those gardeners who have cared enough along my own path to make certain my soul was always ready for blooming.

“Let us be grateful to the people who make us happy; they are the charming gardeners who make our souls blossom.”
― Marcel Proust

These are the moments of life that could easily be taken for granted, or even overlooked in the fray of the craziness of this thing I call my life—but I have been made consciously and palpably aware of the blessings before me.
I am the type of person who is usually hesitant and leery of being overtly grateful as I’m usually the one waiting for the proverbial “other shoe to drop”. . .don’t be too happy because if you don’t watch out, tragedy is just waiting around the corner to descend and cause pain and sorrow.

Yet this overwhelming sense of wonder, the realization that I am blessed in this life of mine more than I take time to recognize, must be acknowledged and not shunned due to some paranoid sense of fear.

So it is with a grateful heart that I offer my thanks and praise to a God who is my God–
A God who is there through not only the good of my life but through the bad that besets itself upon my world as well. To a God who has been and who will always remain a constant in my life despite my not always acknowledging that He is indeed a constant in my world.

Tomorrow all hell may break loose but for today, I will rejoice and be glad. . .

Be strong and courageous. Do not fear or be in dread of them, for it is the LORD your God who goes with you. He will not leave you or forsake you.”
Deuteronomy 3:16

“The only real voyage of discovery consists not in seeking new landscapes, but in having new eyes.”
― Marcel Proust 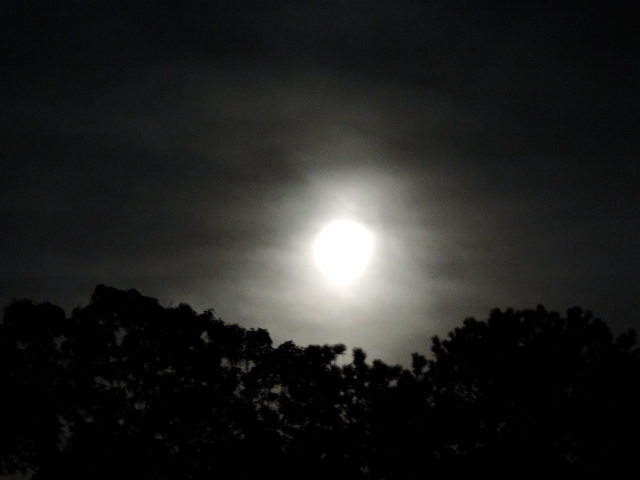 The Advent Season Is A Season of Waiting
Jesus stands at the door knocking (Rev. 3:20). In total reality, he comes in the form of the beggar, of the dissolute human child in ragged clothes, asking for help. He confronts you in every person that you meet. As long as there are people, Christ will walk on the earth as your neighbor, as the one through whom God calls you, speaks to you, makes demands on you. That is the great seriousness and great blessedness of the Advent message, Christ is standing at the door; he lives in the form of a human being among us. Do you want to close the door or open it?
It may strike us as strange to see Christ in such a near face, but he said it, and those who withdraw from the serious reality of the Advent message cannot talk of the coming of Christ in their heart, either. . . . .
Christ is knocking. It’s still not Christmas, but it’s also still not the great last Advent, the last coming of Christ. Through all the Advents of our life that we celebrate runs the longing for the last Advent, when the word will be: “See, I am making all things new” (Rev. 21:5)
The Advent season is a season of waiting, but our whole life is an Advent season, that is, a season of waiting for the last Advent, for the time when there will be a new heaven and a new earth.

I Want To Live These Days With You
A year of daily devotions
Dietrich Bonhoeffer Werke
Barcelona, Berlin, Amerika 1928-1931

(highlight in bold is mine)