“Courage is being scared to death,
but saddling up anyway.”
John Wayne 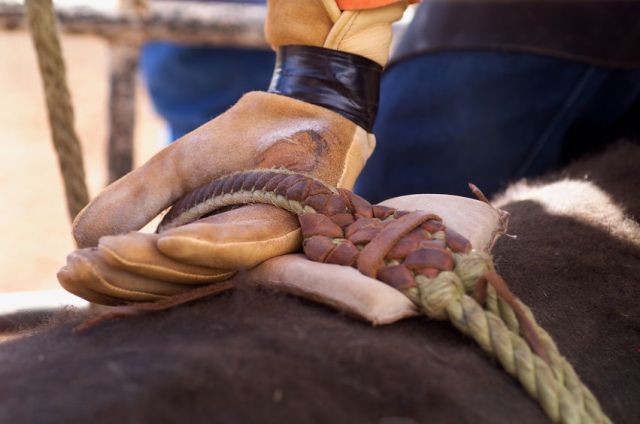 I’ve written about this before but there is a pasture across the road from our house that
is home to a bunch of rodeo bulls.
Ours was not the luck to have horses across the street, although
two do live next door, nor could we even have a peaceful herd of dairy cows, sheep or goats…

Nope—we had to have rodeo bulls.

Loud, very vocal, very smelly, rodeo bulls.
Maybe 50 plus bulls.
Summer garden parties, when the wind is out of the northwest, are not for the faint
of heart at our house…so needless to say, we don’t host any.

We don’t know the folks who keep up the bulls, as they don’t live in close proximity
to the field, but we’re told that they raise them,
or actually pasture them, for local rodeos.

I, for one, think the field looks atrocious and really question the “care” being offered
these animals but like I say, we hear the owners of the field are a curious lot.

Once, a few years back, the fence was so bad that the bulls kept pushing their way through
and would actually wander down the road or into a neighboring subdivision…
and even into our fenced property…
Go figure!

Not much makes them want to move.

The local sheriffs would have a time trying to find the owners while attempting to herd the
animals back to the pasture.

The owners have since put up a new fence,
as word is the county made them an offer they couldn’t refuse,
so the bulls now thankfully remain in their pasture.

I’ve never been to a rodeo but I have caught them ever once and a while when televised on TV…
and I must admit that there is just something a bit intriguing about what it is that
makes a man want to climb on the back of a 1500 pound angry muscle machine,
tying himself to said angry beast, in an attempt to see how long he can stay on the back of
the animal before he is thrown off.

Not to mention the fact that the animal could then easily crush him under hoof or even
gore him with his horns…
Hence the life of a rodeo clown.

The cowboy will tie his hand to the bull using a leather rope known as a bull rope.
This is a means of holding on to the animal while the other hand
waves precariously in the air.

And I suppose if you want to stay up and on, tying a hand to the adversary is the
way to go.
But the hope is, that when the cowboy is thrown, his hand will come lose lest he dangles
haphazardly swinging randomly about attached to the wild flailing animal…
being drug around the arena while the bones in his hand, wrist, and arm snap
like little twigs.

All of this imagery of being tied to a bull came to mind today when I was thinking
about the current plight of most Christians worldwide.

An odd thought perhaps but stay with me a minute.

We are living in a very precarious time.

I write often about the current plight of Christianity worldwide.

Persecution is at a level not seen since the days of the Emperors of Rome.
Even here in our cozy little Western Society, Christianity is under heavy
attack.
It may not be physically brutal but the persecution is very much real, alive,
present and very much active—in a very insidious fashion.

Here is a one-minute snippet of an interview with Jim Caviezel, while on the set
of the filming of The Apostle Paul, when he was asked about Christian persecution:

The other day in the post I’d written about our friend the Wee Flea,
the Scottish pastor David Robertson, and his frustrated lament of being fed up with
measured responses, Mark over on’Thoughts From Mark “Hat” Rackley’
Origins
offered an interesting response to my post…

Mark offered a powerful observation found in scripture regarding the lost generations
and the silencing of the faithful…
“If an entire generation is lost, God will raise rocks to shout praises to Him.”

(When he came near the place where the road goes down the Mount of Olives,
the whole crowd of disciples began joyfully to praise God in loud voices for all
the miracles they had seen:
“Blessed is the king who comes in the name of the Lord!”
“Peace in heaven and glory in the highest!”
Some of the Pharisees in the crowd said to Jesus, “Teacher, rebuke your disciples!”
“I tell you,” he replied, “if they keep quiet, the stones will cry out.”
(Luke 19:37-40)

I was tremendously struck by that passage.

It is a very powerful passage—

Imagine… God easily and readily raising rocks to shout His praise??!!!
For if He wanted such, it would therefore be.

It’s hard enough to herd a 1500 pound bull where it needs to go,
imagine getting a rock to sing.

And so I feel as if it’s time that the faithful tie their hands to the back
of the raging bull….as we fight to hold on…

The ride is not going to be easy nor for the faint of heart.
We will be tested and tried as we narrow our focus to the task at hand.

There will be the occasional distractions, much like the rodeo clowns, but
even the clowns won’t be able to distract Satan from letting loose upon the faithful
in those / these final days…

Tie the rope tight, because the ride is about the begin…

For you yourselves are fully aware that the day of the Lord will come like a thief in the night. While people are saying, “There is peace and security,” then sudden destruction will come upon them as labor pains come upon a pregnant woman, and they will not escape.
1 Thessalonians 5:2-3