When vultures surround you, try not to die.
African proverb

(close up of a turkey buzzard / Lifescience.com)

Look at that face would you?
Look how the nostril just opens through to the other side…
I’ve always heard that, as the garbage men of the bird world, buzzards
can’t smell…well I would certainly hope not!

It is supposedly by their keen eyesight that they are able to scope out and zoom in on the
latest roadkill.

So over the past weekend, since it has been so miserably hot and while we are still
supposedly in some sort of social distancing lockdown…
just don’t tell everyone out on the roadways that, we opted for some idyllic countryside driving.

I don’t know about you but I’ve come to realize that I feel very heavyily burdened.

All the while questions loom heavy overhead…
Will there be school, will there not be school…
will there be a second wave…did we ever finish the first wave…
will they open Chruch…will we just succumb to Marxist ideology and the church will be
rendered dead…should we don a mask or not…

And so pray tell, how much longer will all of this mess go on!?

So as we started driving and I was looking out the window, with the weight of so much
heaviness on my mind, I focused my eyes on something a bit odd…
I noticed a black image sitting atop the steeple of a small country church. 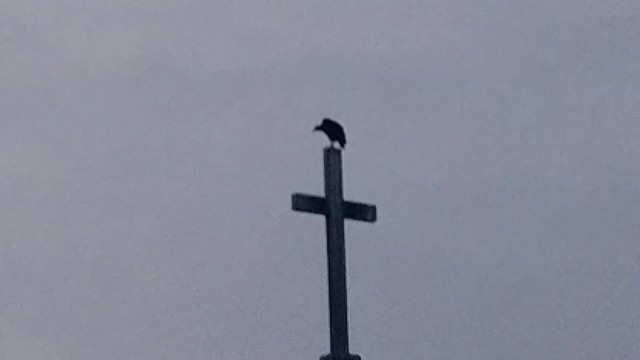 “Oh my gosh,” I exclaimed to my husband, “do they not have any sense of reverence?”
“Who?” my husband surprised by my question responds a bit bewildered.

“Buzzards!”
“There’s a buzzard sitting on top of that church’s cross on its steeple.

“No respect” my husband chuckles.

I wish I had been able to get out my phone to take a picture but the one I found
on-line gives you some idea of what I’m talking about.

I went back to staring out the window while musing the symbology of a specter of death
perched on a cross atop a steeple.

And so wouldn’t you know it, when we were out driving around the following day,
I saw the same thing…but this was another church with another buzzard perched up top.

What are those odds?

Who knows…but what I do know is that there’s got to be a heavy dose of irony
buried somewhere in two different visions of death birds perching on top of a cross,
an image of life.

Yesterday, Tricia, over on Freedom Through Empowerment,
and I were chatting back and forth about the implications of the news over Hagia Sophia
becoming a “working” mosque again mirrored by the Marxist push to attack
Christianity here at home.

We both noted that whatever is to come from any of these latest digs at
the global body of Believers was not going to be good.

For many weeks now a thought has been nagging at the back recesses of my thoughts.
It’s a thought that I believe is being slowly fine-tuned.

This was my response to Tricia—a response I cleaned up when re-reading
my initial reply because there is just something about pecking out a deeply
thoughtful response on a phone while using a thumb.

“Tricia—as a kid, I was always mesmerized by the stories of the early saints and martyrs of the church.
I often imagined living life in early Rome,
sneaking about and worshiping in secret, in the cover of darkness or hidden in catacombs.
I imagine my defiance if ever discovered and arrested.
I would face the torture with fortitude.

Or so thought my youthful bravado self.

Even over the past decade, as we’ve seen more and more about the persecution of Christians worldwide,
I’d like to think I would be courageous.
But here, at home, we have something much more sinister and insidious.
No less full of persecution with the end goal being Christian eradication—
yet am I courageous in our oh so woke society?

Do I take to the streets in defense of my faith?

Churches are being attacked..both here and in Europe and it is not by Muslim extremists…
but by extremists none the less.

I can’t help but think God has prepared you, me, Tom, Kathy, IB, Wally, CS et al,
(just a few of the blogging community of Fatih)
to be those who dare to meet in the catacombs albeit the catacombs of today…
those of our neighborhoods and cities.
Am I willing to risk everything for my faith??
I hope I will be able to answer yes.
Is this a preparation of an ending, a clash of both Good and Evil—–
of course, we can’t answer that…but it sure does feel like it.”

And so I’ve come to view my buzzard friends as both a symbol as well as a reminder.

Death has always smugly desired to sit upon that which has always promised life.
Yet those of us who are true Believers, and trust me, there are many today
who call themselves “believers” but who are not…are here for a reason.

I asked this same question just the other day…and like the other day, I couldn’t say,
I can’t say… but what I do know is that it sure does feel like it.

So I think we need to get ready.
Catacombs and buzzards seem to be waiting!