“I take comfort in the fact that somehow,
in the mysterious resources of the human spirit,
even pain can serve a higher end.”
Dr. Paul Brand

“I don’t pray that you may be delivered from your troubles.
Instead, I pray that God will give you the strength and
patience to bear them.”
Brother Lawrence 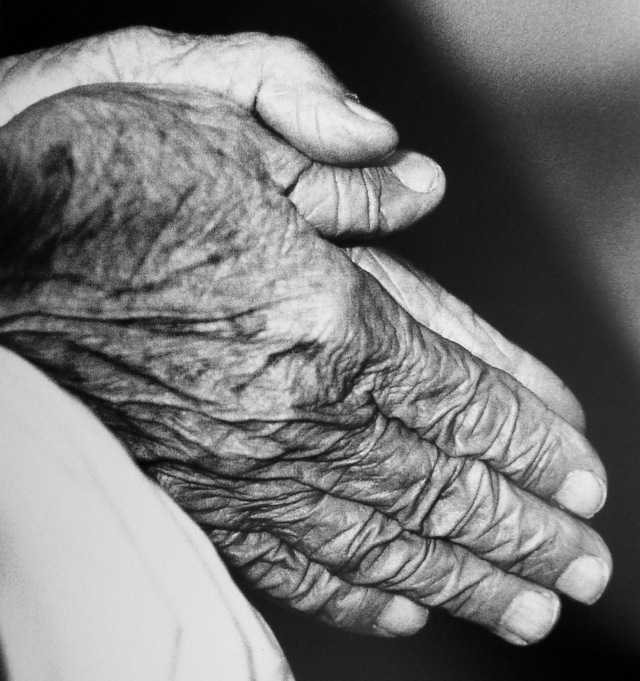 (the hands of Mother Teresa / A Photographic Record by Michael Collopy)

And the feet in question were not just any pair of feet,
but rather the tired and worn feet of a relentless saint of a woman.

A woman, mind you, Pope Francis most recently declared a saint.

For some, especially my high school students…at the time I had originally shared the photograph,
the image of her feet were hard to look at…
for the image was that of a pair of feet that had not lived a pampered life
but rather a life of back breaking labor, toil and work….

And we are each the better for those feet.

In the commentary of the post, a dear friend of mine lovingly and sweetly reminisced
about the rough and worn hands of her grandmother.
Recalling the vivid details that had been etched on her young heart.

There is a post unto itself in her very touching words…

“What practical effect does Christ’s identification have on the person who actually suffers?
A dramatic example of the effect of this truth was seen in
the ministry of Dr Paul Brand while he was working among leprosy patients in Vellore, India.
There he preached a sermon, one of his best known and best loved.
At the time, Brand and his workers were among the few in the area who would
touch or closely approach a person with Hansen’s disease—townspeople quarantined them.
Brand slipped in late to a patients’ gathering,
sitting on the mat at the edge of an open courtyard.
The air was heavy with combined odors of crowding bodies,
poverty, stale spices, treated bandages.

The patients insisted on a few words from Dr Brand,
and he reluctantly agreed.
He stood for a moment, empty of ideas, looking at the patients before him.
His eyes were drawn to their hands, dozens of them,
most pulled inward in the familiar “leprosy claw-hand,” some with no fingers,
some with a few stumps.
Many patients sat on their hands or otherwise hid them from view.

“I am a hand surgeon,” he began and waited for the translation into Tamil and Hindi.
“So when I meet people, I can’t help looking at their hands.
The palmist claims he can tell you your future by looking at your hands.
I can tell your past.
For instance I can tell what your trade has been by the position of the
calluses and the condition of the nails.
I can tell a lot about your character,
I love hands.”

He paused and looked at the eager faces.
“How I would love to have had the chance to meet Christ and study his hands!
But knowing what he was like, I can almost picture them, feel them.”

He paused again,
then wondered aloud what it would have been like to meet Christ and study his hands.
He traced the hands of Christ,
beginning with infancy when his hands were small, helpless, futilely grasping.
Then came the hands of the boy Jesus, clumsily holding a brush or stylus,
trying to form letters of the alphabet.
Then the hands of Christ the carpenter—
rough, gnarled, with broken fingernails and bruises from working with saw and hammer.

Then there were the hands of Christ the physician, the healer.
Compassion and sensitivity seemed to radiate from them,
so much so that when he touched people they could feel
something of the divine spirit coming through.
Christ touched the blind, the diseased, the needy.

“Then,” continued Dr. Brand,
“there were his crucified hands.
It hurts me to think of a nail being driven through the center of my hand,
because I know what goes on there,
the tremendous complex of tendons, and nerves and blood vessels and muscles.
It’s impossible to drive a spike through its center without crippling it.
The thought of those healing hands being crippled reminds me
of what Christ was prepared to endure.
In that act he identified himself with all the deformed and crippled
human beings in the world.
Not only was he able to endure poverty with the poor,
weariness with the tired,
but–clawed hands with the cripple.”

The effect on the listening patients,
all social outcasts,
was electrifying.
Jesus—a cripple,
with claw hand like theirs?

Brand continued.
“And then there were his resurrected hands.
One of the things I find most astounding is that though we think of the
future life as something perfected,
when Christ appeared to his disciples he said,
“Come look at my hands,’ and he invited Thomas to put his finger into the print of the nail.
Why did he want to keep the wounds of his humanity?
Wasn’t it because he wanted to carry back with him an eternal reminder
of the sufferings of those on earth?
He carried the marks of suffering so he could continue to understand the needs
of this suffering.
He wanted to be forever on with us.”

As he finished, Paul Brand was again conscious of the hands as they were lifted,
all over the courtyard,
palm to palm in the Indian gesture of respect, namaste.
The hands were the same stumps, the same missing fingers and crooked arches.
Yet no one tried to hide them.
They were held high, close to the face, in respect for Brand,
but also with new pride and dignity.
God’s own response to suffering made theirs easier.

T.S. Elliot wrote in one of his Four Quartets:
The wounded surgeon plies the steel
the questions the distempered part;
Beneath the bleeding hands we feel
The sharp compassion of the healer’s art
Resolving the enigma of the fever chart

The surgery of life hurts. It helps me, though, to know
that the Surgeon himself, the Wounded Surgeon,
has felt every stab of pain and every sorrow. 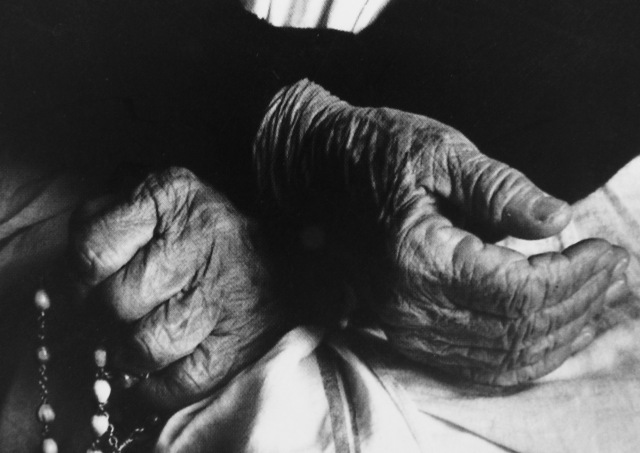