Do you ne’er think what wondrous beings these?
Do you ne’er think who made them, and who taught
The dialect they speak, where melodies
Alone are the interpreters of thought?
Whose household words are songs in many keys,
Sweeter than instrument of man e’er caught!
HENRY WADSWORTH LONGFELLOW

If you’ve followed much of cookiecrumbs for any length of time, then you know I love my birds.
Not the Atlanta Falcons or Hawks mind you nor some sort of pet parakeet but rather those beautifully wild birds which frequent my yard.
I just love all the various wild birds that either call my yard their permanent home or those more transient species who just happen by on a short lay over as they travel onward to wherever it is they go. . .

I enjoy the commotion on the feeders, especially after a recent replenishing.
I relish those fleeting occasional sightings of some rare bird making an impromptu pitstop.

From hummingbird to hawk, I love my birds.

Yet sadly there have been three incidents as of late which have left me rather troubled and to be honest, quite sad.

I realize that Nature is Nature–wild and free so to speak.
There’s that whole food chain thing going on. . .
The survival of the fittest. . .
That whole eat or be eaten mentality. . .
All out taking place in that yard of mine.
Be it raccoon, copperhead, rat snake, possum, mole, armadillo, coyote, bobwhite, bobcat, buzzard, cardinal, robin, turtle, lizard, chipmunk. . .living harmoniously is certainly a very fine line.

First my bluebirds.
We’ve had a family of bluebirds here in our yard for as long as we’ve lived in this house–a good 16 years. Offsprings return each year and continue raising generation after generation.
I have several boxes up for their choice of nesting.
Last year, on Mother’s day of all days, you may remember the whole bird box incident with my husband and how Mrs Bluebird did not have a happy mother’s day. I was shocked they decided to actually come back, giving us a second chance, but we won’t relive that little trauma drama right now. . .

I had watched with keen interest this Spring as mom and dad bluebird were first busy building a nest in the box of choice and then secondly how they worked in tandem to feed the hatchlings.

Yet oddly one strange day, all was silent. There was no activity of the usual flying back and forth. No little rising crescendo chorus greeting the latest tasty morsel of worm or bug delivered for meal time—a never ending mealtime.

I watched the box for a couple of days before taking my chance. . .I eased up to the box, twisting the latch to check inside.
I found nothing.
It was still too soon for the babies to have “flown” the proverbial coop—I fretted that a raccoon or snake or feral cat had had it’s way one dark and sinister night with my wee blue family. . .

Fast forward a couple of weeks when, once again, I notice a bevy of activity. Mom sitting with her tiny head poking out of the hole as if she was on patrol as Dad made the deliveries of tasty takeout.
This went on for about two weeks, when once again, out of the blue, nothing.
No noise,
No commotion,
No movement,
No mom.
No dad.

So once again after watching the box intently for several days, I slowly inched my way to the tree, lifting the latch. . .this time, resting gently in place were 5 beautifully blue eggs. Alone.
Mom and Dad had left the box. . .
But way?

The other seemingly tragic event came around the same time as the first bluebird batch disappearance.
There was a mockingbird who had built a nest in close proximity to the bluebirds box, with its nest perched up in a Tea Olive tree.
Mother and dad mockingbird were fiercely protective and equally as busy as Mr and Mrs Bluebird.
Mom had laid several beautiful eggs that hatched into several tiny little balls of fluffy down.

Yet oddly, their nest grew quiet at the same time as the bluebirds. . .which certainly raised my suspicions as to what was taking place in the cloak of darkness.

Lastly the final insult to injury for my beloved birds. . .

A couple of weeks ago I had shared a post featuring our new redheaded woodpecker family.
The first couple of these gorgeous birds to call our yard home. They were truly magnificent birds to watch purely because of their striking colors. A brilliant red head offset by the white and black body feathers.
I was so proud that this pair of beautiful birds had opted to call my yard home.

Their range was rather wide as I would often see them flying off to the woods across the street at the back of the neighbor’s pasture. They began to enjoy sitting on our black fence with runs the length of our property along the road. I imagined the pickings for bugs must have been ideal along the fence.

Last week, at the end of one long hot day finally returning home from Dad’s, I turned to pull into the driveway when I noticed what appeared to be a dead bird lying on its back in the middle of the driveway. Immediately I could hear my own voice echoing in the car “NO, NO, NO. . .”
Stopping the car to investigate further, my initial assumption was sadly was confirmed—-it was one of the woodpeckers.

(my beautiful redheaded woodpecker is no more / Julie Cook / 2015)

From my observation I noted some blood around the beak and sadly surmised that the bird perhaps had flown out and up at the same time a car had came barreling down the road.

I brought the bird down to the house and took it out in the back to bury it.

I always feel privileged when I am afforded a glimpse into the lives of the animals, birds, reptiles, fish that I share my little piece of the planet with. . .I’ve always felt as if God has given me a tiny precious gift each encounter, each observation. . .be it here in my own backyard or along the shores of the ocean or in the wilds of Alaska. . .Those created creatures both majestic and beautiful, wild and free. . .creatures I am tasked with, as a steward of the planet and created creature myself who God entrusted with responsibility, to care for, honor and respect. . .

I am thankful for their presence in my world as they remind me of God’s grace as well as joy—as He must have taken great pleasure in their creation. . .

Here’s to my birds—may better days grace your horizons. . .

Ode to the birds.
They are lively busy creatures offering constant fascination and entertainment. A marvel of agility, their tiny, almost weightless, structures coupled with a most beautiful plumage, makes them a favorite of both the trained, as well as the casual, observer.

Man has spent most of his existence wishing that he too could be a free as the birds, soaring upward and heavenward.
It is even theorized that perhaps it is to the birds we should look when wishing to understand the mysteries of the dinosaurs.

The following images are of just a few the backyard residence and guests which call our yard either home or hotel. . .

Here are two different images of a northern flicker. Both the red bellied woodpecker and the northern flicker are native to this area. Both birds are very similar in appearance and make for interesting observation.

Flickers like digging for bugs and insects be it in the ground or on a tree. This particular flicker is burrowing down in the snowy ground looking for what may be lurking just under the snow. Both flickers and red bellied woodpeckers will readily feed from suspended bird feeders, preferring larger seeds, peanuts and dried fruit.
Up against a tree, the flicker acts very much like his kin the more common woodpecker, poking around for insects. 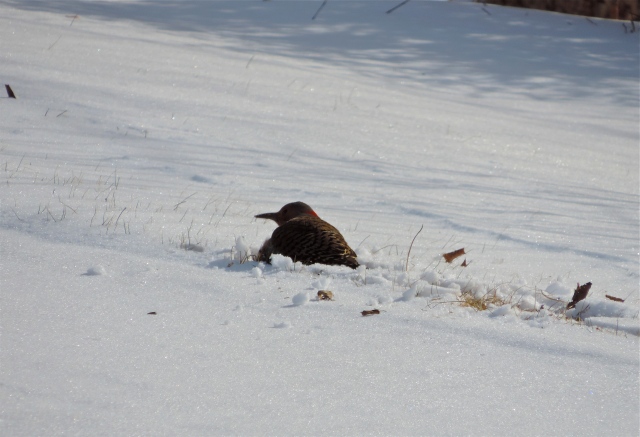 Mystery in the snow. . .
Note the outline of spread wings and tail.
Might this be a snow angel of sorts?
Followed by, for some small rodent no doubt, a scene of something most wickedly fowl / foul.
Finally, we spy the perpetrator perched high within the cover of the trees—the stealthy red shouldered hawk. 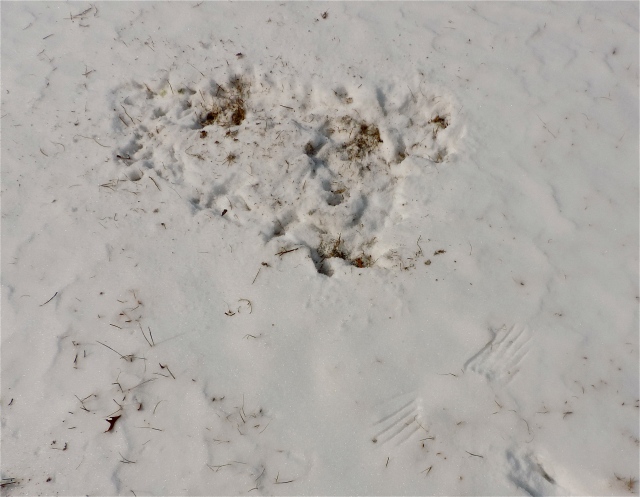 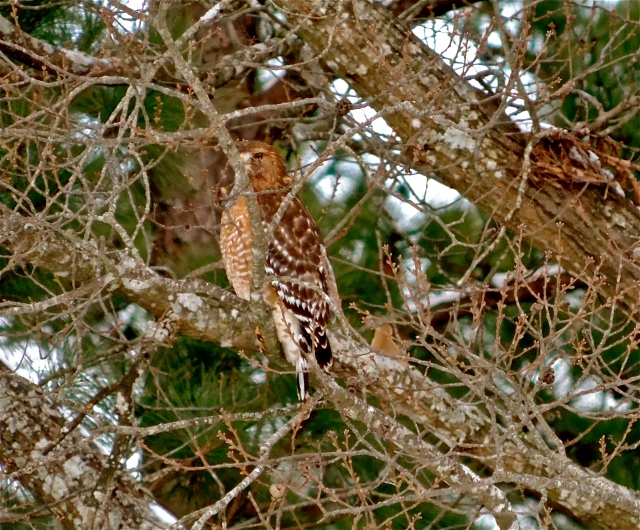 Here, gathered underneath the feeder, is a grouping of sparrows and what I thought to be a visiting Baltimore Oriole but was recently corrected (12/12/14) that the bird is actually an Eastern Towhee.

As usual, the permeant resident of the yard, our mockingbird

And of course the beautiful contrast of the brightly colored male red cardinal against the pristine snow. Note the myriad of bird tracks all through the snow surrounding the cardinal.

“The beauty of the natural world lies in the details.”
— Natalie Angier

Once the vibrant colorful leaves of Autumn give way to the dismal browns and grays of winter’s decay. . .as the leaves gently fall, or are more aptly blown away, from the trees and bushes by the great winds of the north— Mother Nature begins to reveal a few of her little secrets.

Just when we begin settling into thinking the visual wonders and colorful overloads of the previous seasons have come and gone, leaving us visually empty and hungry as we prepare to live in a world of muted tones, we are kindly offered a tasty little morsel or two of her visual surprises.

It may be when we dash outside in order to gather a couple of sticks of wood for the fire that we delightfully discover who, or better yet what, has lived within the cover of the leaves– tucked deep within and protected behind the multiple layers of branches surprisingly under our very noses without so much as the first inkling of existence—be it a bird, a fox, a rabbit. . .

There is a thorny mound of a bush just off to the side of the driveway. Originally the mound started out as three little crimson leaved barberry bushes. Given the very nature of a barberry bush, the concept of pruning and maintaining becomes quite a tricky sticky business—-which in turn makes a barberry an ideal “home” for an adept little creature—in this case, a small wren. 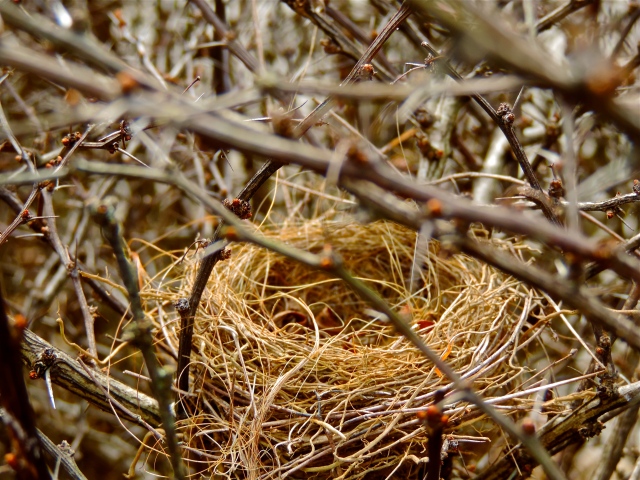 Whenever I have to tend to or with the barberry “bush”, I always fondly recall the children’s classic story by the southern author Joel Chandler Harris, Uncle Remus. Say what you wish about the book, the stories, the author— I have always found the book a classic tale intertwined to and with a time long ago as it possesses a delightful innocence of folklore and imagination—a post Civil War Aesop’s fable of the American South…nothing more, nothing less.

And it appears that the wrens, as well as the mockingbirds and the blue jays also understand the logic of Brer Rabbit. . . 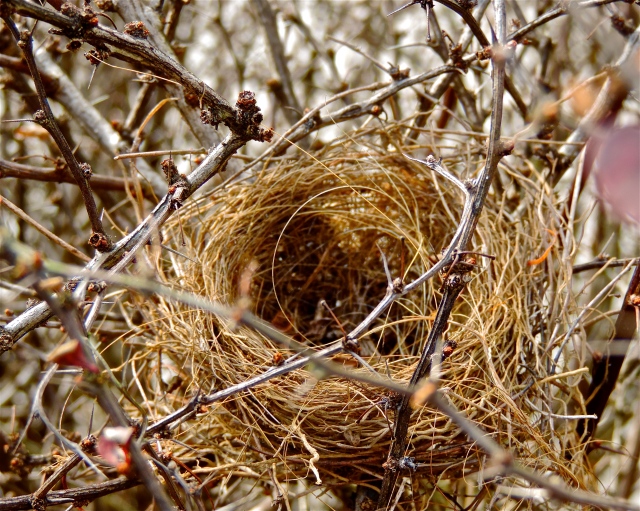