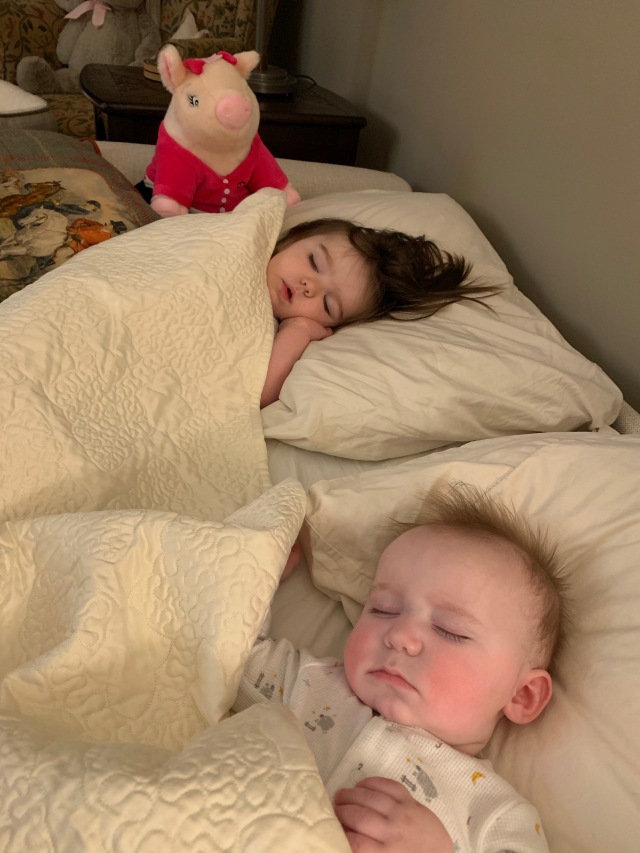 I just got home from spending the weekend with the Mayor and Sheriff.

Leaving is always so hard.

When I’m up visiting and since there are now two babies…
there are now no spare bedrooms and thus my “bedroom” is in the den on
a sofa sleeper.

That means that I have officially turned into my aunt Martha as that
is how it worked years ago in our little world when our son was a baby.

So now when I visit, the Mayor usually sleeps with me, Moppie…
but last night the Sherrif had fallen asleep before his mom has everything situated,
so the two of them “rested” until everyone got to the right bed!!!

Yet we all know that all of this peacefulness will quickly change once the sun rises
and the day is afoot as the energy of little people is recharged and renewed!

Reminds me somewhat of werewolves and vampires—but in this case, things are reversed.
Angels at sleep—whirling dervishes with tempers and demands by day…

But it’s all actually really quite grand—despite the exhaustion of adults!

Time for a soothing cup of tea for Moppie!

(let not the Mayor’s restful demeanor fool you for one minute—
aka hell on wheels! / Julie Cook/ 2019)

Our grandchildren accept us for ourselves, without rebuke or effort to change us,
as no one in our entire lives has ever done, not our parents, siblings,
spouses, friends–and hardly ever our own grown children.
Ruth Goode

Somewhere between having kids and by the time those kids become “grown”…
the notion of having grandchildren, and becoming a grandparent, trickles
ever so sweetly into one’s thoughts.

And maybe even more so if you yourself had had a special relationship with your own grandparents.

Of course, you most certainly need to have some time in between your children leaving the nest
and their actually growing into their own before you can even allow yourself to
entertain the thought of more wee ones in your life!
But the older you get, the more those types of thoughts invade both your mind and heart.

And so all this grandparent talk came racing to the forefront of my thinking recently,
in a rather poignant way, when I was talking with a new acquaintance.
This new friend reminded me of what it means to want to be a grandparent.

This friend was recounting the day doctors had told her she had stage 4 breast cancer,
kidney cancer as well as liver cancer….giving her only 2 weeks to live.

The short-long of this story, of which was about 6 years ago or so,
and as we now see has had a truly a miraculous ending…is not what one might imagine.

When told you only have two weeks to live…I’m not certain what your first thoughts
are suppose to be.

Do you panic?
Do you get mad?
Are you resigned?
Or, in the case of my friend, do you think of what might have been?

When my own mother was told such at the age of 53, her first response was that she
really had wanted to play tennis again.
But that was pretty much my mom…

So what this new friend of mine had told me, that which was her initial thought after hearing such news,
was actually quite telling.

This was at a time in her life when her sons were still relatively young and just entering college.
The thought of them marrying and having their own children was a very distant fantasy.
Yet my friend revealed that when the doctors told her she had but weeks to live,
her first and only thought was…
“and to think, all I’ve ever wanted was to be a grandmother…”

And so yes, there is indeed something truly magical about being a grandparent.

I was fortunate in that I knew both of my grandmothers and one grandfather,
a man who I lost way too soon…when I was but only 7.

To this day, I cherish the memories I forged with each of them…
as they left important imprints on my very being.
They helped to mould me into who I am today.
But perhaps no more so than that of my grandfather as he continues to loom large and lovingly
in the memories of
the 7-year-old little girl who remains in my psyche.

My grandparents were known as Mimi, Nany, and Pop.

My dad was later ‘Pops’ to our son as was his brother, my uncle, to his own grandkids.

So when the time came in our own lives, when my husband and myself were to become grandparents,
the formation of names became a hot topic.

Our son wanted us to have more traditional names—names he was familiar with—those of
“grandmother and papa” since “pops” was a bit too sacred for him.

I, on the other hand, wanted to be more unique…
Names with character and staying power.
So I thought “Moppie and Poppie” sounded really cute.

Not too dorky or silly but really grandparent-like.

Still, I was determined.
I was going to be Moppie by gosh.

That was until the day I was actually called ‘Biya’ and my husband was called ‘Da’ by the one person
who the names were to be the most pertinent.

BIYA????
What the heck??
I get ‘Da’ as that is connected to what the Mayor calls her dad, DaDa—so it makes sense the older of the
dadas would be Da.
But Biya???

How and where she came up with Biya is beyond my soul.

When they call us on the phone and when she hears my voice—
it is immediately a constant shouting of BIYA, BIYA, BIYA…

My grandmother, Nany, got her name because her young nephew, my dad’s cousin, couldn’t say
‘Aunt Annie’—-so a butchered form came out as ‘nany’—and so Nany stuck.
And thus for about 70 years of her 86 year long life, she was Nany and Nany only to all of
us who knew and loved her.

So when in doubt I did what we all do…I googled.

The word Biya is actually a real word.
Who knew??

It is Arabic in origin.
And it is a current word in both Pakistan and India…Sanskrit actually…
a word that means ‘goodness’, ‘courageous’ or more importantly, ‘gift to God’…

So in her 18-month-old infinite wisdom, The Mayor has deemed that I shall be of goodness and
a gift to God…

I’ll take that name in a heartbeat and I pray that I will be able to live up to this
most precious gift she’s given me.
Because she and her brother, the New Sheriff, are the best gifts my life could have ever received.

(The Maror showing a little love to her Sheriff)

(the Mayor sporting shades for a day out at the beach)

He thought that he was sick in his heart if you could be sick in that place.”
James Joyce

Someone has gotten the “croop” so Moppie and Poppie have been called into duty.
With that said, I’m out of pocket for a few days…

Have I not commanded you? Be strong and courageous. Do not be frightened,
and do not be dismayed, for the Lord your God is with you wherever you go.”
Joshua 1:9

Freedom is the most contagious virus known to man.
Hubert H. Humphrey

Well, our wee one has been quite sickly this past week with a nasty virus.
Yet the doctors have requested some tests run…so…we shall see.
With that said, know that I am back up in Atlanta on “moppie” duty.

And since I’ve not had time to create a new offering for today…
I’m going to share what I read two days back on the blog our friend the Wee Flea.

I found his words a great reflection on one of the latest idiocies racing around
these United States.
And as there are perhaps too many circuses running around this great land of ours…
perhaps it takes the vision of a Scotsman, one who sees things for what they truly are,
to open our eyes to our own pitiful state of affairs…and as he so pointedly reminds us
that in the end…it is only one thing we all need…the need we each have for the
one true Savior…

Enjoy the link below based on a tale of
Sermons, weddings, and funerals…