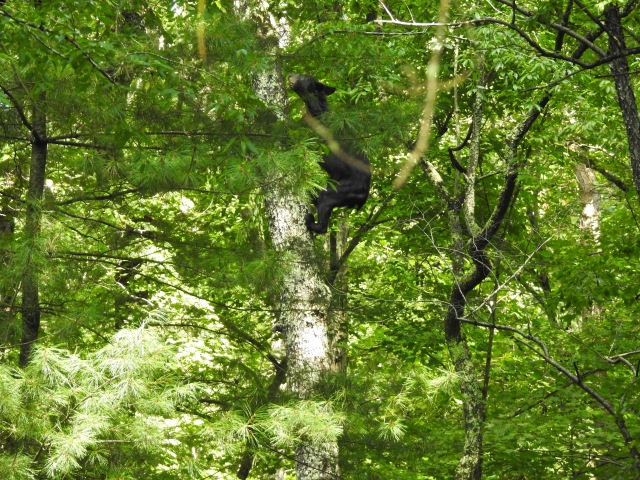 We’ve come up to Tennessee, to Cades Cove for a couple of days.
It is by far one of my most favorite places on earth…as I have seen some mighty grand and
lovely places on this planet. But Cades Cove is special.

I’ve written about Cades Cove before so I won’t go into all of that all over again
but just know that it remains a small remnant of who and what settled this great
land of ours.

Today in the Cove (an 11-mile one-way loop around what was once an early 19th-century
mountain valley settlement and centuries-old Indian territory)
we actually came upon two bears climbing like nimble footed acrobats
to the tip-top branches of the trees…
there were berries.

Cars had stopped as everyone got out, careening necks upward while staring in amazement,
watching these two big black bears acting more like squirrels.

As the day waned, we made our way back to the cabin where we were staying and
decided to go hike some of the nearby trails.
We had been told upon check-in that there was a bear on the property so just be
vigilant when out and about.

Making our way up a narrow trail, my husband leading the way with his long spider stick
waving precariously in front of him like some sort of crazy conductor’s baton
(a stick or twig used to knock down all the webs that are prolific this time of year)
all the while as I lagged slightly behind with my camera snapping pictures of the various
mushrooms and toadstools and yes, spider webs…

Suddenly my husband stops dead in his tracks and urgently announces BEAR.

About 20 feet in front of us, at the bend in the trail, lumbers a very large mother
black bear with two tiny cubs in tow. 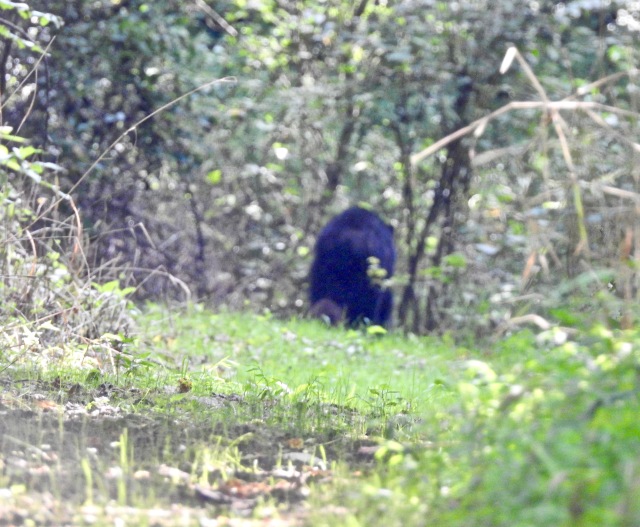 I threw my camera up as fast as I thought I had life left to do so in order to snap a shot,
a shot I didn’t even have time to focus, when mom and babies nonchalantly kept
walking around the curve in the path….
all the while as we prayed she wouldn’t turn and charge at us.

We just stood there as she rounded the turn and disappeared.
Then boldly, or brazenly I’m not sure which, we opted to take a few steps forward just
to see which way they were headed when suddenly one of the cubs pops back around
the corner to take a gander at us before he circles back to mom.

At which point we turned and took another trail.

Once back down to the main road we spied a maintenance worker who we decided should
hear our report of seeing a mama bear with cubs on the retreat’s property.

He casually replies “yeah…they’ve been around awhile, best to keep your distance
but that’s nothing…
two weeks ago I was standing right over there when a mountain lion came
out of nowhere and crossed the path right in front of me…
but these darn spiders…now they’re what really bothers me”

We opted to leave him our spider stick for protection.

The wild animals honor me,
the jackals and the owls,
because I provide water in the wilderness
and streams in the wasteland,
to give drink to my people, my chosen,
Isaiah 43:20